Recently, C.K. made headlines for a lengthy email he sent to fans urging them not to vote for Republican candidate Donald Trump – because he’s like Hitler. 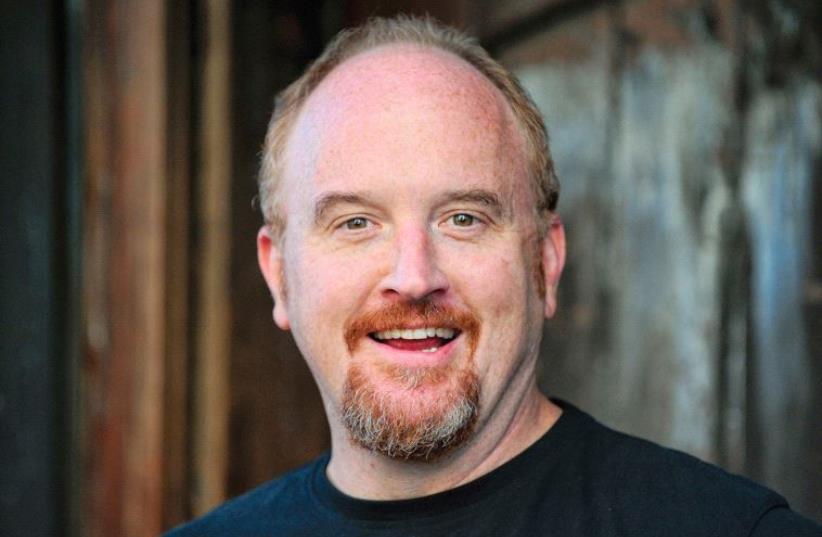 Louis C.K
(photo credit: REUTERS)
Advertisement
After months of anticipation, comedic genius Louis C.K. will be performing two stand-up shows in Jerusalem this Thursday.C.K., 48, will take the stage for two shows on the same night, after tickets for the first show at the Pais Arena sold out within hours of going on sale.What’s bringing the famed comedian, actor, director, writer and producer to Israel this summer? A need for cash, it seems.In an interview with Howard Stern earlier this year, C.K. told the radio host that he was “millions of dollars in debt” after making a new webseries, Horace and Pete, and one of the ways he’ll be making some of the money back is going on tour this summer.“I’m going to Israel, and I’m doing a show in, like, a soccer stadium or something there, and I’ll get as much money over there as I would here at home,” he told Stern.The radio host replied, “Millions.Yeah, the Jews have money.”C.K. quipped in response: “I’ll play anywhere doing my act for money.”Indeed, tickets for the shows range from NIS 285 to NIS 735.Regardless of his reasons, Israeli fans of C.K. are thrilled about the chance to see the dark, crass and often vulgar performer in person.And with any luck, he’ll dive right into the messy Middle Eastern conflict – as he has in the past.In his opening act while hosting Saturday Night Live last year, C.K.noted how so much has changed since he grew up in the 1970s – “except the Middle East is exactly the same. It’s exactly the same as it was in the 1970s; it’s been the same fights, and you know what, it’s boring now, that’s the worst part of it.”He went on to discuss how the relationship between his two daughters is just like the Israeli- Palestinian conflict.“My kids are like Israel and Palestine, and I’m like America,” he said. “The little one’s like Palestine because she always gets screwed; she gets the worst deals,” C.K. joked.“She’s like ‘She threw a rock at my face,’ and I’m like, ‘You’re fine. You have a great life, you have to take a rock to the face once in awhile. you’re fine.’” “The older one,” he continued, “is like Israel. She comes up to me like, ‘She burned all my dolls!’ I’m like, ‘Look, I can’t do anything about it right now. Your sister is crazy, please don’t make me talk to her. I’ll work it out, you and me. We’ll go out, I’ll buy you a really cool missile, and whatever you do with it is totally up to you.’” C.K. got his start as a writer for comedians like David Letterman, Chris Rock and Conan O’Brien, and today is arguably one of the most prominent and successful comics. He currently stars in Louie, a semi-autobiographical sitcom that C.K. created, wrote and directed. He also has the starring voice role in The Secret Life of Pets, which dominated box offices this summer and has grossed more than $400 million worldwide. Plus, on a hiatus from Louie, he created and starred in Horace and Pete, a dark comedy that has received critical acclaim.Recently, C.K. made headlines for a lengthy email he sent to fans urging them not to vote for Republican candidate Donald Trump – because he’s like Hitler.“Please stop it with voting for Trump,” he wrote. “It was funny for a little while. But the guy is Hitler. And by that I mean that we are being Germany in the 1930s. Do you think they saw the shit coming? Hitler was just some hilarious and refreshing dude with a weird combover who would say anything at all.”C.K. is known for tackling topics that many steer clear of, including abortion, 9/11, suicide, child molestation and the Holocaust.In a 2010 stand-up show at New York’s Carnegie Hall, C.K., who has Jewish roots on his father’s side, discussed how he was flipping channels one night and came across the film Schindler’s List.“There’s a scene where all the Jews are being forced out of Warsaw… and there’s a little girl, standing on a mailbox, about eight years old…. And she’s watching them and she goes “Goodbye, Jews!” he recounts. “And because I know how movies are made, I know they had to go and find an eight-year-old girl who could nail that shit. So somewhere there’s a tape of like 50 little girls, trying to get the ‘Goodbye, Jews’ part.”Indeed, C.K. is unapologetic for his act, no matter who may be offended. In a 2012 appearance on The Daily Show with Jon Stewart, he said, “For me, any joke about anything bad is great. That’s how I feel. Any joke about rape, the Holocaust... any joke about something bad is a positive thing.”Later, he told Stewart that men and women arguing over joking about rape should set aside their differences and “let’s all get back together and kill the Jews.”So who will he offend in Jerusalem? If history is any indicator, the answer is everyone.