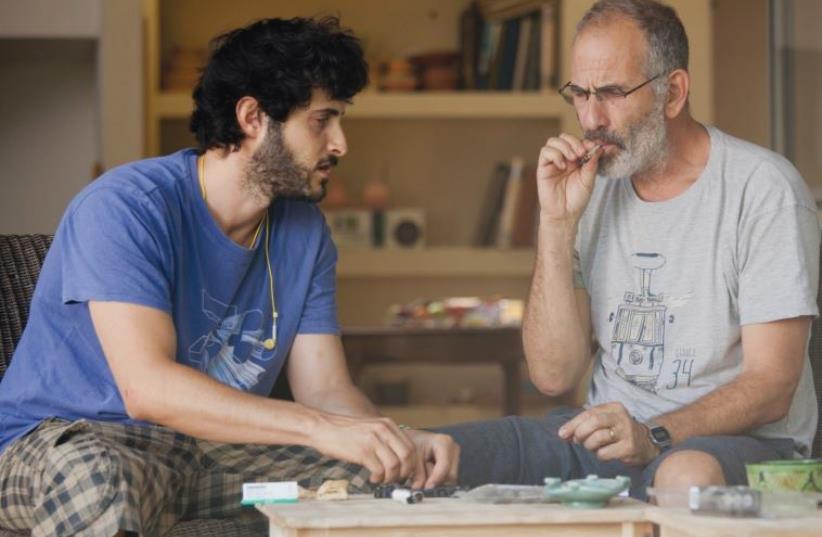 ASAPH POLONSKY’S ‘One Week and a Day
(photo credit: VERED ADIR)
Advertisement
The 33rd Jerusalem Film Festival, which took place at the Jerusalem Cinematheque from July 7-17 and featured a star-studded guest list topped by Quentin Tarantino, Laurie Anderson and Whit Stillman, announced its awards at a festive ceremony on Thursday.This year, there were prizes in an international competition for the first time. The festival has traditionally concentrated on recognizing Israeli films, and the Israeli feature competition has always been the most closely watched and highly anticipated in the festival, but now the festival has added new awards for foreign films.In a very competitive year for Israeli feature films, Asaph Polonsky’s One Week and a Day won the Haggiag award for Best Israeli Feature Film, which includes a cash prize of NIS 120,000. It also picked up two awards for Best Debut Feature and Best Screenplay, as well as the FIPRESCI (the International Federation of Film Critics) Award for Best Israeli Debut.The movie, which would have gotten my vote if I had been on the jury, is about parents grieving the loss of their adult son and how they spend the first day following the end of the shiva.The jury, comprised of Andreas Sinanos, Azize Tan, Boyd van Hoeij, Esther Hoffenberg and Assi Levi said: “For a constant and impressive command of tone and his fine work with a small cast, this young director displays a surprising maturity.”It won a prize at the Cannes Film Festival last May where it made its international debut, and will be released in Israel in a month.The other Israeli feature film awards were spread among several of the participating films.The Haggiag Award for Best Actress went to Shiree Nadav-Naor for her performance as a troubled teacher in Eran Kolirin’s Beyond the Mountains and Hills.The Haggiag Award for Best Actor went to Moris Cohen, who played a club bouncer facing a moral dilemma in Meni Yaesh’s Our Father.The Van Leer Award for Best Cinematography went to Yaron Scharf for Ori Sivan’s Harmonia.The Haggiag Award for Best Music went to Ruth Dolores Weiss for Guy Raz’s We Had a Forest.The Audience Favorite Award went to Saving Neta, directed by Nir Bergman.The Van Leer award for Best Israeli Documentary Film, with a prize of NIS 35,000, was presented to Dimona Twist by Michal Aviad. The film is about seven women who arrived in Dimona in the Fifties and Sixties from more cosmopolitan settings in Poland and North Africa.The Van Leer Award for Best Director of a Documentary went to Maya Zinshtein for Forever Pure, a look at the issues of discrimination against Muslim players in Beitar Jerusalem soccer team. It also won the Haggiag Award for Best Editing for Justine Wright and Noam Amit.The winner of the inaugural edition of the international competition was The Death of Louis the XIV by Catalan director Albert Serra. The film had its world premiere in Cannes’ official selection and stars the legendary French actor Jean-Pierre Léaud, who plays the Sun King as he struggles with the reality of his own mortality in his final days.This award came with a prize of $20,000.The jury was comprised of Cornerstone Films’ Alison Thompson, the Icelandic director Grímur Hákonarson (Rams) and the Israeli director Talya Lavie (Zero Motivation), who praised Serra “for creating a bold and distinctive chamber piece in a beautifully detailed world. For its stunning set design and cinematography that captures its period brilliantly. For creating an intimate and moving look at the sunset of a great figure in history.”The Danish Oscar nominee, A War, by Tobias Lindholm, received an honorable mention from the international jury.The artistic director of the Jerusalem Film Festival, Elad Samorzik, said, “Along with making sure these essential films get seen here, we want to open up a larger space for these works and filmmakers in terms of distribution and overall exposure in Israel. It’s been a great launch for the section and we are looking forward to another rich line-up next year.”The FIPRESCI Award for Best International First Film went to Album by Mehmet Can Mertolu, of which the judges said, “An original, unique and eclectic look at contemporary Turkish society, Album combines bizarre humor, a confident tone and a cohesive artistic vision to address [such] subjects as conformity, bureaucracy and adoption.”The In the Spirit of Freedom Competition in Memory of Wim van Leer, the late husband of Lia van Leer, the founder of the Jerusalem Film Festival and the Jerusalem Cinematheque, presented several awards, among them the Cummings Award for Best Feature Film which went to The Chosen Ones by David Pablos. The Ostrovsky Award for Best Documentary Film was given to Hooligan Sparrow by Nanfu Wang. An Honorable Mention went to Exile by Rithy Panh.In the Israeli Short Film Competition, the Van Leer award for Best Short Film went to Facing the Wall by Alamork Davidian; the Van Leer Award for Best Director of a Short Film went to Moshe Rosenthal for Leave of Absence; the Van Leer award for Best Short Documentary went to The Mute’s House by Tamar Kay; the Van Leer Award for Best Short Animation Film went to Head by Stav Levi.There were a number of awards in the Experimental Cinema and Video Art Competition.The Lia Van Leer Award, donated by Rivka Saker, went to Ishmael by Nira Pereg.The Ostrovsky Family Foundation Award was given to Naamah: A Tribute to Nahum Benari by Hila Ben-Ari; and an honorable mention went to The Wedding by Elham Rokni.In The Jewish Experience category, the Avner Shalev – Yad Vashem Chairman’s Award for Holocaust-Related Films was given to No Home Movie by Chantal Ackerman; the Lia Van Leer Award for Films about Jewish Heritage went to Harmonia by Ori Sivan; an Honorable Mention went to Forever Pure by Maya Zinshtein.“Seeing the sold out theaters day after day and hearing the Jerusalem Cinematheque’s hallways buzzing with conversations – that’s the biggest reward we can ask for,” said festival director Noa Regev.