Variety abounds at the Israeli Opera in Old Acre Festival. 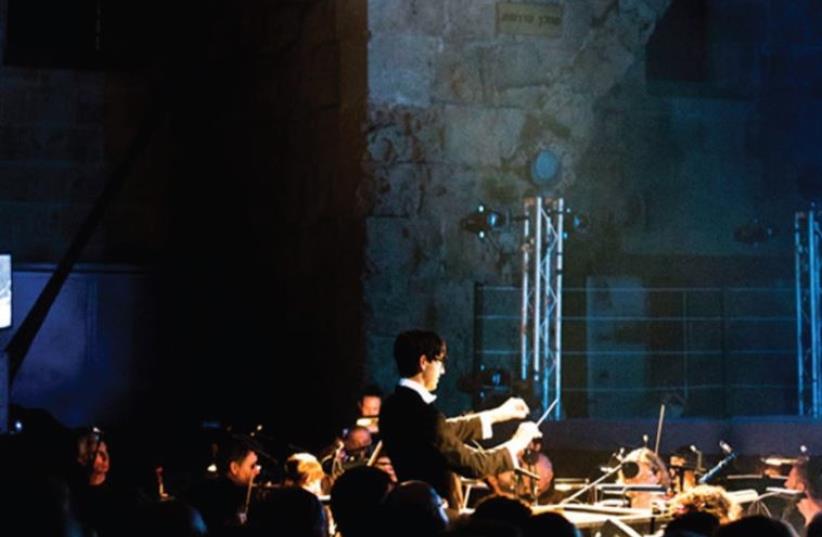 The Israeli Opera in Old Acre Festival
(photo credit: YOAV FILLY)
Advertisement
Singspiel is not a particularly new idea. It has been around for almost four centuries, when the form was used as the substratum for so-called miracle plays, which were based on biblical tales of fantastic, divine doing. By the 18th century they were in common use as an elemental core of operas which incorporated spoken dialogue alongside the regular vocal material. “Singspiel” is a Germanlanguage portmanteau made up of the word for “sing” and the word for “play” or “act.”Mozart’s Die Entführung aus dem Serail (The Abduction from the Seraglio) is a prime example of the mixed discipline format and is based on a libretto by Christoph Friedrich Bretzner. The storyline concerns the attempt of the hero Belmonte, assisted by his servant Pedrillo, to rescue his beloved Konstanze from the seraglio (harem) of Pasha Selim of Turkey. The work premiered on July 16, 1782, at the Burgtheater in Vienna, with the composer himself on the conductor’s dais. The upcoming rendition will be sung in German, but the spoken dialogue will be delivered primarily in Hebrew, with some Arabic. There will be surtitles in English.Opera fans can enjoy two performances of the work in Acre as part of the Israeli Opera in Old Acre Festival, which will take place in the Knights Hall on July 28 to 30.The festival’s theme is multiculturalism. In addition to the Mozart opera production, directed by Shirit Lee Weiss, with Daniel Cohen wielding the baton, the threeday festival takes in an intriguing cross-cultural item called “Latino – Ladino,” starring renowned countertenor Yaniv d’Or alongside the Barrocade and NAYA ensembles, with soprano Hila Baggio filling a guest slot and Ethan Schmeisser conducting. “Latino – Ladino” takes the listener on a meandering magical tour through the musical terrains of Spanish, Jewish and South American traditions. The onstage fare also takes in a variety of authentic instruments from oud and viola da gamba to Baroque guitar and harpsichord. “Latino – Ladino” will be performed on July 29 at 9 p.m.The entertainment triptych is completed with three daytime family-friendly 60-minute performances of a Hebrew translation of Mozart’s opera The Magic Flute on July 30 (11 a.m., 1 p.m., 3 p.m.).The opera singing lineup features Israeli Opera debutante soprano Gan-ya Ben-gur Akselrod as Konstanze; Canadian-born tenor Nathan Haller as Belmonte; and Norwegian bass Gustav Andreassen as the Pasha’s entertainingly nefarious overseer Osmin.Andreassen’s role involves navigating his way through one of Mozart’s most complex arias, “O, wie will ich triumphieren” (O, How I Will Triumph).Performing what is essentially a traditional theatrical acting role in the midst of typically grandiose operatic endeavor must be a pretty daunting task or, at the very least, a little strange. The principal dialogue role in Die Entführung aus dem Serail is filled by feted 37-year-old Christian Arab actor George Iskandar. He learned his craft at the Ramat Gan acting school Beit Zvi and has excelled in productions at the Arab- Hebrew Theatre, Habima National Theater and Gesher Theater. He has also undertaken plenty of film work, including notable appearances in Return to Life, Bethlehem and Sabena. In 2015 he won the Gold Porcupine Award in 2015 for Best Supporting Actor in the show The Peacock of Silwan. This is his Israeli Opera debut.Iskandar is certainly up for the job but says it is exciting and challenging in equal parts.“This is my first encounter with opera on stage. It is a genre I have never touched upon before,” the actor admits.Artists should, by rights, welcome the opportunity to tread new creative ground, and Iskandar welcomes the chance to contribute to an operative production, even if he doesn’t get to sing.“This is a genre that has its own rules. There is a lot of physical acting involved, a lot of facial work, lots of facial expressions and lots of body movement,” he says.The actor says that while he plays one the main characters, he is fully aware of the fact that as a non-singer participant, he generally takes a back seat to the musical offerings.“The main focus, of course, is on the operatic material,” he notes, adding that his undertaking in Acre is akin to jumping into the water at the deep end.“As a theater actor, I have texts which fuel the way I act. But, in this opera, there are long periods in which I am silent. So I have to work exclusively with my senses, my emotions. I can be on the stage, without any text at all, during an aria of, say, seven minutes. That is quite a challenge,” he says.Iskandar says he was almost literally blown away by the power of the music-making around him.“When you stand next to an opera singer, half a meter away, and you listen to the singing, you are swamped by vibrations, right through your body. It is immensely powerful,” he observes.For someone who admits to having seen a total of one opera in his life prior to the upcoming production in Acre, that must be quite a wake-up call.“It’s like being closed up in an enclosure with a lion roaring up close,” he chuckles. “Opera is such a physical experience,” he says.If the Knights Hall audiences respond to Die Entführung aus dem Serail with even half of Iskandar’s scale of emotion and wonderment, the Israeli Opera is on to yet another winner.For tickets and information: (03) 692-7777 and www.israel-opera.co.il. For accommodation information: www.ozrothagalil.org.il.