‘Our Little Sister’…full of grace and beauty 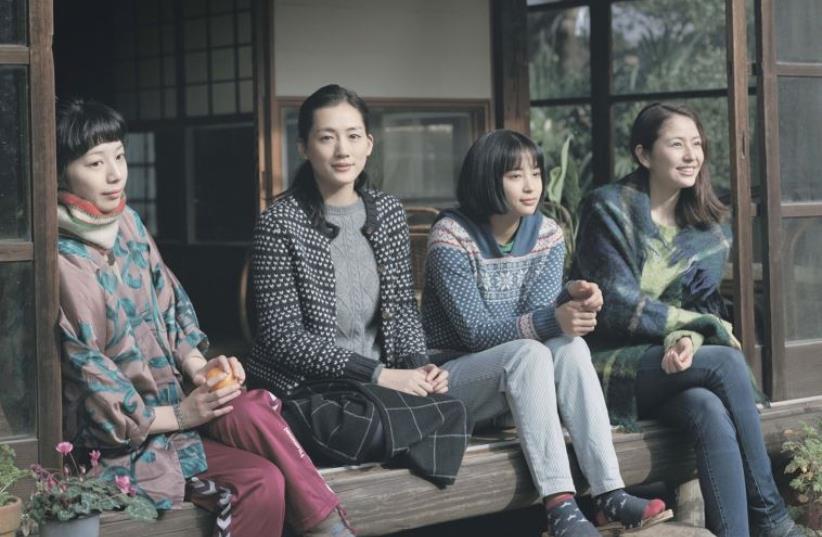 ‘Our Little Sister'
(photo credit: PR)
Advertisement
It takes an extremely talented director to make a movie that is sweet but not saccharine, beautifully photographed but not showy or static, low key but not dull, and deeply moving but not mawkish. Hirokazu Koreeda’s latest film, Our Little Sister, manages to be all of those things and more.As a Japanese director, his work has drawn comparisons to Yasujiro Ozu, best known for Tokyo Story and other quiet movies about family life. But I also saw echoes of the work of the young Francois Truffaut, particularly the Antoine Doinel dramas Stolen Kisses and Bed and Board. There is the same collection of seemingly random elements that blend into a beautiful story and the same generosity of spirit.Our Little Sister, probably the most accessible film to have competed for the Palme d’Or at Cannes in decades, is based on a graphic novel that was published in a magazine for flower enthusiasts in Japan. It tells the story of three sisters in their 20s who live in the most beautiful seaside village imaginable, in a ramshackle house that belonged to their grandmother. Their father left the family when they were young for a woman with whom he had a child, and he never saw them again. Their mother remarried and left for a remote city when the girls were teenagers. The sisters responded by growing very close, with Sachi (Haruka Ayase), a nurse, as the authority figure in the group.Yoshino (Masami Nagasawa) is a romantic who falls for guys who take advantage of her generosity and works at a bank. Chika (Kaho) is a bit of a clown and works in a sport-shoe store, where she is carrying on a romance with the manager, a kindred spirit with an afro, who boasts about losing six toes in a climbing expedition on Mount Everest.Even though they all have men in their lives -- Sachi is in an unsatisfying relationship with a married doctor who won’t leave his clinically depressed wife -- the sisters are so close that no outsider can ever break into this family circle or lure them out. Their lives revolve around routines -- making plum wine from the fruit they grow in their garden, eating at the diner run by a kind woman who is a like an aunt to them -- and they are happy together.But the movie opens with an event that changes their lives: the death of their father. Even though they haven’t seen him in years, they travel to his funeral. He was no longer married to the woman for whom he left their mother -- she died years before. But they instinctively dislike his third wife and widow, who makes a big show about having taken care of him. But they realize that it is the daughter of his second wife, Suzu (Suzu Hirose), who really took care of their father when he fell ill. They sense that Suzu does not feel comfortable with her stepmother and, impulsively, Sachi asks Suzu to move in with them. Suzu, just as impulsively, accepts.The movie details how the sisters build a life with their halfsister and, by doing so, forgive both their parents for their choices. It may be an ordinary story, but it is transformed by the extraordinary charm of the actresses and the beauty of the setting, which mirrors their inner grace.All the actors are wonderful, but Haruka Ayase is the standout.This 30-year-old actress has great presence that reminded me of Meryl Streep at her age. She shows how Sachi is carrying the burden of their parents’ coldness and is crumbling under the strain of trying to make everything right.Koreeda has made some other memorable films, among them last year’s Like Father, Like Son, about babies who were switched at birth, and the 1998 cult classic After Life, about a world beyond death in which people are asked to choose a memory to reenact.This movie is more episodic and less plot-driven than his previous work but no less enjoyable. For some, Our Little Sister will be too slow, but anyone who can stick with it will be rewarde