The MozART group puts an amusing spin on classical music. 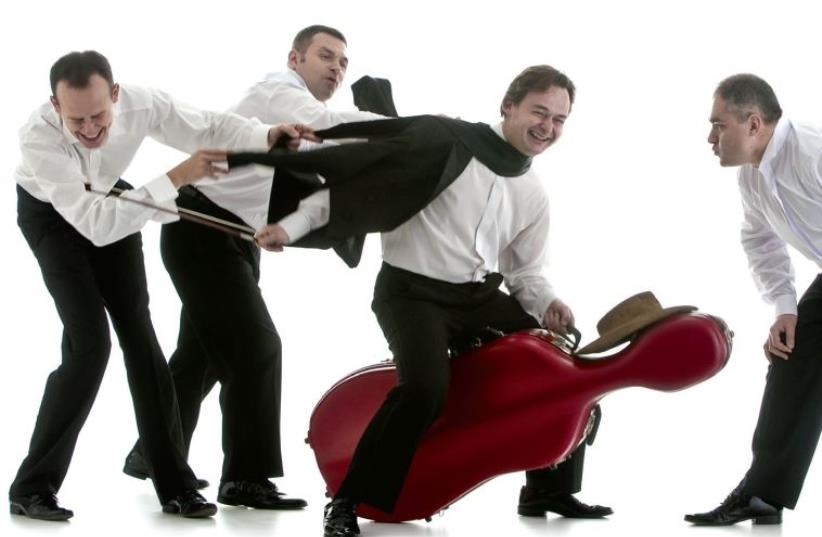 The MozART group
(photo credit: PR)
Advertisement
Most would agree that classical music is serious business. For many, that lies at the core of its charm; but for others, it weighs a mite heavily.You could certainly put violinist Filip Jaslar and cellist Bolek Blaszczyk in the latter category and, for that matter, the rest of the MozART group – violinist Michał Sikorski and viola player Paweł Kowaluk.Consider the group’s declaration of intent on the quartet’s website, and you get the irreverent entertainment picture: “We exist despite the sober formality of great concert halls, despite the boredom of classical musicians’ life, despite fanatic lovers of classical music, despite fans of rock, rap or pop who are afraid of classical music.We treat our muse with a humorous irony, and we’re sure she will have nothing against it!” Residents of the environs of Tel Aviv, Jerusalem and Haifa will be able to catch the madcap musical act in full flow on June 23 (8:30 p.m.), June 24 (1 p.m.) and June 25 (8:30 p.m.), respectively, when the Polish foursome comes to Israel to do what it has been doing so well and to such great acclaim for two decades across the globe a full 4,000 times.The members of the group are all in their 40s, and jokingly I put it to Blaszczyk – at 47, the doyen of the bunch – that maybe it was time they grew up and stopped fooling around with classical music.“Now I am more full of humor than I was when I was young,” the cellist declares unapologetically.“When I was young, I was more serious. As an ensemble, we smile more and more with time.”That is evident after just a couple of minutes of seeing any MozART show. Take, for example, Jaslar’s dexterous turn of managing to keep to the other musicians’ beat while they play Scott Joplin’s ragtime hit “The Entertainer.” While that would be a given with Jaslar on violin, he actually keeps time with a ping pong bat and ball. There’s more, many more antics tailored to keep the members of the audiences in stitches. There’s also some tap dancing in there, naturally while the musicians maintain the instrumental part of the performance; and Blaszczyk does a side-splitting stunt on balloon to a sonic backdrop of Elvis Presley’s hit “Can’t Help Falling in Love.”But any impression that the boys from Warsaw are in the humor business because they couldn’t make it as bona fide classical musicians should be summarily nipped in the bud. These guys paid their dues and attended prestigious academies before deciding that things were getting a little heavy for their liking.“We will never be so serious as we were at school,” Blaszczyk continues. “When we were at school, we were very afraid of the teachers, our parents, and what they would say and how they would judge us. But now we are free. We enjoy very much what we do, and we are happy. Now there is no reason to be serious.”Millions of people around the world will vouch for that. The group joined fun-oriented forces in 1995, initially performing throughout Poland before spreading its touring wings across Europe, North America and the Far East.Jaslar says he began his wisecracking even before the quartet started out. “When I was still a student, I loved to make people laugh. I liked to make jokes in the classroom.”That naturally evolved into band-based fun. “We got the group together because we wanted to entertain people with a string quartet. That was the beginning of the MozART group,” he explains.Fair enough, but the violinist also admits there was some significant vested interest in there, too.“We wanted to entertain people, but we also wanted to entertain ourselves, of course. The most important thing is to entertain ourselves,” he says.The choice of titular composer was a natural choice.“Mozart was a bit like a rebel, and he did his job in an uncommon way,” says the cellist. “He wrote a lot of music and he wrote it very fast, but he was also very charming for some people and very angry for others.”But possibly most important, the iconic composer shared the Polish quartet’s tongue-incheek mindset.“He also had a very good sense of humor,” Blaszczyk notes. “And he wrote a lot of letters to his wife and family. He was really an extraordinary guy. I think what made him so popular is that he was so communicative with his music.”There is, it seems, plenty of common ground between the early 19th-century composer and the merry troupe heading this way.“We also work a lot, and we like to see people enjoying our art,” says Blaszczyk, adding that if the Austrian had the services of a time machine, he would have dug the Polish foursome’s fun endeavor.“We are sure that Mozart likes the MozART group. He has been our patron for 21 years. I think that the ideas for new pieces for our quartet come straight from Mozart,” the cellist laughs. “I can’t prove it, but I am sure that Mozart still helps us to make the group do what we do. I think he is proud to be the patron of our quartet. I hope so.”There should be laughs aplenty all round when the MozART group comes here, with Wolfgang Amadeus’s full approval.