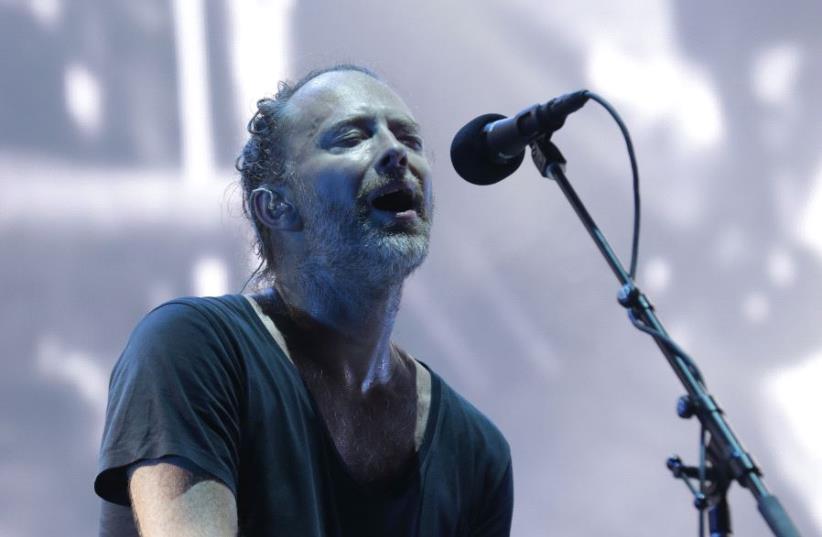 Radiohead concert in Israel, July 19
(photo credit: LIRON SCHNEIDER/ARIEL EFRONI)
Advertisement
The last time Radiohead performed in Israel was in 2000, just before the release of the divisive Kid A, an album which saw the band move toward more experimental music, and away from the guitar- driven sounds of its first three albums.If at the time it seemed an artistic gamble, there was no sign on Wednesday night that many fans had abandoned one of the most celebrated bands in the world, as thousands packed the Yarkon Park venue in Tel Aviv.This was never going to be an ordinary rock concert, due to the attention it had garnered from the BDS movement, and in particular Roger Waters, in their attempts to have Radiohead cancel its show.And as Thom Yorke sang during “Paranoid Android”: “When I am king, you will be first against the wall, with your opinion which is of no consequence at all;” the boycott movement had failed to convince Yorke to cancel Radiohead’s fourth appearance in Israel.Opening with “Daydreaming” from its most recent album, Radiohead began the night with a mellow vibe, followed by “Lucky,” a live favorite from its now 20-year-old classic, OK Computer.
Radiohead concert in Israel, July 19, 2017 (LIRON SCHNEIDER/ARIEL EFRONI) Over the course of the twohour- plus concert they played songs spanning their entire career, covering every album.Sometimes the casual Radiohead listener looked somewhat lost and perplexed as they played rarities from Insomniac, and The King of Limbs, but when they launched into the thrusting “2+2=5” and the driving “Bodysnatchers” the audience was wide awake and paying attention.Yorke didn’t address the crowd much during the night or introduce the rest of the Oxford-based band, but he humbly thanked everyone for coming on more than one occasion.He also got to say ‘Yalla.’ The band returned to the stage twice, each time playing more fan favorites from the old days, like the aforementioned “Paranoid Android,” “Lotus Flower” and “No Surprises” to name but a few, but it was its second encore that really pumped the crowd.After noting that the next song was first played way back in Israel in 1993, they launched into the rarely played “Creep” followed by “The Bends,” and “There There.”If anyone was waiting for Yorke to mention Roger Waters, and to address the pressure they had to endure from fellow artists to cancel the show, then they would have been disappointed.Before the final song of the night, “Karma Police,” he simply stated: “A lot has been said, and in the end we played some music.”Hopefully now that Radiohead came and played a triumphant show, it can be a bridge for more bands, who may have been influenced by Waters and the BDS movement, to perform in this country.They finished the night singing the refrain from “Karma Police”: “For a minute I lost my self, I lost myself,” and for more than two hours we lost ourselves.