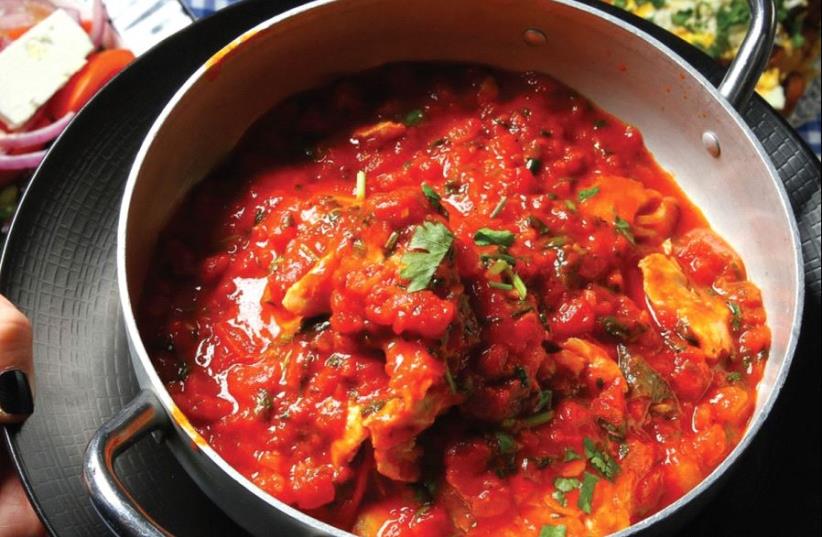 Ramat Hasharon’s Jacko restaurant
(photo credit: PR)
Advertisement
The name Jacko has been associated with fresh fish and seafood for decades, since its inception as a fishmonger in the Haifa shuk and its first restaurant in that port city. Over the years, the chain expanded to Netanya and Tel Aviv, with the latter branch now relocated to an industrial zone in Ramat Hasharon.Jacko Seafood’s blue-and-white color scheme makes the décor of the restaurant unmistakably Greek, and the atmosphere turns 100% Greek on Wednesday nights, with lively music from our Mediterranean neighbor. In addition, every three weeks, Shimon Parnas, host of the TV show Taverna, plays to a generally full house.Still, the major draw here is the food. And the menu has just undergone a substantial makeover.All the starters are new, as well as a few of the house specials. The updated English menu comprises First Courses, Pasta/Rice, Specials, Fish, Seafood and Meat (which includes chicken). There is also a children’s menu.There are no specialty cocktails, but there is a limited wine list and three brands of beer.A meal at Jacko Seafood starts with an impressive spread of mezze, along with the house bread – fresh baguette. The salads are included in the price of a main course or special or may be ordered on their own for NIS 42.No fewer than 11 small plates of mezze, plus a large tossed salad of coarsely chopped tomatoes, cucumbers, onion and cubes of feta cheese, filled our table as we waited for our first course.Of the plentiful mezze, the most noteworthy were a creamy eggplant mousse; rich white ikra; oily matjes herring; fried cauliflower with tehina; and baked eggplant in tehina.Moreover, the superior, deliquality chopped liver was surprisingly good for a seafood restaurant.We chose our main course from the list of five Jacko specials: saganaki shrimps (NIS 98) – a generous portion of plump, juicy shrimp bathed in a sublime mixture of olive oil, white wine and feta cheese. Happily, we were given more baguette with which to mop up every last drop of the delicious sauce.From the Seafood section of the menu came Nissim’s Ghalieh (NIS 98/180), which is actually available in a choice of three sauces, and not just the one specified on the menu. We decided on the Dijon mustard and cream sauce for the fine mix of shrimps, mussels, crab and calamari. The perfectly balanced sauce ideally enhanced the assortment of exceedingly fresh seafood, without overpowering it.From the Meat section of the menu, our waitress recommended the medallions of beef filet (NIS 120). The sizable medallions were like two small steaks – tender, juicy and flavorful – and as good as one might expect from a restaurant specializing in meat.The restaurant manager insisted that if we did not have dessert, it was like not having eaten at all.The selection of both Western and Middle Eastern desserts made deciding difficult, so we were glad the owner suggested we leave the choice to him. He brought us malabi in cherry syrup (NIS 30), a white custard that was sweet, light and not too much after a full meal.His second recommendation was another Levantine dessert: kanafeh (NIS 35), an irresistible combination of mellow cheese wrapped in shards of crispy kadaif that had been gently soaked in a delicate syrup.Jacko Seafood has evidently chosen to restrict the chain’s growth in order to maintain its high standards of quality, making a trip out to the suburbs of Tel Aviv well worth the journey. For those who can get away weekdays between noon and 5 p.m., there is a wide range of business lunches that offer a main course, all the mezze and a soft drink for prices starting at NIS 49.The writer was a guest of the restaurant.Jacko
Seafood
Not kosher
8 Haharash Street, Ramat Hasharon
Tel: 053-937-9159