Roll over ELO and tell Jeff Lynne the news 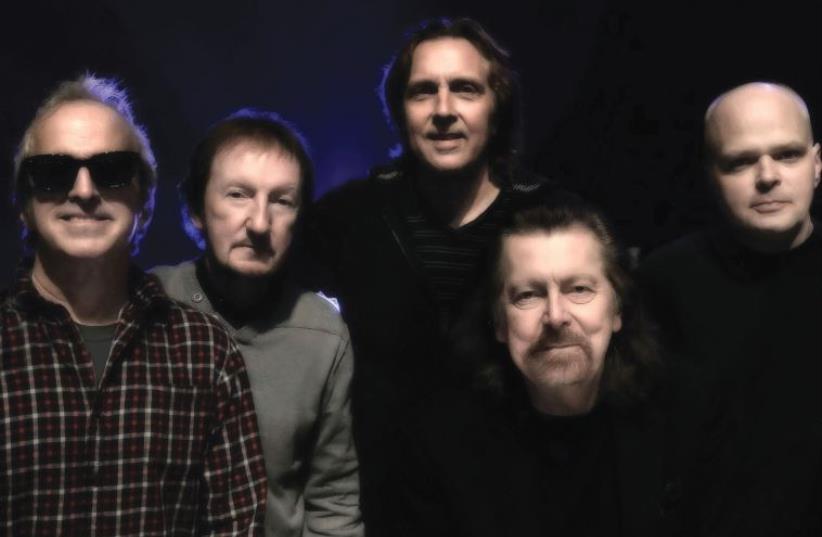 Members of The Orchestra: From left; Glen Burtnik, Mik Kaminski, Eric Troyer, Louis Clark, Gordon Townsend
(photo credit: Courtesy)
Advertisement
It’s certainly not as catchy as ELO – or even the Electric Light Orchestra – but The Orchestra (Starring ELO Former Members) is on its way to Israel for three shows at the end of July. Regardless of the awkward name that was settled on by the suits and ties in the legal offices, the shows will be full of hummable, lush 1970s ELO pop compositions like “Mr. Blue Sky,” “Don’t Bring Me Down, “Can’t Get It Out of My Head” and its signature cover song “Roll Over Beethoven.”Of course, the founders of the band – graduates of 1960s British rock cultists The Move Jeff Lynne and Bev Bevan – are long absent from the mix. Lynne put ELO to rest in the 1980s to focus on a solo career and join fellow rock aristocrats George Harrison, Bob Dylan, Roy Orbison and Tom Petty in The Traveling Wilburys.Drummer Bevan kept the ELO sound alive with ELO II, featuring original violinist Mik Kaminsky and bassist Kelly Groucutt.However, when Bevan retired at the end of the 1990s, another evolutionary change took place when the remaining members crowned themselves The Orchestra.

Members of The Orchestra: From left; Glen Burtnik, Mik Kaminski, Eric Troyer, Louis Clark, Gordon Townsend, Parthenon Huxley.
(photo credit: Courtesy)
“We’ve had many legal discussions, to say the least. Jeff has the rights to the name ELO, so we settled on The Orchestra,” Kaminski told The Jerusalem Post before their 2009 maiden appearances in Israel at the Shoni Fortress in Binyamina and the Ra’anana Amphitheater.“But I think that the continuity is still there, even without Jeff or Bev. People are amazed at how close to the original sound on the records we manage to achieve.”Attendees of those shows can attest to the accuracy of Kaminsky’s claim, and a good part of the credit has to go to The Orchestra’s guitarist/keyboardist and singer Eric Troyer, who was a founding member of ELO II and has been playing the music of ELO for over 20 years.“The music of ELO is in the grand tradition of The Beatles, it’s got a lot of the same elements,” Troyer told the Post recently from his home in western New Jersey.“Jeff’s a great producer and excellent songwriter. His musical ideas are full of ear candy and contain lots of meticulous layers that still sound great today.”The 66-year-old Troyer, who was raised in a conservative Mennonite Christian family in Indiana, was exposed to music in church early on but had to arrive at rock ‘n’ roll in a clandestine manner.“Mennonites do a lot of singing, so my whole family was full of great singers who performed in church choirs which is where I began,” said Troyer. “Rock ‘n’ roll was frowned upon in that community, but after I heard The Beatles, I didn’t have much of a choice. My dad never completely accepted my decision to play secular music.”Troyer dropped out of college in the early 1970s and tried to break into the music business, first in California and then in New York, where he got by singing on TV and radio ad jingles. His distinctive voice led him to some high-profile studio sessions backing a range of artists from Lou Reed and Meatloaf to Billy Joel (“Uptown Girl”) and James Taylor.But the pinnacle might have been in 1980 when his producer friend Jack Douglas invited him to New York’s Record Plant to sing on John Lennon’s Double Fantasy.“Jack left a message on my phone – this was back before beepers and cell phones – and I didn’t get it until the next day. I rushed down to the studio just before they were recording ‘Woman’ and I sang on a whole bunch of tracks for it. It was a high point of my life,” he said.“The next day when I walked in, John said, ‘oh, hello Eric.’ And I thought, ‘my God, a Beatle knows my name.’ It was a kind of ‘pinch me’ moment.”The studio work continued regularly for the rest of the decade, especially with Meatloaf svengali Jim Steinman, whose string of hits featuring Troyer broadened to include big production hits like Tyler’s “Total Eclipse of the Heart” and Air Supply’s “Making Love Out of Nothing At All.” It was the Steinman connection that led him to ELO.“The guy managing Air Supply – Don Arden – was this legendary music entrepreneur who had managed the original ELO,” said Troyer. “By this time, they had been on a total hiatus for a long time. Jeff was never comfortable playing live and was much more a studio guy. But Bev wanted to continue performing, so he and Don were looking around for players to add to the core group. They asked Jim Steinman if he could recommend someone, and Jim mentioned my name.”ELO II was launched and the band’s metamorphosis into The Orchestra has withstood both Bevan’s retirement and the death of original bassist Groucutt of a heart attack in 2009. Troyer said that despite the band members’ advancing years and health problems of veteran keyboardist Lou Clark, there are no plans to put this version of the band to rest. Even if that’s what Jeff Lynne would like to see happen.“I think that Jeff has accepted that we’re out there playing ELO music, but he’s not really ok with it,” said Troyer. “He’s tried to stop us a number of times. For all his talent, he’s a bit of a curmudgeon I guess. ELO II was with his grudging permission, but at a certain point he convinced Bev to fold the whole thing up.This was around 2000 when he decided to release an ELO album. I guess his record company told him that the world didn’t need another Jeff Lynne album, but an ELO one, so they tried to tie things up and get us off the stage so there wouldn’t be any confusion.”However court rulings favored allowing the former members to continue performing as long as they didn’t use the ELO name and a clear distinction was made between ELO and The Orchestra.“We’re respectful of his position,” said Troyer. “I’m not sure if he likes the fact that we’re here, but we are keeping his music alive.”The Orchestra will be performing on July 28 and 29 at Hangar 11 in Tel Aviv, July 30 at the Tel Aviv Performing Arts Center and July 31 at the Congress Center in Haifa.