Shakespeare gets the Sephardic treatment 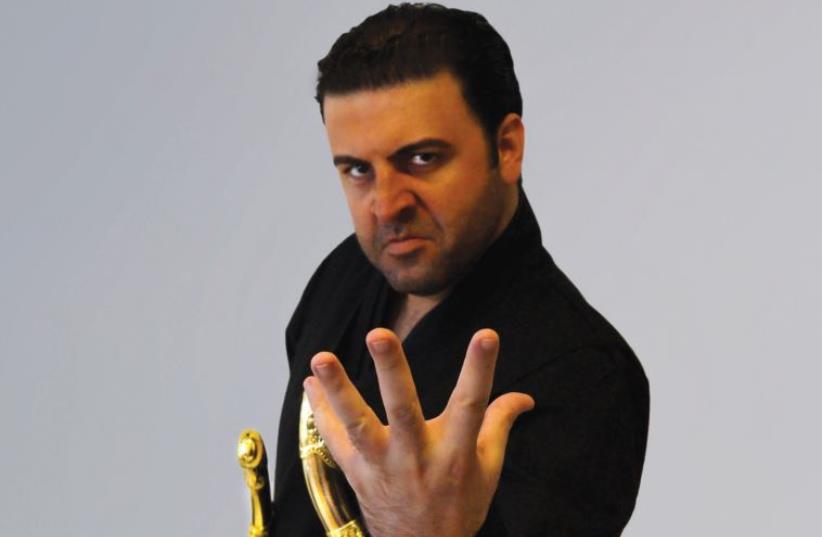 Opera singer and actor David Serero
(photo credit: Courtesy)
Advertisement
NEW YORK – When William Shakespeare wrote Othello in 1603, he probably didn’t intend for it to be performed with belly dancers, darbukas, Judeo-Arab music and Ashkenazi-Sephardi jokes on stage.But the idea is not completely farfetched.Many who have analyzed Shakespeare’s works have suggested that the author’s Moorish hero may have been inspired by Abd el-Ouahed ben Messaoud, the Moroccan ambassador to the court of Queen Elizabeth I in England in the early 1600s, who helped establish the Anglo-Moroccan alliance at the time.This connection is what led Frenchborn opera singer and actor David Serero to produce a Moroccan-Jewish adaptation of Othello, which played during June at the Center for Jewish History in Manhattan.“I have that chutzpah. I’m not afraid to change rules,” Serero, who plays the lead role of Othello in his production, told The Jerusalem Post.Being a Moroccan Jew always constituted an important part of Serero’s identity. Beyond the fact that his great grandfather was the chief rabbi of Fez in Morocco, Serero was raised in the tradition. As a child, his father used to play Jewish Arabic music in the car when they were driving together.One of these road songs, “Sidi H’bibi” by Salim Halali, made it into Serero’s Othello.“From the beginning, when I started opera singing, I wanted to express my culture in opera,” he told the Post, sitting in a pub in Manhattan, sipping a fizzy drink. “It was kind of difficult because you know, opera is very Catholic.”“In Paris or in Israel where the Jewish Moroccan culture is more present, I never dared to put this heritage into this work. I was afraid of the reaction,” he admitted. “But here, I’m far away from everything. Some people don’t even know where Morocco is, or that Morocco is a country.”It isn’t the first time Serero has added a Sephardi touch to his theatrical and operatic productions. Earlier this year he played several classics with the same twist, or as he likes to call it, “a touch of champagne,” including the role of Shylock in The Merchant of Venice.

“It may be a Moroccan thing but we are not afraid to try,” he said. “For me it’s already a miracle that I had access to opera and that I started to learn it or sing it.”The road to getting to perform in operatic productions, plays, movies and even television series was indeed not an easy one for Serero. When he expressed his desire to study the performing arts, his Jewish Moroccan parents and extended family were more than skeptical, especially as they had counted on him taking the reins of the family’s kosher catering business.“They told me, ‘You are a dreamer, you will never succeed, you are stupid, you are lazy,’ I’ve heard it all,” he recalled. “But that meant I had to work three times harder: one to do the job, second to prove to the world I could do it and third to prove to my parents I could do it and I wasn’t bad at it.”But Serero describes himself as the kind of person who “if the door is closed, goes through the window.”Today, after some 20 years of experience, Serero, who now lives in New York, doesn’t have to go through the window anymore. When he approached the American Sephardi Federation about putting together a Sephardic Othello, the idea was immediately welcomed.“I’ve always been a big fan of Shakespeare,” he said, “and Othello was always my favorite play. I don’t think there is an equivalent in the world of theater.”Othello has been described as perhaps William Shakespeare’s most romantic piece. The protagonist, a Moorish general, is manipulated by his ensign Iago, who convinces Othello that his wife Desdemona is unfaithful. Iago also turns Othello against his lieutenant Cassio, whom he portrays to him as Desdemona’s lover. Othello, tormented by Iago’s lies, kills his wife and himself at the end of the play.“A lot of people see him as a murderer but he is a character who is just crazy in love with his wife,” Serero told the Post. “Othello is a larger than life character. He is larger in everything: when he laughs, when he cries, even when he dies.”Beyond the music choices, darbuka sounds and expressions like L’chaim or Yalla, transposing this tragic love story into a Moroccan Jewish context also meant simplifying the language, and changing up small details of the play.The alcohol drunk by Othello’s soldiers in one of the first scenes, for example, is replaced by Moroccan tea, poured into traditional jewel-colored glasses from high above, and when Desdemona dies, Serero’s Othello sings the “Kaddish” above her lifeless body.“It’s making Shakespeare more accessible,” he said. “The great thing with classics, but especially with Shakespeare, is that you can do them in so many ways. To modernize something doesn’t mean to do it in jeans and sneakers, it’s about your approach to it.”After five performances of Othello at the Center for Jewish History, Serero is preparing for his next acts. Among them a Sephardic King Lear, a production of the French play Cyrano de Bergerac and even a modern version of Don Juan set in a nightclub.
Advertisement
Subscribe for our daily newsletter