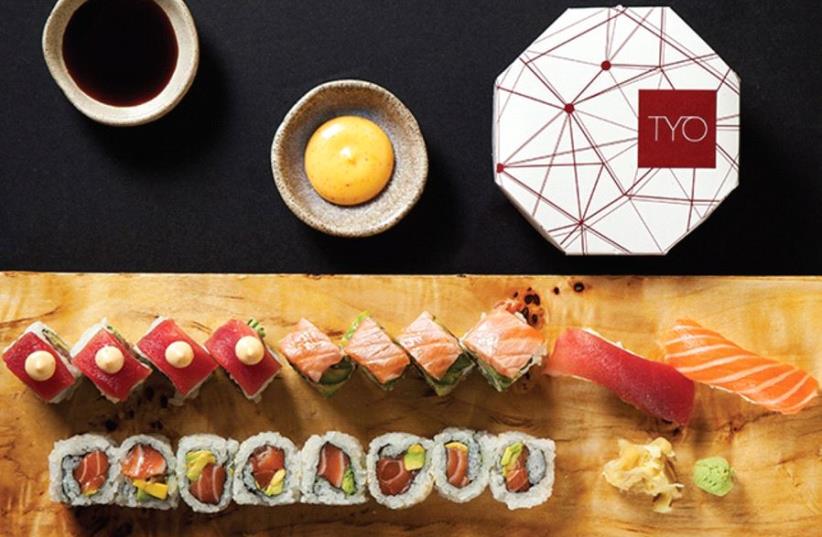 TYO restaurant
(photo credit: PR)
Advertisement
As I have written before, TYO is on my list of top Japanese restaurants in Tel Aviv. I have been there numerous times and can say that each time, I have left happy and satisfied. Now TYO is offering a special lunch menu every Saturday from noon to 4 p.m., where for NIS 90 one can choose a starter and a main course from a wide variety of dishes. We ventured out on a chilly Saturday afternoon to check out the options for ourselves.Before the array of appetizers appeared, we had two refreshing cocktails – the white sangria and Mediterranean. Both were delicious.We began our sampling with the salmon sashimi, which was some of the freshest I’ve had. The quality was exceptional. The salmon was tender and flavorful and required hardly any chewing.Next up was the seaweed salad, which was light and refreshing. The mix of seaweed, shiitake mushrooms, avocado and crisp cucumber in a miso vinaigrette was just right. The dressing was not overpowered with vinegar, while the seaweed was cut into thin shreds and not too chewy.This was followed by red tuna on crisp tortillas with seared garlic butter, cherry tomatoes, Parmesan and chili.Very simple in execution and bold in complementary flavors. The red tuna had a delicious kick to it, and the tortillas added just the right amount of crunch.We then tried the nasu miso, a classic Japanese dish consisting of grilled eggplant with a thick, tangy miso glaze, topped with crisp tempura-seared vegetables. The almost meaty texture and subtle savory flavor of the eggplant, combined with the stickiness of the miso glaze, brought smiles to our faces.Then we sampled the choice of main dishes. First we were presented with the chicken katsu curry. The katsu was thinly breaded, juicy and crisp without feeling greasy, and the curry sauce was thick and savory with hints of sweetness, with carrots and potatoes mixed in as is typical of Japanese style curry plates. The dish came with a large side of rice.Next up was the miso-glazed black cod, which was rich and savory. The fish was perfectly cooked with crisp, slightly burnt outer edges and juicy melt-in-your-mouth flesh underneath.It came with tasty mushrooms, green asparagus and crunchy rice fingers.Everything in the dish was delectable.Last, we were served beef bibimbap in a stone pot. It was delivered sizzling hot, with the finishing touches prepared at the table. Like the nasu miso, this dish came with a variety of crisp tempuraseared vegetables alongside the sweet marinated beef. I loved every bite of it. The stone pot really made the dish because a bit of the rice gets crunchy toward the bottom, adding to the unique texture and flavor.The desserts, too, were delightful.We tried the cheesecake, which had a lot of lovely textures and the right level of sweetness. This was followed by the devilishly decadent chocolate Eclipse cake.With so many flavorful dishes to choose from on the menu, the NIS 90 Saturday lunch special will present diners with a real challenge of choosing just one from column A and one from column B, so to speak.But what all the dishes have in common is a consistent focus on fresh, wholesome flavors and ingredients, as well as subtle, artistic presentation.The writer was a guest of the restaurant.