Taking kitchen games on the road

Hit show ‘Games of Chefs’ is back, with a twist – food trucks and celebrity guests 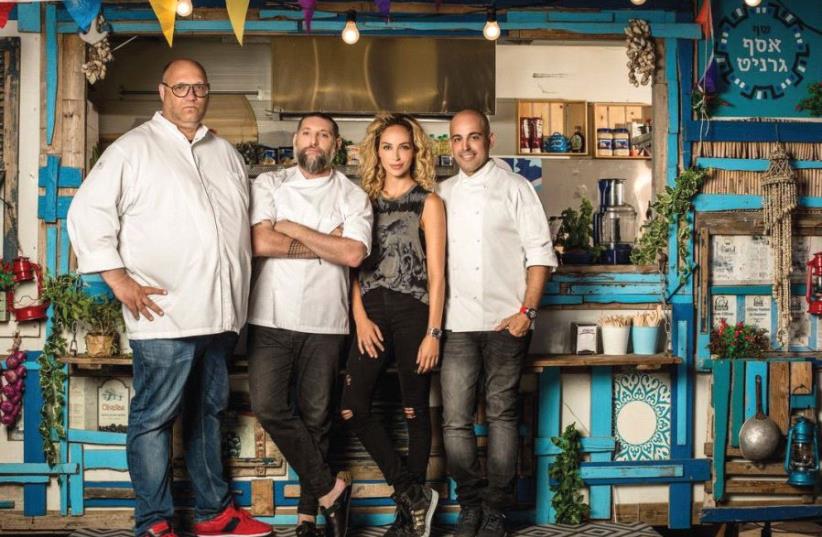 MOSHIK ROTH, Assaf Granit, Miri Bohadana and Meir Adoni are all back for ‘Games of Chefs: Food Truck.’
(photo credit: CHAD ROMANO)
Advertisement
The popular culinary competition show Games of Chefs is back – sort of.A kind of stepsister to the highly- rated food program, titled Game of Chefs: Food Truck, launched last week on Channel 2’s Reshet. But aside from the four main characters, the new show bears little resemblance to the original program, which saw each of the famed chefs heading a culinary team as they were eliminated one by one.Instead, this version pits the three culinary stars – Moshik Roth, the Michelin- starred chef who owns a restaurant in Amsterdam; Assaf Granit, the man behind Jerusalem’s Machneyuda and London’s Palomar; and Meir Adoni, owner of Tel Aviv’s Lumina and Blue Sky and in the midst of opening Nur in New York – against just each other. Well not just against each other: in every episode each chef is paired with a “celebrity” partner to help them gather ingredients and cook for 50-60 locals who then vote on their favorite dish.In each episode, the chefs and their trucks arrive in a different city around Israel, where they visit a market, chat with locals to gain inspiration and then get in the tiny kitchen to cook up a storm.The first episode saw the threesome land in Acre, where they all – not surprisingly – chose to make fish dishes. Granit’s sous chef was none other than musician Mosh Ben-Ari, Roth was paired with singer Avraham Tal and Adoni with actor and TV presenter Guy Zuaretz.There’s a lot to unpack in the 90-minute show, from the good to the bad to the super kitschy.Let’s start with the good: I love the idea of showcasing a different Israeli city each week, and visiting places where many don’t normally go. The first episode spotlights Acre, the next will be in Dimona and future episodes will be set in even lesser-known places, like the Avtalion moshav. The show also gives great prominence to each locale, with beautiful vistas, a focus on regional food and local color. Perhaps the most dynamic moment of the first episode was one of the pairs ending up in an Arab grandmother’s apartment in Acre learning a new dish firsthand.The three chefs are, as always, at the top of their game and make for great TV.While the competitiveness and trash talk are entertaining, there is also a sense of brotherhood among the three. At one point when Roth seems to be losing his way, Granit hops over, leaving his own dish mid-cooking to offer advice.“I’ve never helped anyone the way I have today,” he said afterward. “I’m not sure what’s wrong with me. I think I’m sick.”Though rumors say Granit and Adoni have clashed on set, that energy doesn’t come through on screen.The downsides? To start with, I couldn’t care less who wins. When it comes to the original Games of Chefs – and other similar shows – viewers become invested in the competitors and root for one to win it all. But I can’t muster the energy to rally behind one of the three rich, successful TV stars competing here. It’s the same problem I had with Eyal Shani and Yonatan Roshfeld’s Battle of the Chefs last year.The show also definitely brings the cheese factor – as well as a slightly patronizing attitude to “real Israelis”; as the tasters begin to arrive, Adoni exclaims: “Now I’m in a place where I can really reach out and touch the Israeli people.” After Tal and a local resident discuss coexistence and the potential of peace, Ben-Ari’s song “Salam: Od Yavo Shalom Aleinu” (peace will come upon us) plays loudly in the background.But what really irks me about the show? You probably guessed it: the completely superfluous addition of the so-called celebrities to the mix. Sure, Ben-Ari is a bonafide star, and Tal is certainly a well-known name in Israel; Zuaretz somewhat less so. But they don’t contribute all that much to the proceedings, and feel like too desperate a ratings grab to be taken seriously. We’ve seen celebrities who know how to cook on MasterChef VIP and those who don’t know how to cook on Help! I Don’t Know How to Cook. And now? We get celebrities who sort of know how to cook, or at least to chop things and be ordered around.But perhaps the most grating part of Games of Chefs: Food Truck is how, even without the celebrities and cameras, the premise is still completely unbelievable.Despite the fact that food trucks have conquered the American culinary landscape, they’re pretty much nonexistent in Israel.The dream of a mobile pop-up restaurant that can stop by your neighborhood and serve up fresh food is not a reality here, due mostly to – you guessed it – bureaucracy.Health Ministry regulations have nixed just about all attempts at food trucks in the country. And while Jerusalem last month announced it would launch a fleet of five to seven trucks around the city, those are still a while away, and would also each be linked to a local restaurant as opposed to being independent ventures.Will this show finally be the force needed to bring food trucks to Israel? Or will it remain a venture reserved only for famous chefs and their celebrity sidekicks? Let’s keep on trucking to Dimona and find out.Games of Chefs: Food Truck airs on Channel 2 Thursdays at 9 p.m., or full episodes can be seen at mako.co.il.