In celebration of the American Independence Day, a group of teenagers in Tel Aviv will be presenting the popular musical Hamilton about the US presidents over the weekend. 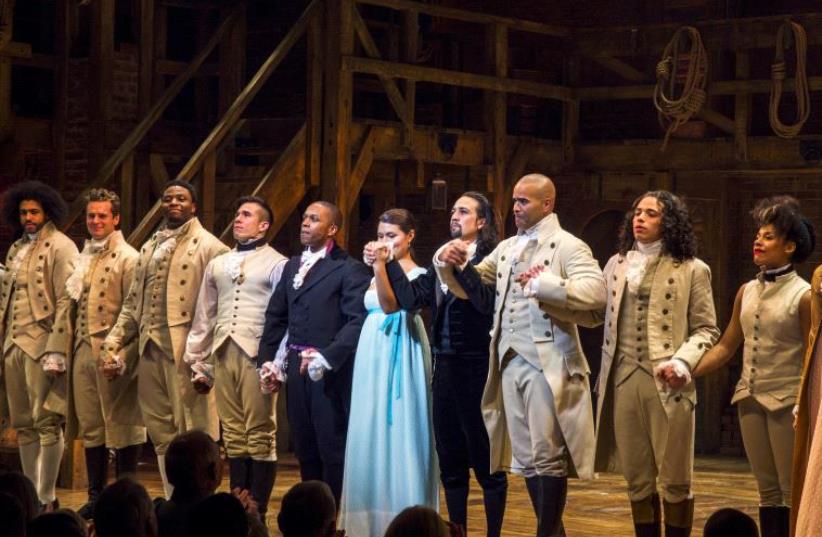 The play "Hamilton," bows to the audience after opening night of the play on Broadway in New York August 6, 2015
(photo credit: REUTERS)
Advertisement
Many Israelis love the US, but a few have decided to take this connection to Uncle Sam one step further. A group of Israeli teenagers between the ages of 12 and 18 decided to stage a production of the popular musical, Hamilton, on their own without any outside funding. They accomplished this feat in a very original and amusing fashion.The musical premiered yesterday (Wednesday) at the Park Theater at Ganey Yehoshua, and additional performances will be staged tonight and Saturday night. The 27 teens who were involved in the endeavor paid out of pocket (about NIS 150 each, for a total of NIS 5,000) and preparation for the play lasted months.The executive producers, Alma Orliansky, Zohar Berlal and Yonatan Avidor, had planned to stage only one performance, but after all the tickets sold out within a week, they decided to add additional performances for those who hadn't managed to get hold of tickets by July 4.Avidor, who hails from Herzliya, and plays the US's fourth president in the show, said that, "We're for sure going to lose money, but we don't care. Our parents taught us that the joy we receive from putting on the play is more important than making money from it."Berlal, who hails from Pardes Chana, is well aware of the image they have as teenagers who are history buffs. "Yes, we admit that we are nerds. Mega nerds.""We don't care so much about image," says Avidor. "We just want to do what we love, and two of the things we love the most are theater and history."Is there a big demand for these types of productions?"People love going to see musicals such as Les Miserables and Annie," says Berlal. "Historical musicals are less popular, but Hamilton is truly transformative and some parts even include rap."Was it difficult to put on this performance?"It was costly, and it wasn't always easy going, but in the end we were successful. It required a lot of faith, effort and an exorbitant number of quill pens. And now we are singing and dancing and making historical declarations about American history even in our sleep."