The Budapest Operetta Theater presents its production of ‘Countess Maritza.’ 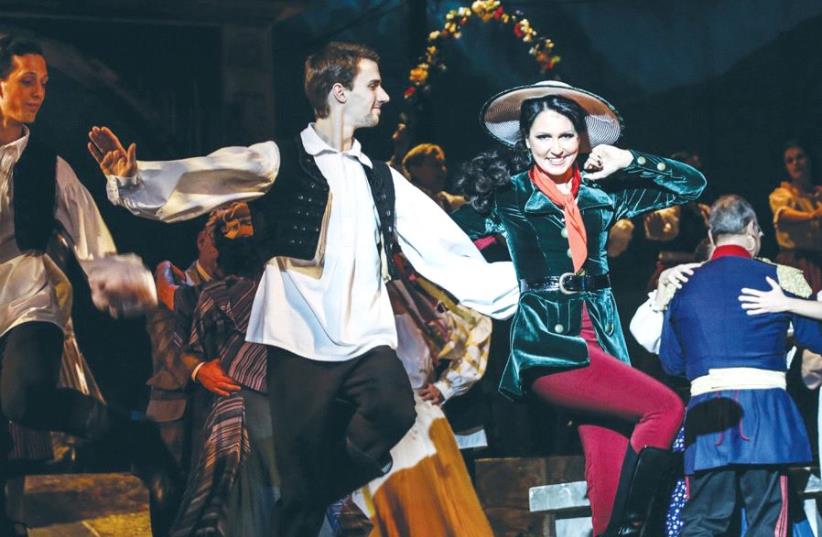 The Budapest Operetta Theater
(photo credit: COURTESY OF THE BUDAPEST OPERETTA THEATER)
Advertisement
If you ask the Hungarians, Bob Fosse’s renowned film Cabaret could just as well have taken place in Budapest in the 1930s. On a recent press tour to the Hungarian capital, the guide in a museum dedicated to the cabarets of that era explained to our group that “Hungarians love night clubs, and our night clubs presented similar shows long after the Berlin clubs had to close.”Indeed, to this day Budapest boasts rich night life, and today’s equivalent, the “ruined night clubs,” which are discotheques and bars located in semi-ruined buildings, are attracting many tourists and locals.The style of the pre-war clubs is mirrored in the operetta Countess Maritza by Hungarian composer Emmerich Kalman.About halfway into the operetta, there is a play within a play when the countess’s guests stage a variety-cabaret show at a party held at the estate. The operetta’s director, Miklos Gabor Kerenyi (aka KERO), used this opportunity to present a fast-paced extravaganza of burlesque, Can-Can and jazz dances, as well as Hungarian folk dance, much like they did in the 1930s.Countess Maritza will be performed at the Opera House in Tel Aviv (June 15 to 24) when the Budapest Operetta Theater returns for its annual visit.It is as colorful and exuberant as operetta can be, with successions of lovely melodies followed by romantic scenes, catchy tunes, hilarious scenes and energetic dances, deftly executed by a group of very talented performers.The Jewish Hungarian composer Imre (Emmerich) Kalman (1882- 1953) was one of the most successful operetta composers of his time, and Countess Maritza became a worldwide hit following its premiere in Vienna in 1924. It is a tale of love, pride and social prejudice, adorned with a lot of glitter and csardas.Maritza, a wealthy and beautiful countess, is tired of the endless stream of suiters who she is convinced are only after her money. She decides to retire to her country estate and, upon her arrival, announces her engagement to a fictitious Baron Koloman Zsupán (the name of a character in one of Johann Strauss’s operettas).Waiting at the estate is the gallant Count Taszilo, who works there as the farm manager under an assumed name. Taszilo has undertaken the job in order to settle his father’s debts and support his younger sister Lisa. To Maritza’s surprise, Baron Koloman Zsupán appears at the estate, claiming his fiancée. He is, we learn, Taszilo’s childhood friend Baron Istvan Liebenberg. To complicate matters further, the countess invites a young friend to the estate, who turns out to be Taszilo’s sister Lisa.Adding to this already impossible situation are two colorful characters – the elderly Prince Dragomir, a retired army officer who has been in love with Maritza for years and provides many comic moments; and a gypsy fortune teller who predicts, to Maritza’s dismay, that she will find new love.The expected ensues: Lisa falls in love with Liebenberg, who together with the prince, pursues Maritza. Maritza and Taszilo fall in love with each other in spite of themselves. It all works out in the end thanks to Taszilo’s elderly rich aunt who comes for a visit.The operetta showcases Kalman’s mastery of the operetta style. The music is orchestrated in a style that is in some places reminiscent of the early film musicals, and some of the melodies have a gypsy lilt. To the delight of the Hungarian crowds, several tunes are in the csardas form, but there is a Charleston and other styles as well.KERO is also the artistic director of the theater, which presents a rich program of operettas every evening year round.“We are all a family here,” he declared at a press conference following the show. Indeed, he means it in more ways than one. His son, the versatile, funny and accomplished actor-singer-dancer Miklos Mate Kerenyi, is wonderful in the role of Istvan Liebenberg; and Karo’s wife, Tünde Frankó, an accomplished opera singer, plays the role of Manja, the gypsy fortune teller, who steals the show whenever she is on stage. But it doesn’t end there. His daughter-in-law was in the production but is now on maternity leave. Her replacement, a young singer named Aisha Kardffy, was captivating with fresh energy and a lovely personality. She divulged that she had barely finished her studies at the operetta’s school when she was asked to step into the role of Lisa, and she attested that indeed the company is run like a family.“Everyone supported me and made me feel at home when I joined the production,” she continued, declaring that as a member of “the younger generation,” she felt that operetta was as relevant to her friends as it was to the older generations in Hungary and abroad.Kerenyi said he found operetta to be often misunderstood, where some dismiss it as an outdated art form.“The operetta speaks to the heart and should be accessible to everyone. It is part of our Hungarian identity and culture, but our performances are also received very well by audiences around the world,” he said with pride. “I try to incorporate a lot of movement and many surprises in order to keep the audiences interested, especially the young ones.”The Budapest Operetta Theater presents ‘Countess Maritza’ on June 15 to 24 at the Opera House in Tel Aviv. For more information, go to www.israel-opera.co.il