Empowering women across the country is the main goal of the women of Lion of Judah Israel, who present a new model of philanthropy based on mutual sharing.

By TALI HERDEVALL
NOVEMBER 27, 2014 13:35
At Home Together: Empowering women in Karmiel, a Jewish Agency Project. This project brings together 40 new immigrant and veteran Israeli women to form a close-knit group that meets once a week.
(photo credit: Courtesy)
Advertisement
Giving, doing and sharing are at the core of the socially committed women’s organization Lion of Judah Israel (LOJI), or Arie Yehuda in Hebrew, a new concept in women’s philanthropy. The fund is dedicated to the advancement and empowerment of women and girls in Israeli society, mainly funded by contributions by the members. LOJI is the Israeli branch of the international organization Lion of Judah, which has more than 18,000 members.Established in Israel 18 years ago, LOJI has been picking up steam lately. I met with six of these extremely active women at the home of Sigal Bar-On in Ramat Hasharon.She is the co-chair of Fischer Pharmaceutical (Dr. Fischer). Besides her busy schedule, raising four children and sitting on the board of the Fair Chance for Children foundation, she finds time to be the vice chair of LOJI.Doris Weiser-Small is the founder of the Israeli branch (together with Faigie Zimmerman). She helped establish the Israeli branch after being active in the organization in Montreal. She has lived in Israel for 20 years, and since the time she arrived she convinced women to contribute to LOJI.Ruthie Oren is the chair of LOJI. Dr. Talma Cohen, head of LOJI’s project committee, is a psychologist. Denise Bar-Aharon, who has been active in LOJI for the past four years, is the co-founder and CEO of Make-A-Wish Israel.And Nurit Avner, head of LOJI’s new members committee, is a council member of the Ramat Hashron Municipality.How did LOJI get started here?
Weiser-Small: Lion of Judah started in Miami. Today, there are thousands of Lion of Judah branches around the world. When I moved to Israel, I was asked to arrange a conference for LOJ, which came for a visit from abroad. I gathered 10 women. We started slowly and managed to become one of the goals of The Spirit of Israel organization and The Jewish Agency. This is true until today. At first I was surprised by the great need here. Today, I realize that one in three children in Israel suffers from hunger.Why does one have to pay an annual fee of NIS 6,000 to be a member and volunteer?
Oren: There are 30,000 foundations in Israel, but in LOJI there is only one woman who is paid, Rotem Weiner-Shapira, the coordinator; the rest of us are volunteers. The NIS 6,000 is the minimum fee; many members donate a lot more. It is less than in other countries. We decided on a lower fee because we want to include the middle class. We want to enable everyone to contribute.Bar-On: There is an annual donation, it is not a fee. In that way, you’re immediately contributing to our projects.It immediately makes you a philanthropist.Cohen: Philanthropy has changed in the US. People don’t just donate, they want to be involved. They ask questions and look for corporations.Oren: At the US Congress in September, we raised $27,000,000. When you raise so much money together, you can make an impact.Who can be a member of LOJI?
Bar-On: Any woman who wants to contribute can be a member of LOJI. We take great responsibility for all members and take it seriously. We have women from all over Israel, religious and secular. I got here through my friend Nurit, who told me to come and see what it was about. 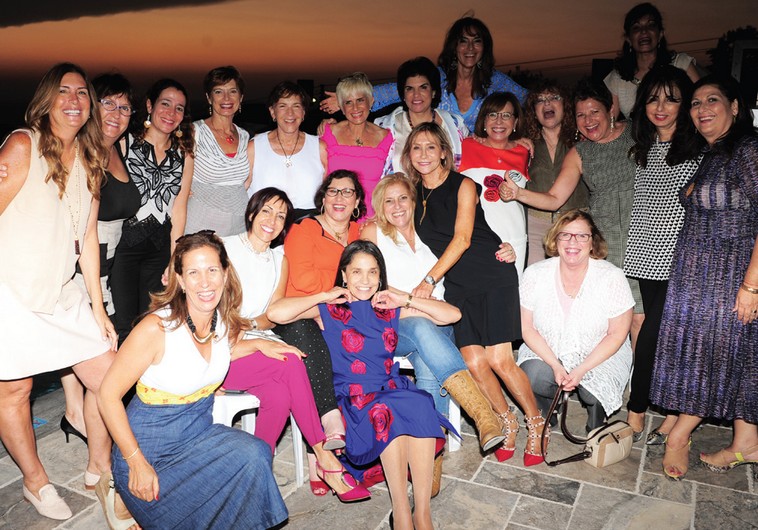 What differentiates you from other foundations?
Bar-On: What is unique about this organization is that it is a group of women who meet for the goal of social responsibility. We have a common link. This is our goal, and it empowers us personally as well. The networking leads to many things besides the social aspect.In the business world I meet many kinds of people, but here we have no competition. It is addictive, and it is very positive. It’s about cooperation and good energy.Bar-Aharon: It’s a great place to give and also to receive.We feel so connected, that we can be friends with one another. The women in this group feel like part of a community. We are involved with all the projects, and most of us visit the projects and help.Avner: We select our projects, which are all intended to empower women in the areas of education, economics or politics. It makes it all the more meaningful, since we decide where our money will go, and it involves taking action. Our committees are open to all our 120 members.I feel like LOJI is a kind of home. Every two years there is a conference in the US. In September, we attended the conference in New York and sat among 1,400 other Jewish women from all over the world. I felt proud of being Jewish and Israeli. The women sang ‘Hatikva’ with us, and it was all very emotional.Weiser-Small: I would like to elaborate on the sense of friendship. The women here are exposed to what I was exposed to in the past. The interpersonal relationships are important and meaningful.Cohen: There is trust. We’re like a community, and we’re connected by something that can help in finding genuine solutions.What are some of your projects?
Cohen: Since there are thousands of foundations in Israel, we decided to focus on specific subjects. Among them are supporting the periphery and girls in distress. Some of the projects are done together with the Jewish Agency.Bar-Aharon: This year, we’re going to adopt two wishes from the Make-A-Wish Foundation and fulfill them for two children suffering from life-threatening illnesses. One of them will be the launch of a book written by a girl named Ofir, who will sign the copies at an event that we will create.It’s the empowerment of a girl with a dream.Bar-On: At the Herzog nursing hospital in Jerusalem, we supported a course for nursing assistants. The students were women from Ethiopia, most whom had worked as cleaning women. After the course, the majority of them found work in their new profession. One of them told me how her self-esteem had improved in herself and in her children’s eyes. This allows them to integrate into society and adds values and social benefits.Avner: We contributed to a center for new immigrants in Karmiel. Most of the women came from Russia and didn’t speak any Hebrew. A flower-arranging course was given, which included Hebrew lessons. Through it, they learned Hebrew, got involved in society and made new friends. In such a project, we see how meaningful we become.Weiser-Small: One of the things we do is find partners.We arranged a course designed to empower women with leadership potential, whom we contacted at community centers around Israel.Bar-On: In the past year, our main theme has been economic empowerment. This is to help women to stand up for themselves and support their family. We help women get involved in the community so they will also be able to contribute.What are your future goals?
Oren: I would like us to keep emphasizing projects that are needed. I think it’s important to stay connected with the younger generation.Bar-On: We would also like to have new members, more women who want to be philanthropic.Cohen: Maintaining friendship is important. Besides getting more recognition, we want the establishment to see us as partners. We are a foundation that can make a difference.Oren: The core of the foundation is to give. We live by that.We make it a point that any event we do, does something special. We want to see things when they happen.
Advertisement
Subscribe for our daily newsletter