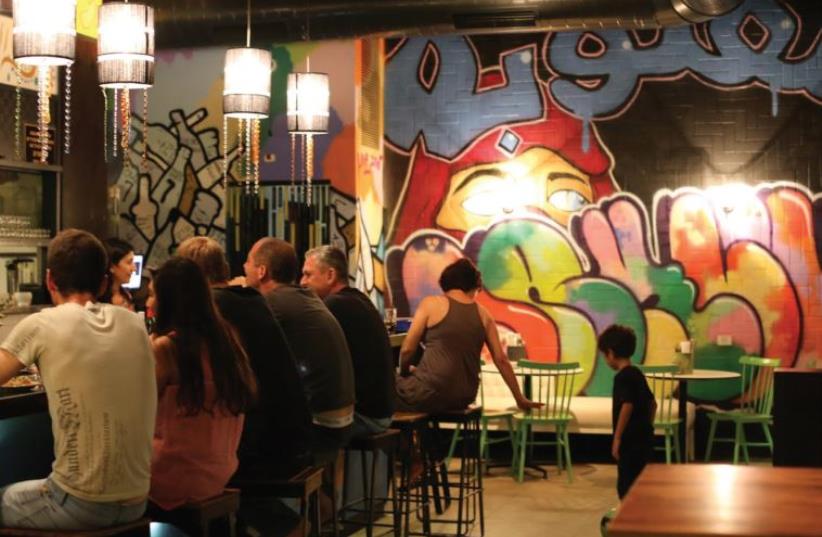 Maklubar restaurant
(photo credit: PR)
Advertisement
It was a lovely Thursday night, and I had to find the perfect place to take a friend who had arrived from London with great expectations. I wanted her to experience Tel Aviv’s nightlife, but she wanted have a taste of the famous “great food places.” Where could one find good local food that would also stand up to the London places she was used to? The pressure was on. Someone suggested Nir Tzuk’s restaurant, Maklubar, which just opened and served authentic Arab comfort food with a modern twist. That was it – an Israeli chef serving Arab cuisine in the heart of Tel Aviv. I quickly made a reservation.Maklubar is celebrity chef Nir Tzuk’s newest addition to the Tel Aviv food scene. The restaurant aims to bring everything that we like about Arabic food with a modern chef’s restaurant twist, which Tzuk adds by creating his own versions of the traditional classics.Tzuk says that Arabic food makes him happy. He took his time building the menu for his new place, talking to colleagues and Arab food experts before settling on his final version of the menu.As we stepped into the restaurant, we were greeted by the boisterous Bar, the head bartender and fun coordinator, who led us to our seats and immediately asked for our drink orders. Quick to build a rapport, he went on to prepare our custom cocktails to whet our appetites before the entrees arrived (quickly).His enthusiasm was matched by the khafla atmosphere of the place; all upbeat Arab beats and colorful decor, which encourage rapturous chair dancing once the cocktails kick in.We started our meal with a classic Arabic mezze of hummus (NIS 15/25), accompanied by spicy aubergine (NIS 22), warm stuffed vine and cabbage leaves (NIS 30 for eight pieces), tahini (NIS 18) and matbucha (NIS 18), served with freshly baked pita with za’atar (NIS 15). The highlight of the starters was the spicy matbucha salad with a twist: The vegetables and spices were oven roasted before being cooked, which gave them the zest and richness of intense flavors.The meal continued with a flavorful maluchiya soup (NIS 24), made of maluchia – a wild salty herb and a mix of herbs – which had an interesting taste and texture.The soup was followed by cigars filled with feta cheese and za’atar, and beef and herbs (NIS 25).Tzuk added two off-the-menu salads as well. One was an onion salad with a seasoning mixture and sesame seeds; the other was a salad of radishes in Campari and lemon.Another off-the-menu delight was the grilled dates stuffed with veal. It was a delicious balance of sweet and savory that kept us wanting more.Finally it was time for the dish that gives the restaurant its name – the makluba. This is traditionally made with lamb, but as we were planning to go clubbing later, we decided to go for the vegetarian makluba (NIS 48). A modern twist on the classic dish, it is a must-have for both makluba veterans and first-timers.After another round of delicious cocktails, we set off on the sweet adventure of the desserts. There we definitely bit off more than we could chew, having the unique version of malabi made of nougat with black coffee syrup and coconut (NIS 34) and the sinful katayef – one filled with sweet cheese and one with chocolate and nuts (NIS 30).Tzuk has succeeded once again in creating an inviting authentic Tel Aviv-Jaffa ambience, ideal for foodies who appreciate dining in surroundings tailored around entertaining.Happy and stuffed like delicious vine leaves, we stepped outside into the Tel Aviv night air, moving to the beat and tipsy from the cocktails.The writer was a guest of the restaurant.