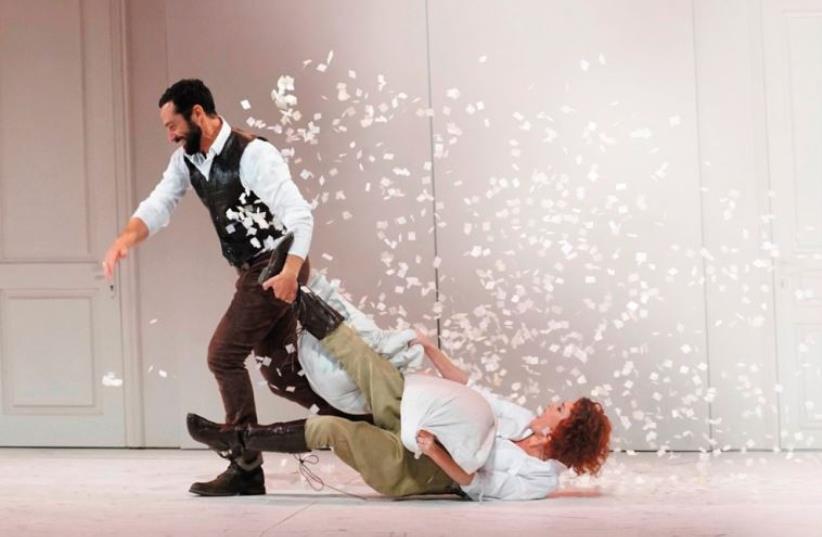 'The Taming of the Shrew' comedy at Beit Lessin Theater
(photo credit: GADI DAGON)
Advertisement
1. FILM: BUBBLE BOYS In the drama The Big Short, four denizens of the world of high finance predict the credit and real-estate bubble collapse of the mid-2000s in the US and decide to tackle the big banks head-on for their greed and lack of foresight.With Brad Pitt, Christian Bale, Steve Carell, Ryan Gosling.2. DANCE: FAST ON HER FEET Ulyana Lopatkina is the renowned prima ballerina of the Mariinsky Theater in St.Petersburg. She will be appearing in Israel for three performances with soloists from the Mariinsky Ballet and leading Russian ballet companies. The evening will include the pas de deux from Tchaikovsky’s Sleeping Beauty; Mahler’s Death of the Rose; and Strauss’s Viennese Waltz. Lopatkina will also perform a solo of her own creation, danced to music by Tchaikovsky.Tonight at the Opera House in Tel Aviv; (www.israel-opera.co.il); Friday at the Beersheba Performing Arts Center (www.mishkan7.co.il); Saturday at the Haifa Convention Center on (www.icchaifa.co.il).3. DANCE: MAKING HIS MARK The Mark Morris Dance Group will present six performances of Morris’s works, all set to classical music. These include Grand Duo (1993); Visitation (2009); V (2001), set to Schumann’s Quintet in E flat major for Piano and Strings; and Eleven and Double from Morris’s acclaimed Mozart Dances.Tuesday through next Saturday, Opera House, Tel Aviv. Tickets and info: www.israel-opera.co.il or *6226 4. DANCE: HEARING THE BEAT NABA 2.0 by choreographer Dana Ruttenberg is performed in a museum gallery with the use of audio guides. Each viewer receives an audio guide and headphones, loaded with numbered audio tracks. According to instructions given on stage (via specially designed signs), the audience can choose a track for every “chapter” of the piece.Saturday, 11 a.m., Ashdod Museum of Art – Monart Center, NIS 50. Info: www.ashdodartmuseum.org.il 5. MUSIC: HITTING THE GUITAR BEAT Adrian Belew is an American guitarist, singer, songwriter, multi-instrumentalist and record producer who fronted the prog rock group King Crimson from 1981 to 2009. In his 40-year career, he’s worked with rock icons such as Frank Zappa, David Bowie and Talking Heads. Catch the Adrian Belew Power Trio in Tel Aviv.Wednesday, 8:30 p.m. at the Barby Club, Tel Aviv. Tickets and info: www.barby.co.il 6. FESTIVAL: SPRING IN THE DESERTThe Darom Adom (Red South) festival is the northern Negev’s annual celebration of blossoming anemones, culinary attractions and recreation for the whole family.The festival, which is held over four weekends, includes concerts by Danny Sanderson and Gidi Gov, Alma Zohar and A-Wa, as well as a choice of walks through the stunning fields of anemones at the Nature Park at Kibbutz Ruhama. There is also a mountain biking marathon at Kibbutz Be’eri.Today through February 18. Info: www.habsor.co.il 7. MIXED BAG: FURRY FRIENDS SPCA Israel invites the public to Furry Wednesdays, a series of meetings in the field of animal welfare. The series comprises lectures on the topics of education and training, nutrition, behavior, communications, grooming and hygiene. The series is intended for cat and dog owners, those considering adopting a pet and those who want to extend their knowledge about and connection with animals. This Wednesday, Na’ama Rolnik, dog trainer and SPCA adoption adviser, will give a lecture on integrating a new dog into the home, with emphasis on house training puppies.Entrance is free.Every Wednesday in February at 7 p.m., SPCA Israel, 159 Herzl Street, Tel Aviv. Info: www.spcaisrael.org.8. ART: SELFIE-PORTRAIT The new exhibition “Prima Facie” at Tel Aviv University surveys the changing face of portraiture from the beginning of the last century through paintings, drawings, sculptures, installations and video works by leading international and Israeli artists.Ongoing at the Genia Schreiber University Art Gallery, 54 Haim Levanon Street, Ramat Aviv. Info: https://en-art.tau.ac.il 9. THEATER: TAMING THE TONGUE Beit Lessin Theater presents Shakespeare’s most outrageous comedy, The Taming of the Shrew. With Agam Rodberg as the desirable Bianca; Maya Dagan as the shrewish Katherine; and Yuval Segal as the strong-willed, gold-digging Petruchio. In Hebrew. Directed by Udi Ben-Moshe.Monday and Tuesday, 8:30 p.m., Beit Lessin, Tel Aviv. Info and tickets: www.lessin.co.il 10. UPCOMING MUSIC: BIG IN TEL AVIV Popular 1980s German band Alphaville will perform two concerts next week as part of its European tour. Originally known as Forever Young, the band took the name Alphaville from the acclaimed 1965 film by Jean-Luc Godard.In 1983, Alphaville landed an international record deal with WEA, and the following year they released its debut single, “Big in Japan.” The song soon became a worldwide hit. Alphaville has sold more than six million albums.Some of the band’s other big hits include “Forever Young,” “Sounds Like a Melody” and “Dance with Me.”February 5 and 6 at 9 p.m., Charles Bronfman Auditorium, Tel Aviv. Tickets: www.eventim.co.il