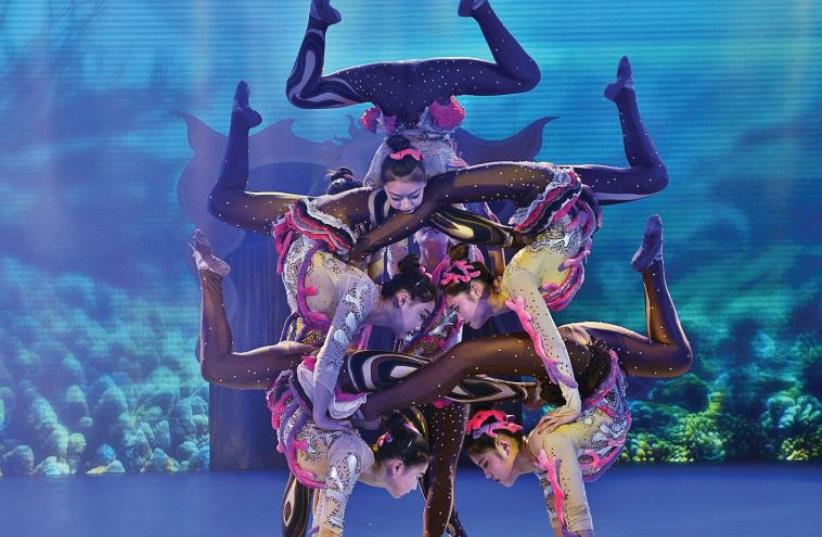 The Shanghai Circus.
(photo credit: Courtesy)
Advertisement
1. FILM: THE END IS NIGHThe post-apocalypse thriller 10 Cloverfield Lane is about a woman who wakes up in a bunker with two men, one of whom claims to have saved her from a widespread chemical attack. With John Goodman, Mary Elizabeth Winstead, John Gallagher Jr.2. ART: KEEPING IT FRESHFor the past eight years, the annual Tel Aviv-based Fresh Paint fair has been setting the tone for the upcoming year of Israeli contemporary art and design.This year’s fair is the perfect opportunity for galleries, art lovers and collectors to attend activities such as workshops, master classes, video art screenings and the unique Greenhouse, showcasing the works of selected independent Israeli artists.Tuesday through April 9 at the Tel Aviv Port. Info: http://freshpaint.co.il 3. MUSIC: OUD ADVICE American-born Armenian oud player and composer Ara Dinkjian is the founder of the groundbreaking instrumental group Night Ark. He is considered one of the world’s top oud players, and his compositions have been recorded in 13 languages. In concert, Dinkjian will be joined by local musicians such as Zohar Fresco and Gilad Efrat.Friday, 10 p.m. and Saturday, 9 p.m., Elma Hall, Elma Arts Complex Luxury Hotel, Zichron Ya’acov. Tickets: www.elmahotel.co.il; (04) 630-0123 4. MUSIC: SHADES OF MOROCCOIsraeli-Moroccan singer Neta Elkayam and her ensemble will perform a concert titled Howa Jani (Here, he comes to me), based on new arrangements to songs of Maghreb Jewry, taken from archival recordings and old records, alongside original material by members of the ensemble.Tonight (Thursday), 8:30 p.m., Confederation House, Jerusalem. Tickets: www.confederationhouse.org;*6226 5. FESTIVAL: CALLING ALL MUSIC LOVERS This year’s Felicja Blumental International Festival focuses mainly on Spanish and Spanish-influenced music from the Baroque period to today. It features chamber concerts, flamenco, lectures and films. Among the international participants are the Ludovice Baroque music ensemble from Portugal and the Koelner Academy Orchestra from Germany. Some of the local artists include pianist Alon Petrilin (pictured) and The Orchestra with Shlomo Gronich.Monday through April 9, Tel Aviv Museum of Art. Tickets and info: http:// en.blumentalfestival.com6. FESTIVAL: THE REEL DEAL FROM AUSTRIA Israel’s first Austrian Film Week takes place at cinematheques throughout the country. The films range from comedies and documentaries to Austria’s entry (Goodnight Mommy) for Best Foreign Language Film at this year’s Academy Awards. The opening film at the Tel Aviv cinematheque is Cracks in Concrete, a drama centered on two men at different stages of life. The film’s director Umat Dag will discuss the film after the screening.Saturday through April 13.7. EXHIBITIONS: THE BEAUTY OF ITALIAN JUDAICAA new exhibition at Beit Hatfutsot highlights the golden age of Judaica in Italy.Most of the 40 objects on display date from the Renaissance of the 15th century to the 19th-century Italian National Revival. Highlights include an ark cover designed by Emanuele Luzzati and Shabbat candlesticks by Luigi Del Monte.Until February 2017. Info: www.bh.org.il 8. CHILDREN: UNDER THE BIG TOPThe Shanghai Circus, with its internationally renowned troupe of more than 40 acrobats, aerialists and athletes, is bringing the Orient to Israel. More than 2,000 years of Chinese circus traditions are brought to life by intrepid performers with boundless energy.Through April 9 in Haifa; April 15 to May 15 in Tel Aviv; May 20 to June 4 in Beersheba. Tickets and info: http://shanghai.co.il 9. THEATER: ACTING UP A STORM The American Drama Group/TNT Theatre Britain returns to Israel, this time performing Shakespeare’s last play, The Tempest, written in 1611. See what happens when Prospero, the deposed duke of Milan, plots revenge against his foes on a remote island. Directed by Paul Stebbings; musical score by John Kenny.Sunday through April 7 throughout the country. Tickets and info: http://adgisrael.co.il 10. UPCOMING MUSIC: I AM DAVIDJewish British R&B star Craig David will perform an intimate concert as part of his new concept of intimate parties/gigs, known as TS5. David rose to the forefront of the global music scene in 2000 with breakout hits such as “Walking Away,” “Rise and Fall” and “What’s Your Flava.”He has been nominated for 12 Brit Awards and two Grammys.April 10, 8:30 p.m., Hangar 11, Tel Aviv. Tickets: www.hangar11.co.il