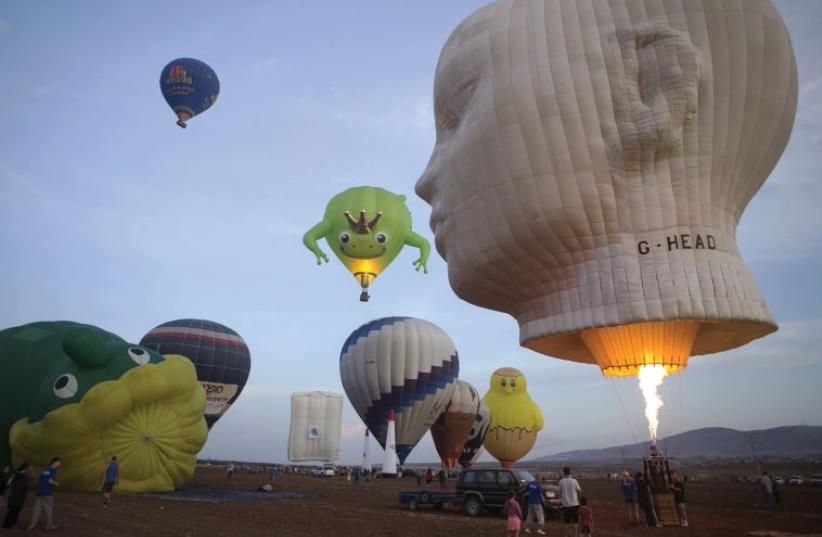 The International Hot Air Balloon Festival
(photo credit: BAZ RATNER)
Advertisement
1. A TALL TALE Director Steven Spielberg brings Roald Dahl’s beloved children’s classic The BFG to the big screen. The film follows Sophie, who is snatched from her orphanage early one morning by the B.F.G. (Big Friendly Giant), whom she witnesses engaged in mysterious activities, and is whisked away to Giant Country. With Mark Rylance, Ruby Barnhill.2. BIG IN JAPAN IN HAIFA The Tikotin Museum of Japanese Art in Haifa, in collaboration with the Embassy of Japan in Israel, is holding Japan Day. The event allows children and adults to encounter Japanese art, language and traditions. Highlights include origami, kimono wearing, readings (in Hebrew) of Japanese folk tales and legends, and the art of Rokkaku Dako (six-sided Japanese fighter kites). NIS 50 includes all activities and workshops.Today (Friday) from 10:30 a.m. Info: (04) 838-3554; www.tmja.org.il.3. BEHIND THE LENS The Tel Aviv Museum of Art presents an exhibition of selected works by American photographer W. Eugene Smith. He developed the concept of the “photo essay” and believed that photography could lead to constructive social change. His photo essays, published mostly in Life magazine, documented forsaken and illfated locations in the US and worldwide. The exhibition of works from the museum collection focuses on single images from Smith’s major documentary series, which epitomize his social and artistic commitment.Until October 29, Tel Aviv Museum of Art. www.tamuseum.org.il.4. STOMP YOUR FEET The Dance Arena Festival of the Interdisciplinary Arena in Jerusalem sets the stage for new works by the country’s top choreographers since 2001. The festival features seven new works within four programs, as well as workshops and sessions with leaders from different fields of art.July 12 to 14 at the Beit Mazia Theater, 18 Mesilat Yesharim St., Jerusalem. Info: www.hazira.org.il.5. FEEL THE STING The German band The Scorpions will perform in Tel Aviv as part of its 50th anniversary tour. The band’s musical style ranges from hard rock to heavy metal. Some of its greatest hits include “Wind of Change” and “Still Loving You.”

July 14 at 9 p.m. at the Menorah Mivtachim Arena in Tel Aviv. For tickets: www.leaan.co.il.6. TAKE A WHIFF The Whiffenpoofs – Yale University’s a cappella choir and oldest collegiate a cappella group in America – are here as part of their annual world summer tour. The well-dressed gents present an evening of entertainment that features barbershop, jazz, folk and country music. The group will collaborate with the YMCA Jerusalem Youth Chorus, comprised of 30 young Jews and Arabs.

July 10 at 8 p.m. at the Jerusalem International YMCA. For tickets, call (02) 569-2684.7. KIDS IN THE SPOTLIGHT The 12th Tel Aviv International Children and Youth Film Festival is taking place from July 8 to 16 at the Tel Aviv Cinematheque. The festival features a selection of films from Israel and around the world, as well as events and workshops for children of all ages. All the films have Hebrew subtitles or are dubbed in Hebrew. The festival includes an international competition, programs of movies made by children and young people, documentaries, shorts and panels about directing movies for children.For the full program, go to www.cinema.co.il.8. MUSIC ON TAP The Rishon Lezion Live Park plays host to one of the most established music festivals in the country. On July 13 and 14, some of the country’s top musicians will perform as part of the annual Goldstar Beer Festival. These include Avraham Tal, Mosh Ben-Ari, Dudu Tasa and Hadag Nahash. Entrance is NIS 45. Info and tickets: www.zappa-club.co.il or *9080. 9. UP IN THE AIR The International Hot Air Balloon Festival is taking place in the Galilee, with a host of activities for the whole family. These include acrobatics, fire shows, balloon flying and concerts, as well as a special GLOW event each night, which involves the fiery hot air balloons lighting up the sky.

July 14 and 15 at Park Ma’ayan Harod near Mount Gilboa. For more info: http://gobalon.co.il .10. REASON TO RHYME Kfar Saba is hosting a poetry festival designed for children from July 13 to 16. The theme of the festival is “Hebrew poets through the ages” and will include tributes to Chaim Nahman Bialik and Leah Goldberg among others. The entertainers include Yehoram Gaon, Aviv Geffen, Matti Caspi and the Israel Opera soloists. There will also be children’s plays and films.Tickets and info: *6775; www.tarbut.kfar-saba.muni.il.