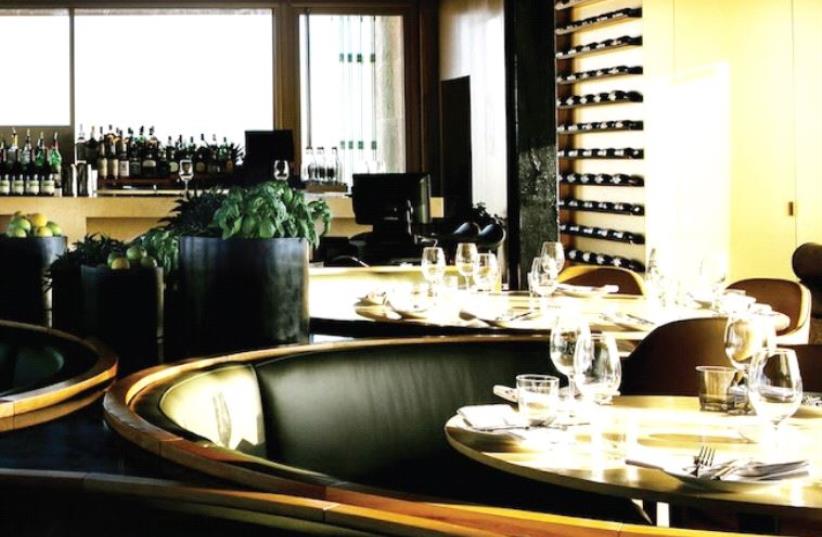 The Herbert Samuel restaurant
(photo credit: PR)
Advertisement
One of my favorite culinary memories was visiting my aunt and uncle’s kosher resort in the rural expanse of Millis, Massachusetts, as a kid. The meat knishes, soft and golden brown and filled with the most delectable combination of ground beef and spices, were matched only by their rich aroma which I’ll never forget.Those long-lost sensations came flooding back during a recent visit to the new Herbert Samuel restaurant in Jerusalem’s Zion Square, situated on the 11th floor of the Herbert Samuel Hotel. However, it wasn’t knishes this time but an upscale creation by chef Oren Yerushalmi called cannelloni.When in doubt, eat it, don’t name it. Let’s just say that Yerushalmi’s Jewish heart and soul were apparent within the flaky pastry and the filling of slowcooking veal breast and chard, porcini stock and Italian mushrooms (NIS 58/88). It had that old world feel but was vitally modern.That’s the gift the young chef – who trained in New York and most recently manned the kitchen at the Scala restaurant in the David Citadel Hotel – brings to the table: updating classic food in innovative ways without drowning in pretentiousness.As a result, the level of kosher cuisine in the capital has advanced a few notches with the arrival of Herbert Samuel. And it’s not just due to the cannelloni, one of the three exquisite items under the homemade pasta category on the compact but versatile menu.The melt-in-your mouth gnocchi served with cauliflower, sun-dried tomatoes, artichoke hearts, wild spinach and basil (NIS 52/NIS 74) was just as flavorful as the cannelloni. And the Jerusalem ravioli – baked pastry filled with crushed chickpeas and herbs and floating in chickpea cream (NIS 42/NIS 58) was only a step behind.The two prices signify a full portion and tapas portion, which allows diners to sample a variety of offerings without breaking the bank.That set-up also applies to the raw section that includes a zingy chopped tuna – in a gazpacho of yellow tomatoes, tarragon and za’atar (NIS 42/NIS 62), a sublime red tuna charred on a hot iron and served with tempura of pickled cabbage Maki (NIS 56/NIS 78) and Ottoman Kube Niyah – raw beef, broken burgul and a spicy Turkish paste (NIS 44/NIS 58).For lighter fare under the “The Way We Like to Start at Herbert Samuel” category, there was the restaurant’s trademark tomato salad, perfected for years at its Tel Aviv and Herzliya locations (NIS 38/NIS 52); a summer greens salad enhanced by nectarines and roasted almonds (NIS 42); and scorched cabbage leaf, a variation on another old Jewish favorite, stuffed cabbage, this time loaded with herbs, rice, chard and Persian lemon stew and Jerusalem artichoke cream (NIS 36/NIS 48).The restaurant’s setting is as tasteful as the food, with elegant design, a panoramic view of Jerusalem from terrace seating, an open kitchen featuring a bustling array of chefs and sous-chefs, a pastry table where desserts and homemade breads are created before your eyes, and a very well-equipped bar offering cocktails such as the refreshing Cucumber – (Beefeater gin, lychee, cucumber and fresh basil (NIS 48); and the kicking Pink Mule – Absolut cilantro, rose water, ginger and cilantro blossom (NIS 48).Together, it creates a relaxed, comfortable vibe, aided by the bevy of wait staff, who seemed to be attentive to all the needs of the diners throughout the expansive room.The eight main courses provided a variety of meat and fish options, including drum fish with greens, leek cream and leek stock (NIS 156); and splurges like beef chateau with split peas cream at NIS 68 per 100 gr. And Prime Rib aged for 40 nights at NIS 56 per 100 gr.We tried the fillet of beef, a huge mountain of tender meat served with beef stock sauce, mushroom ragout and potato puree (NIS 168). It couldn’t have been better and made the accompanying roasted bone marrow on the side redundant. The Supreme – chicken breast on the bone with mashed potatoes, onion rings and smoked barbecue sauce (NIS 78) – was bursting with flavor but was probably the most ordinary offering of the night.Lovers of foie gras will go into a fetal position over the Herbert Samuel version, which is scorched with apple cider and sage caramel sauce and served with dates atop a slice of grilled halla (NIS 92).That’s enough for any mortal, but if there’s any room left, the chocolate egg features 50 shades of chocolate (NIS 52). After it is wheeled over from the confectionary table, one of the staff lights the egg on fire, and the chocolate melts into a gooey, glorious mess. For more modest endings, there’s Basbusa – plum jam and pistachio ice cream (NIS 46); and the Bracha Mountain – tahini sorbet, espresso and sesame (NIS 42).The Herbert Samuel restaurant may be Jerusalem’s new kid in town, but it has already risen to the top of the culinary heap for that special occasion when an ordinary restaurant just won’t do.