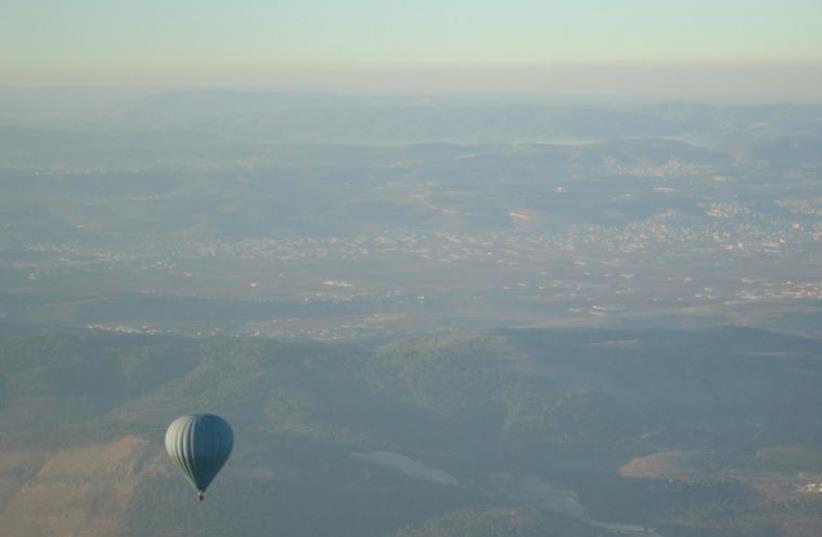 A hot air balloon ride over Israel’s North
(photo credit: PR)
Advertisement
Around 3,000 meters up in the air, Captain Amir calls on his radio: “Mashiah, Mashiah. Come in, Mashiah.”He’s coordinating with our second hot air balloon, off in the distance, hovering in the sky in the mid-morning haze.This winter, hot-air balloon company SkyTrek Israel is offering a special on rides that provide an exciting activity and an appreciation of the Jezreel Valley. For a midweek flight, the cost is NIS 670 per person, reduced from NIS 1,050. On weekends, the cost is NIS 820 instead of NIS 1,200. Children as young as six can go for a ride for NIS 250 instead of NIS 650. The whole experience lasts about four or five hours.The launch site is located just outside Afula, and call time is before sunrise, 5:30 a.m. Included in the package is an early morning picnic, and the crew cheerfully hands out blankets to combat the morning chill.The history of ballooning and safety standards are discussed beforehand while soon-to-be flyers can enjoy seeing the giant balloons begin to inflate.Hot-air ballooning is one of man’s first successful attempts at flight. Employing the technology of airborne lanterns, heated air is blown into an “envelope,” or balloon, and allows it to rise. The balloon is buoyant because the air inside is less dense than the air outside.The first successful manned hot air balloon took flight in France on November 21, 1783.While the hot-air balloon was one of the first forms of military air warfare, it came into the leisure realm, with balloons of all shapes and sizes finding new fans every day.The Gilboa Hot Air Balloon Festival, which takes place during Succot, is probably the most well-known hot-air balloon event in Israel. Every year, thousands of attendees watch balloonists make their way from the northern Gilboa region down to the Negev.In Tel Aviv, a stationary hot air balloon was inaugurated this year. A popular attraction in major cities all over the world, it allows visitors to rise above for spectacular views of their city.But heading into the countryside is a different experience.One hops into the basket. There are no door latches – which is reassuring thousands of meters in the air, knowing that it can’t just “slip” open. Then the captain readies for takeoff. The basket is partitioned into five sections. About 16 people can fit, with the captain in the middle with the gas canisters.As we rose into the air, an eerie feeling of weightlessness took over. And as the altitude increased, our ears began to pop.Whereas on the ground the early morning wind had a biting chill, the air high above was still and warm. It was exceptionally quiet, as passengers seemed to have lost their words as they took in the scenery around them. The captain’s intermittent squeezing of the gas lever, releasing a torrent of fire into the inflated balloon, broke the silence.As the sun rose in the east, the landscape was illuminated below. Like a topographical map, one could point out the nearby villages and cities. Out in the distance – on a clear day – one can see Mount Hermon to the north, Jordan to the east, and Haifa to the west.The ride itself lasts around one hour.As part of the SkyTrek experience, a picnic breakfast is set up at the landing site. There’s a champagne toast to a successful voyage, followed by an Israeli breakfast of salad, hummus, olives, cheese, bread and eggs arranged on an open farm field.Passengers are also presented with a certificate of completion of the voyage (also in magnet form for the fridge) and a photo taken during the experience.While soaring thousands of meters above the ground, the captain makes good use of a selfie stick for one of the most memorable selfies you can share with your family and friends. ■  The writer was a guest of SkyTrek.