Musicians and audience members were having fun in a festival that is always a joy to attend. 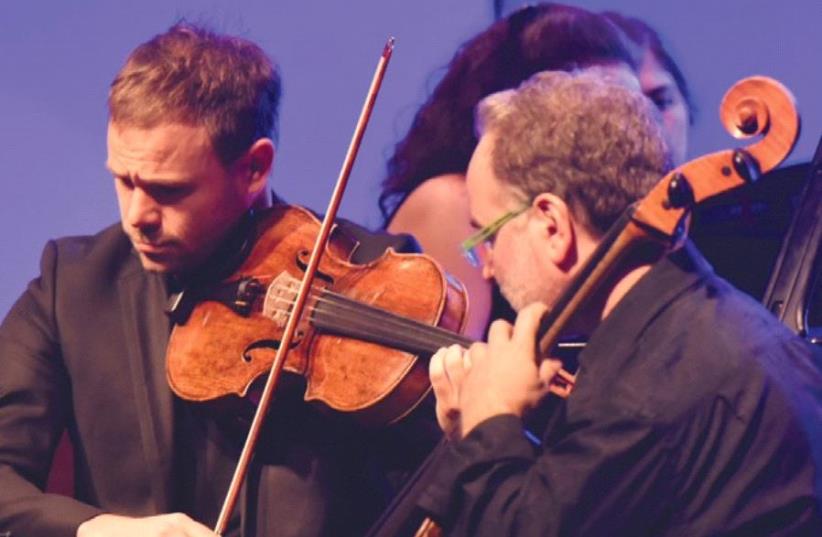 VOICE OF Music Festival artistic director and cellist Zvi Plesser (right) performs with viola player Amihai Grosz.
(photo credit: GALILEE REGIONAL COUNCIL SPOKESPERSON’S OFFICE)
Advertisement
The Voice of Music Festival is always a joy to attend.For starters, naturally, there is a plethora of quality sounds to be aurally imbibed, and the locale ain’t half bad either. There is something about making your way across the sprawling lawns of the Pastoral Hotel at Kibbutz Kfar Blum, to the somewhat musty and delightfully antiquated Bet Ha’am, or to the state-of-theart Clore Center for Music and Dance, to hear concerts at all hours of the day. It sort of gets you in the requisite frame of mind.The 33rd edition of the festival closed on Shabbat, and it appears that artistic director and cellist Zvi Plesser, who has been at the helm for the past four years, is starting to let his hair down. The disciplinary and emotional spread of the week-long program has taken on extra breadth over the years, and Plesser – always a genial chap – has taken to introducing some comic elements into the generally serious performance fray.The closing slot of the festival was a delightful case in point.The brief farewell concert opened with Galanta Dances, a sextet written by 20th century Hungarian composer, linguist and philosopher Zoltán Kodály and arranged by Ohad Ben- Ari. The work was rendered with due deftness and subtle sonority. Then came Schleptet in E flat major, by a certain P.D.Q. Bach. As we know, J.S.Bach produced numerous progeny, including some who made their own contributions to the evolving oeuvre of Western classical music – such as C.P.E. Bach, Wilhelm Friedemann Bach and Johann Christoph Friedrich Bach, to mention but a few. But P.D.Q. does not ring a bell. That’s because he is a fictitious composer invented by now 82-year-old musical satirist “Professor” Peter Schickele. Schickele developed a long career, performing the “discovered” works of the “only forgotten son” of the Bach family.It soon became apparent that the seven musicians, including Plesser, were having fun, as were we. Violinist Gili Schwarzman soon had us happily surprised as she leapt out of her seat in mid-arpeggio, bow held gaily aloft. There were also intermittent wind instrument expletives, as well as some group and individual shouting.The previous day’s family/ kiddies oriented version of Carl Orff’s The Carnival of Animals, performed by 10 players wearing comical zoological headgear, was also enjoyed by one and all, and closed with children of all ages taking to the stage waving with ribboned sticks.On the more serious side, a trio from the socially-minded Musethica NPO – including Musethica co-head violist Avri Levitan, violinist Edi Kotylar and cellist Haran Meltzer – did a good job with Mozart’s Divertimento in E flat major, while husband-and-wife piano playing duo Xak Bjerken and Miri Yampolsky conveyed just the right degree of romantic sentiment in their version of Rachmaninoff’s Suite No.2 for Two Pianos. Suite for Bassoon and Piano by 20th century Polish Jewish composer Alexandre Tansman, played by Bjerken and Mor Biron, and Brahms’s Sonata for Piano and Violin No.2, performed by Dutchborn violinist Rosanne Philippens and Korean pianist Sunwook Kim rounded off a typically and pleasingly eclectic program.