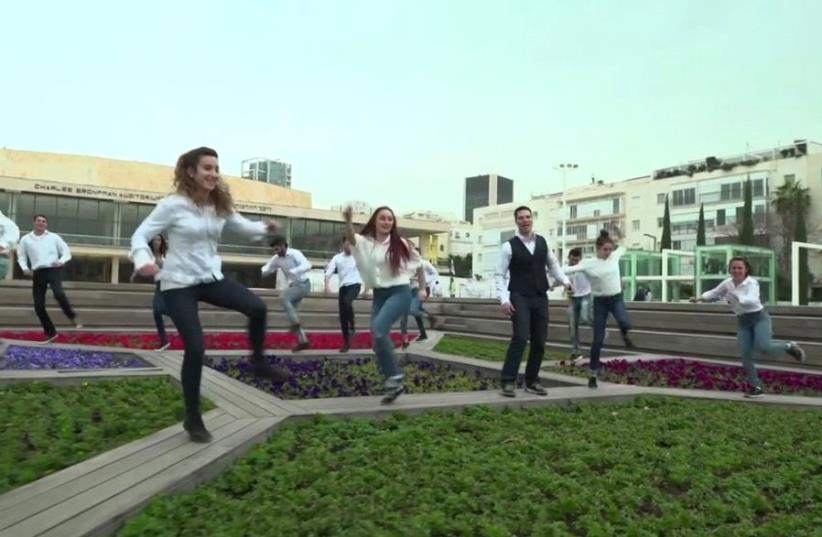 Israel Songs for Peace Mashup - Dance Spectacular! - Elliot Dvorin | Key Tov Orchestra
(photo credit: screenshot)
Advertisement
Twirling, flipping and waltzing around Tel Aviv, Elliot Dvorin and his team of dancers have one thing on their minds: peace.That’s the theme of the Chicago- based musician’s latest video, a mash-up of classic Israeli songs about the dream and yearning for peace. As Dvorin sings Oseh Shalom and Heveinu Shalom Aleichem, a pack of youngsters shimmy around him from Habima Square to the rolling waves of the beach, Rabin Square and the Sarona complex.“These are the songs that I knew growing up and singing about...they’re just popular songs on the topic of peace,” Dvorin told The Jerusalem Post. “I think that we forget sometimes that we’re always looking for peace and it’s embedded in the culture and in the songs.”Dvorin had the idea a year ago, and waited until he could come to Israel earlier this month to film for this production and a second video on Jerusalem that is set to come out in May.“Knowing the songs, once I had the idea it made sense – it kind of just flowed,” he said. Dvorin, who leads the Key Tov Orchestra, a wedding band, said he did the arrangement for the songs last year and the mash-up “kind of wrote itself.” As the dancers sashay around him, Dvorin works his way through classics like Yaase Shalom and Hinei Ba Hashalom as well as more modern takes, like Mosh Ben-Ari’s Od Yavo Shalom Aleinu (Salaam) and Uzi Hitman’s Ani Noladeti Lashalom.This isn’t Dvorin’s first Jewish song mash-up; two years ago, his Hanukka song video went viral, garnering more than a million views on YouTube and landing him on the local news. He’d be happy if his latest video goes viral, but said that isn’t the point.“It’s always nice when that happens, but I guess I’m more looking to put out a quality video and something that’s enjoyable,” he said. “I think the view count is secondary to the quality.”