We should all be eating more blintzes this year

How to go about making a blintz that’s mostly a memory? 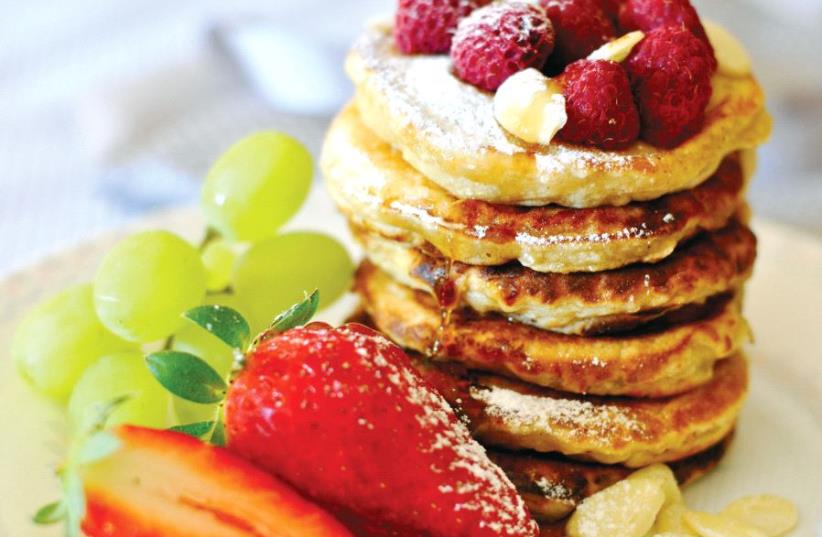 This recipe originally appeared on The Nosher.

My not-so-healthy Jewish food resolution for 2020 sounds simple: Eat more blintzes. But as with the best blintzes, it’s a little more complex than this simple statement.

My grandmother, Mama Pearl, was 99 when she passed away in February. She was my baking buddy and Crisco guru. She taught me to make apple pie when I still had to stand on a stool to reach the counter, and I’m now the keeper of her index box full of sweet recipes for everything from Passover apple fritters to pecan chocolate pie.

One thing I never learned to make, though: her blueberry blintzes.

No restaurant, diner, Jewish food emporium or synagogue has ever served me a blintz that looked like Mama Pearl’s. The dough was so thin it was nearly transparent, and the whole blueberries in the filling — never jam — pushed up almost to the point of breaking through. Forget any tightly folded blankets of barely filled dough, these looked more like children’s sharp elbows poking up under the sheets.

How do I remember what they look like so clearly? I’ve got the last one in my freezer. She made it as part of a batch in the summer of 2018, and I held on to it thinking I’d wait until she made more. Now I’m too emotionally attached to either eat it or throw it away. The only thing I can think to do is to master her recipe and create more to keep the “one” company, so I don’t have to continuously check to make sure no one has eaten it or defrosted my freezer in the night.

But how to go about making a blintz that’s mostly a memory?

To the recipe box I go. Only there’s no recipe here, and I’m not really surprised. A blintz is the kind of instinctual comfort food women of her generation made simply by the memories in their hands.

So to the internet I head, but as with my restaurant quest, I can only find “fresh blueberries” that have been cooked down into jam.

Then my mom saves the day with a recipe she wrote down by watching over my grandmother’s shoulder, and it’s exactly how I remember it.

I head back to my own kitchen and pull out my frozen keepsake, which I’ve been too emotional to do before now. The blueberries have shriveled from being in the deep freeze for two years, and there’s a layer of frost on one side that nearly brings me to tears.

In fact, everything about my New Year’s blintz project makes me verklempt. I don’t want to be the only holder of the last blintz, what I truly desire is impossible: for my grandmother to make me a cup of coffee from her 50-year-old percolator and ask me to take out the garden furniture while she fries up her sweet summer specialty.

But a funny thing happens as I pour and swirl the batter in the frying pan: My own hand memories start to kick in. I can picture mama in the kitchen, and I know I’m going too slowly. The only way to get a thin, lacy blini is to make the pan hotter, pull it away from the heat quicker and swirl it more deftly, like she did.

In the end, my pancakes are a bit thick, but my blueberries are lemony and delicious, bursting with flavor and still whole.

The first batch was good, but there’s room for improvement. And that, I think, is the best part of having a New Year’s resolution to eat more blintzes: I still have the whole year to get it right.

Directions: 1. Blitz all the blintz ingredients in a blender (consistency of the batter should be smooth with no lumps).

2. Heat a nonstick skillet on medium heat until hot and lightly grease with butter.

3. Pour about 1/8 cup (or 2 tablespoons) batter into the pan and tilt the pan in a circular motion until the batter coats the entire bottom of the pan in a large, thin circular shape.

4. Cook for 60-75 seconds until the edges of the blintz brown and the bottom is lightly golden. (You can tell it’s ready by touching the center of the pancake’s surface — it should be dry and slightly tacky to the touch.) Do not flip the blintz to cook the other side.

5. Place the blintz on a plate lined with parchment or wax paper. Repeat process until all batter is cooked — this should yield around 18 blintzes. (Keep the blintzes separated by pieces of parchment paper, wax paper or paper towel. This will help keep them from sticking together.)

6. Combine all ingredients for the blueberry filling.

7. To wrap blintzes, place 1 tablespoon blueberry filling just off center. Fold the top down and the sides up over the filling, then roll down to the bottom (because the blueberries are lumpy, go slow and try and to stretch the dough over them without tearing it).

8. You can either serve the blintzes at this point or freeze them for later use. When you’re ready to eat them, fry them on all sides in butter in a nonstick pan until golden. Serve with sour cream. Serves 8.