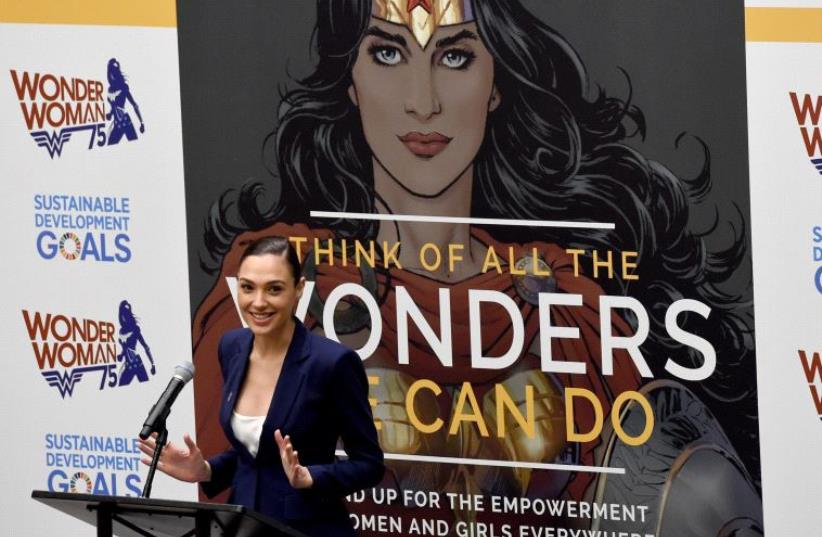 Actress Gal Gadot speaks during a ceremony as the UN names the comic character Wonder Woman its Honorary Ambassador for the Empowerment of Women and Girls during a ceremony at the United Nations Economic and Social Council Chamber on October 21, 2016, in New York
(photo credit: TIMOTHY A. CLARY / AFP)
Advertisement
The power of Wonder Woman is strong. So strong, that the blockbuster superhero film crossed another epic milestone this weekend, becoming the top-grossing live-action film directed by a woman.Over the weekend Wonder Woman, the DC Comics movie helmed by Israeli actress Gal Gadot, passed a whopping $615 million in box office sales worldwide. That moves the Patty Jenkins-directed film past the record that was held by 2008’s Mamma Mia. That film, which was directed by Phyllida Lloyd, grossed a total of $609.8m. Wonder Woman has made more than $300m.in North America and over $315m. internationally so far.
New trailer for "Wonder Woman" played by Israeli actress Gal Gadot released (credit: REUTERS)
It’ll have a long (and unlikely) way to go before passing the highest-grossing film ever made by a female director: 2013’s 3D computer-animated Frozen, which made $1.28 billion globally.But the film is still soaring, showing little signs of letting up despite it being out for more than three weeks.It has already passed the US total for 2012’s Man of Steel, and looks well placed to surpass both 2014’s Guardians of the Galaxy and 2016’s Deadpool.If it does that, according to Forbes, it will become the highest-grossing comic book movie ever in North America to not star Batman, Spider-Man or Iron Man.Forbes predicts Wonder Woman is “probably going to be one of the biggest-grossing comic book superhero movies ever in North America, as well as one of the leggiest.”

Wonder Woman is also the rare movie this summer that has been able to post a relatively equal split between US and international earnings. Other summer blockbusters are leaning heavily on the international box office, especially China.It’s a big win for Warner Bros. and DC Comics as well as for Jenkins, which have pulled off a movie that has been received well by both audiences and critics. Jenkins is reportedly already involved in drafting a script for the sequel.In the US market, Wonder Woman is the third-highest earning movie of 2017 so far behind Disney’s Beauty and the Beast and Guardians of the Galaxy Vol. 2.And while controversy swirled last week about Gadot’s seemingly low pay for her first three Wonder Woman films (a claim largely debunked), the movie’s overwhelming success makes it clear: She’ll be able to demand serious cash in the future.