Menashe tells the story of its eponymous hero, a Hassidic widower in the ultra-Orthodox neighborhood of Borough Park, Brooklyn. 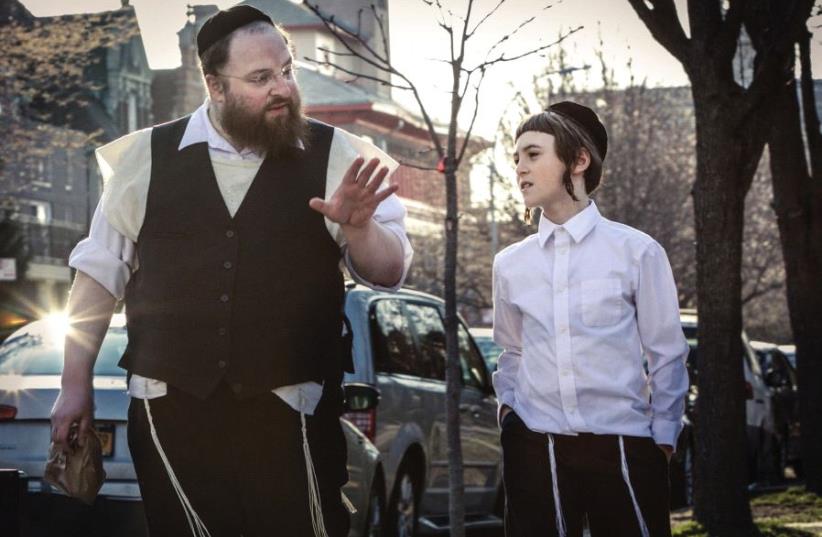 YIDDISH ACTORS Menashe Lustig (left) and Ruben Niborski star in ‘Menashe.’
(photo credit: FEDERICA VALABREGA)
Advertisement
Two of the hottest tickets at this year’s Berlinale were for an American film entirely in Yiddish and a 30-year-old Israeli movie mainly in Arabic.Joshua Z Weinstein’s Menashe and a digitally restored version of the late Rafi Bukaee’s 1986 Avanti Popolo had their international premieres in Berlin, where they played to enthusiastic, standing- room-only crowds.Menashe tells the story of its eponymous hero, a Hassidic widower in the ultra-Orthodox neighborhood of Borough Park, Brooklyn. In this touching and nuanced film, Menashe is struggling to hold down a job at a grocery store and to raise his son, who has gone to live with Menashe’s wealthy but judgmental former brother-in-law. The rabbi says the boy can only move back home after Menashe takes a new wife, but Menashe doesn’t feel ready.Although he grumbles, he won’t openly defy his rabbi, and keeps going on awkward dates. He can’t quite follow the rules and he can’t quite rebel. In the course of the movie, everything that can go wrong for Menashe does go wrong, and it often goes wrong in front of his son, the one person he loves and whose respect he desperately craves. But for all his misfortunes, Menashe is an extremely winning character, and you root for him even though he is often his own worst enemy.Weinstein, a documentary filmmaker who has also worked as a director of photography, did not know Yiddish and did not grow up in the ultra-Orthodox world, but became fascinated with Brooklyn’s haredim.“I was interested in making a film about Jews, not a Jewish film,” said Weinstein.The first challenge in making Menashe was finding Yiddish speakers who would work with Weinstein and his co-writers, Alex Lipschultz and Musa Syeed, a director who has made such films as Valley of Saints, and who may well be the first Muslim to write a Yiddish movie.It wasn’t easy trying to find actors among a community that rarely sees movies and places heavy restrictions on cell phone and computer use.“Any intelligent person would not make a film like this,” said Weinstein. Speaking of the casting process, he said, “I would call it un-casting,” because people would agree to participate, and then change their minds when their rabbis forbade them or they had a change of heart, with dizzying frequency.Eventually, he met Menashe Lustig, who had posted comedy videos in Yiddish on YouTube. Once he got to know Lustig, he realized the film should be based on Lustig’s life story. While he enjoyed Lustig’s “Charlie Chaplinesque side,” he was more drawn to his “big soul... he’s had a hard life.”Lustig, a soft-spoken man who can light up a room, accompanied Weinstein to Berlin and appeared at a Q&A following a screening with Weinstein and one of the movie’s co-writers, Alex Lipschultz. Lustig, whose first language is Yiddish, said that he wanted to “cry with joy” as he saw his story on screen.Once the director had his leading man, he had to find someone to play the son, which was an even more daunting task. After a long search, they found Ruben Niborski, the son of Yiddish scholars from Jerusalem.Although at first Weinstein thought he might be able to make the film out of his actors’ improvisations, he realized it needed a script. He and his co-writers began a laborious process of writing in English, and then getting the script translated into Yiddish. The result is that the movie is completely in Yiddish, except for a few lines of dialogue for Menashe and the Latino guys who work with him at the grocery.The movie was shown at Sundance, and will be screened again in the US at the New Directors New Films festival in March in New York. There are also plans for a Jerusalem showing, but no date has been set.Berlinale audiences also warmed to a sold-out screening of the 30-year-old cult classic Avanti Popolo, which was shown in the presence of its director’s widow, Maayan Milo, and its star, Salim Dau.Bukaee, the director who expanded what was originally intended to be a 25-minute student film into a full-length feature about Egyptian soldiers trapped behind Israeli lines at the end of the Six Day War, passed away in 2003.Israel Film Archive manager Meir Russo spoke about the drawn-out process through which the film was digitally restored by the Jerusalem Cinematheque, with support from the Ostrovsky Family Fund, the Israel Film Fund, the Micha Shagrir Collection (the late Shagrir produced the film) and the Austrian Hospice. The restored version had its Israeli premiere at the 2016 Jerusalem Film Festival to mark the 30-year anniversary of its debut there.“I think the film looks better today than when it was released,” said Milo. “And it’s even more relevant than it was 30 years ago.”Dau, whose turn as a Shakespearean actor lost in the desert is one of the greatest performances in the history of Israeli film, noted that when the film was released, it was the focus of controversy and criticism, particularly of the scene in which Dau’s character quotes the famous Shylock “I am a Jew” speech from Merchant of Venice to gain sympathy from Israeli soldiers.“When a Jew makes a movie about Arabs, everyone asks, ‘Why did he do this or that?’” said Dau. He noted with pride that he had helped Bukaee develop the characters and the script.The audience burst into applause and cheers during some of the more rousing scenes in the film, and sat in silence during the tragic moments.