Gal said that it was a joy to return to his roots – “not to mamaloshen but to Bobba loshen.” 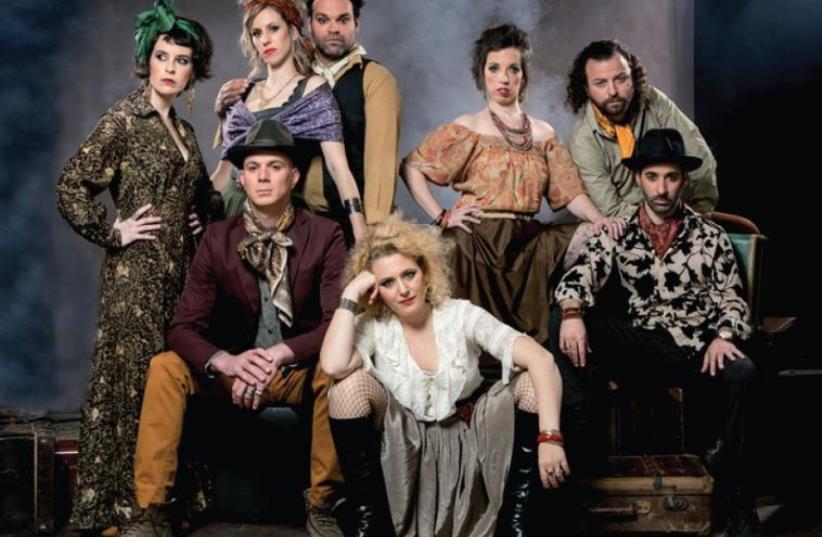 Yiddishspiel’s (Tel Aviv Yiddish theater) production of ‘Gypsy Soul’
(photo credit: COURTESY YIDDISHSPIEL)
Advertisement
At age 70, most people are retired or contemplating retirement. But not in theater, where actors keep returning to the stage for as long as they can remember their lines. There are quite a number of octogenarians and nonagenarians amongst Israel’s thespians. Veteran actor Dubi Gal, who turned 70 last month, is making his debut in Yiddish theater in the current Yiddishpiel production, a musical comedy the name of which in English is Chasing Sweets, in Hebrew Ratzot el Hakugel (Running to the Pudding) and in Yiddish Varam und Geshmak (Warm and Tasty).Forgetting about the title, the translation by the multi-talented Lea Szlanger is very good, with a few amendments to suit the Yiddish idiom, and one possible grammatical error which may have been deliberate.Though set in the US prohibition era of the 1920s and 1930s, the dialogue includes many up-to-date concepts regarding acceptance of the other and the LGBTQ community. There’s also a sexy singer, who says “Me Too” in English because it has become a universal watchword, but then corrects herself and says in Yiddish “Ich oich.” But Ich is the subject – I. Me is the object, so the Yiddish for “Me too” should be “Mir oich.” But the character so convincingly played by Meital Nutick is not only a singer. She’s a floozy, who is not backward in coming forward and bears an uncanny resemblance to Marilyn Monroe. Director Yonatan Esterkin  has created recognizable images on characters with other identities. The character played by Nutick, for instance, is called Fania, but with superb make-up and a blonde wig, a Monroe-esque figure, plus whispery vocals and a Yiddish rendition of  ‘I want to be loved by you’, she could have easily been a Monroe understudy.By the same token, Gal singing a Yiddish version of There’s no Business like Show Business, proved his versatility with some fancy footwork reminiscent of Fred Astaire, and earned a spontaneous round of applause from the audience. The on-stage partnership between Nir Shafir and Yonatan Rozen, who play two New York Jewish musicians who often find themselves in the wrong place at the wrong time, evokes memories of Jack Lemmon and Walter Matthau, while Israel Treistman, who has been a leading figure in Yiddishpiel productions for 30 years, plays Jewish gangster Dutch Schultz, but looks and sounds like Marlon Brando in The Godfather. In Yiddish, it all gets a different twist.Not for the first time has Esterkin introduced a b&w movie backdrop to add a sense of authenticity to what’s happening on stage.As scenes change, the actors wheel the sets on stage, and instantly use them to continue their roles.Gal appears as both narrator and actor. In the latter, he plays a New York policeman and a Hollywood film director.He also knows how to draw laughter at his own expense. Shorter than average in height, he tells the audience that his big dream when he was young was to be a basketball player, but he was rejected on the grounds that he did not have sufficient motivation, so he became a film director because in the movies.  dreams can become real.The plot revolves around two musicians, Hershey (Rozen) and Mendel (Shafir), whose gigs took place in speakeasies that were raided by the cops, so the duo kept on finding themselves out of work, homeless and hungry.Eventually, by going into drag, they find themselves as members of an all-women’s band which has been signed up to appear in Florida. Thus begins a comedy of errors. To elaborate further would be a spoiler.Suffice to say that this is a high standard production, almost but not quite devoid of traditional Yiddish slapstick. The actors obviously enjoy what they’re doing, and this feeling conveys itself to the audience whose ongoing appreciation is expressed in roars of laughter and applause.At a gala performance this week for the Friends of Yiddishpiel, the only song from the regular Yiddish repertoire was in the grand finale when al the cast came together to sing Bei mir bist du shein with the  audience joining in with gusto.An obviously emotional Gal who was thrilled with the way he had been received, called everyone remotely associated with the production to join him on stage. He said that it was a joy to return to his roots – “not to mamaloshen but to Bobba loshen.” His parents, who regarded themselves as pioneers when they came to the Land of Israel, spoke Hebrew, but his grandmother spoke to him in Yiddish.When Yiddishpiel director Sassi Keshet called him and urged him to appear in a production, he had reservations, having never previously acted on the Yiddish stage, but was cajoled by both Keshet and Yiddishpiel CEO Zelig Rabinovich, and he was glad that they had prevailed.“Your reaction warmed my heart,” he told the audience.Yiddishpiel goes on tour around the country and performances of this production are scheduled to keep going until the end of May. Till then, performances will take place in Petah Tikva, Rishon Lezion, Beersheba, Ashdod, Tel Aviv, Bat Yam,  Haifa and Ramat Gan.For more info see http://www.yiddishpiel.co.il/en/