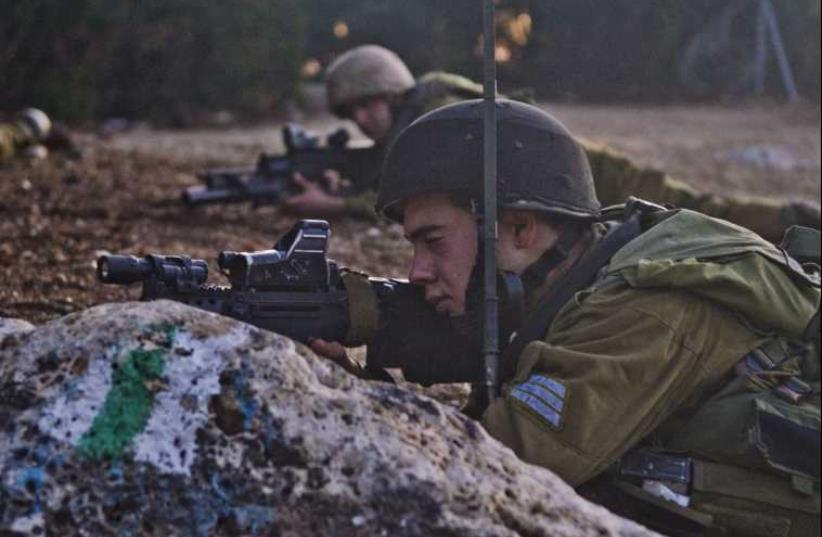 Sword Battalion holding a combat drill in 2013.
(photo credit: IDF SPOKESMAN’S UNIT)
Advertisement
The army’s decision on Monday to dissolve the 299 Herev (Sword) infantry battalion is “the right decision that caters to the need of Druse youths to integrate into the IDF, and into society,” a former Druse government minister told The Jerusalem Post on Tuesday.Salah Tarif was the first non-Jewish cabinet minister, serving as minister of minority affairs in the Prime Minister’s Office under Ariel Sharon in 2001-2002. He was a captain in the Paratroop Brigade in the late 1970s.“I welcome this decision,” Tarif said on Tuesday. “I am sure that the chief of staff has the best interests of the Druse at heart. This unit may have been right for the 1960s and ’70s, but today, the Druse youths are completely Israeli. They are ambitious, and set on integration. Druse soldiers can be found in elite IDF units, and at the command level, like the Golani Brigade commander [Col. Ghassan Alian].“We don’t need a separate battalion like the haredi and Beduin battalions. This creates problems. The decision is correct, and was taken after the army consulted with the leader of the Druse community [spiritual leader Sheikh Muwafaq Tarif, a cousin of Salah Tarif], who asked for career soldiers to be looked after,” Tarif said.An army source said on Monday that no 299 battalion career officer would be fired, and that all would be transferred to other units. “Having an ethnic, sectoral battalion is not something we want. It creates limitations, and the youth today want all options open to them,” he added.Whatever advantages the battalion provided in the past due to its Arabic-speaking personnel have been rendered irrelevant by the rapidly changing battlefield, Tarif said.“The emphasis today is technological. War is different. There is added value and increased productiveness in mixing Druse and Jewish youths. It is important for both,” he said.The Herev Brigade was founded in 1948 as the Minorities Unit.Tarif served in the IDF for seven years, and became a career officer. In 1983, at the start of his political career, he became mayor of Julis, near Acre, serving as the youngest-ever head of a local council.His son served as an officer in the elite Egoz reconnaissance unit of the Golani Brigade. Such paths in the army are the right models to follow in 2015, Tarif said. “We should not force the youths to keep to traditions,” he said.