Emancipation at the right moment – hametz and beyond

Two key aspects of hametz underscore the fact that there is more to the concept than meets the eye. 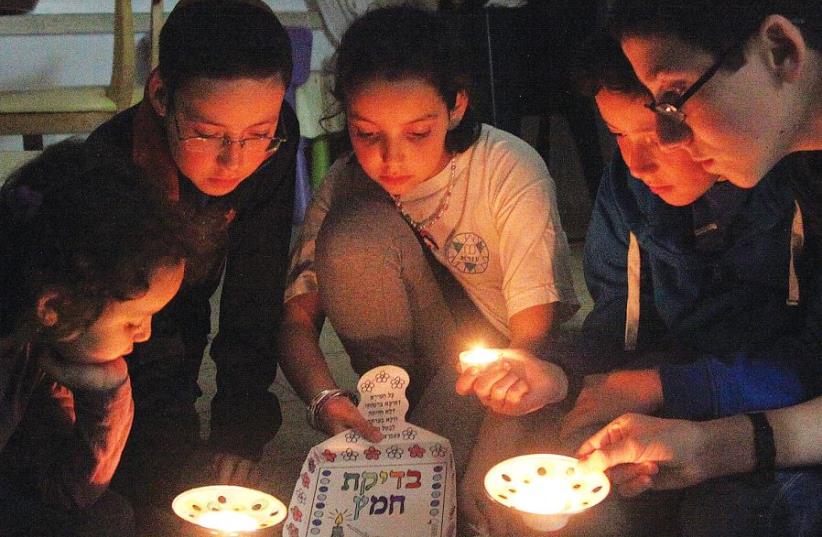 MEMBERS OF the Nataf family take part in ‘bedikat hametz’ ritual in Jerusalem.
(photo credit: MARC ISRAEL SELLEM)
Advertisement
When Passover approaches, all the cleaning issues arise. There are those who actually do it, those who think of doing it and those who are aware of others who clean for Pessah. In any case, the theme of hametz, the fermentation of cereal, is central to this festival, since “Unleavened bread will be eaten these seven days, but no cereal ferment shall be seen, nor any sourdough shall be seen within all your borders” (Exodus 13:7) Why is getting rid of hametz so significant in a festival reminding us of liberty, of our freedom from slavery in Egypt? Cereal ferment symbolizes two essential principles related to freedom. It is not enough to simply recall them in our minds – we must take a practical action to strongly root them in our souls.The first principle is that hametz represents the Egyptian culture. Egypt was known in ancient times as the land of leavened bread and beer. The fermentation process of cereal grains or of dough requires a specific expertise to get a refined product. The Egyptians mastered it. Some scholars think that they even invented the technique that prevented the dough from rotting.Dr. Tovah Dickstein reminds us that the Greek historian Herodotus called the Egyptians “bread eaters,” and this was apparently a widespread nickname for the Egyptians in the ancient world, notes H.E. Jacob in his noted 2007 book Six Thousand Years of Bread: Its Holy and Unholy History.Hametz, the cereal ferment, has a very close relation with Egypt; it is a mark of identification of the ancient Egyptian culture – so much so that Egypt was known because of its bread, not because of its pyramids! Avoiding hametz means disengaging from the Egyptian culture to earn freedom, to become independent, to establish and develop a different culture.If so, why don’t we avoid hametz completely, instead of only during seven days a year? Because it is a symbol and not the thing in itself. By recalling it once in a while, we avoid the indifference created by the routine.Moreover, freedom does not mean the denial of the other culture, but the independence from it. We take the positive elements of the Egyptian culture and reject the negative (like the slavery they imposed on us). Accepting hametz during the year while rejecting it during Pessah, during the festival of freedom, teaches us in a very tangible way both the emancipation from the alien oppressing culture and the reinforcement of its positive aspects.A second key principle at play here is that hametz symbolizes waiting. Sometimes it is important to wait, while in other instances waiting may cause one to miss an opportunity. If our ancestors had waited instead of leaving Egypt when God gave them the opportunity, we would have never been liberated. In Hebrew there is an interesting verb used to express missing an opportunity: l’hahmitz. It derives from “hametz,” and Rabbi Yoshia says: “The same as you don’t leaven the matza, you don’t leaven [=miss] a mitzva, but you fulfill it as soon as you have the opportunity” (Mechilta d’Rabi Yishmael – Bo, Masechta d’Pis’ha 9). This is a negative waiting that causes loss and destruction. Refraining from hametz during the seven days of the Festival of Freedom reminds us that there are certain instances in which we risk losing everything if we just hold and wait.Disengaging from the alien culture so as to emancipate from it and grasping the right moment so as not to miss the opportunity – these are two foundational and essential concepts of the Jewish civilization. Both are related to hametz, the ferment of cereal, and our separating from it in Pessah.