Erdan: I will not support legislation that would harm the police

Amid probes of prime minister, Public Security Minister tries to ease tensions between politicians and police 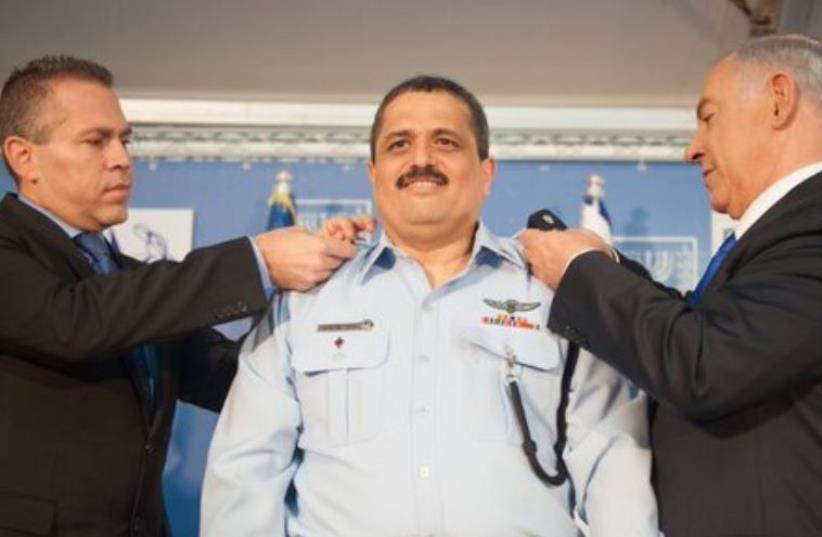 Public Security Minister Gilad Erdan and Prime Minister Benjamin Netanyahu officialy appoint Roni Alsheich as Israel's new police chief
(photo credit: ISRAEL POLICE)
Advertisement
Public Security Minister Gilad Erdan said Tuesday he will not allow legislation that would harm the police or its chief, Insp.-Gen. Roni Alsheich.Speaking at the annual Israeli Security Conference in Yad Binyamin, Erdan was responding to recent legislative initiatives that seek to curb the police’s power, mainly regarding investigations.He stressed, however, the need for parliamentary oversight of the law enforcement authorities.“We are going through tense and sensitive days… There are tensions between the democratic institutions of the state,” he said.“It is this point we need to stop. In Israeli democracy, there is a great necessity for an independent, impartial police. But, at the same time, we have in Israeli democracy a legislative branch that oversees the executive branch and within it there is the police.”Erdan said he believes that on both sides there are people who want the best for the country, but that there is no use in getting involved in unnecessary conflict “at this sensitive time.”The remarks come at what is seen as the peak of tension between politicians and police amid recent legislative initiatives and remarks by politicians that were perceived as attempts to weaken the police.Some have argued that these initiatives – coming mostly from ruling party Likud – were designed to help Prime Minister Benjamin Netanyahu, who is currently under investigation in several probes.Last week, the Knesset passed in a preliminary reading a measure initiated by Likud MK David Amsalem that would stop police from making recommendations to the attorney- general at the end of investigations.Some have said the bill is meant to shield the prime minister from indictment on corruption charges.Another bill initiated by Amsalem that never passed the Ministerial Committee for Legislation sought to bar the police from investigating a sitting prime minister.In another instance, Amsalem told Channel 2 News last week that he had submitted a bill that would essentially decrease the salary of the police chief.He said he was guided by the logic that “it makes no sense for there to be officials in the public sector who earn more than the prime minister who is ‘running the whole business.’ ”If I was the police chief, my good manners wouldn’t let me take NIS 100,000 [salary per month],” he said.Following this move, Alsheich met with four former police inspectors-general and an ally of his who, on Sunday, filed a complaint against Amsalem, accusing him of “extortion and threats.” The latter then said he would file a counter-complaint against Alsheich.Amsalem accused Alsheich and his predecessors of trying to overthrow him, saying that, as head of the Knesset Interior Committee, he oversees the police and that would not change.“I never thought such a thing would happen in the State of Israel,” Amsalem said.“The inspector-general did not call his predecessors for advice on how to handle agricultural theft or gun control.They only spoke about how to handle me and the investigations of the prime minister.This is no joke,” he said.Gil Hoffman contributed to this report.