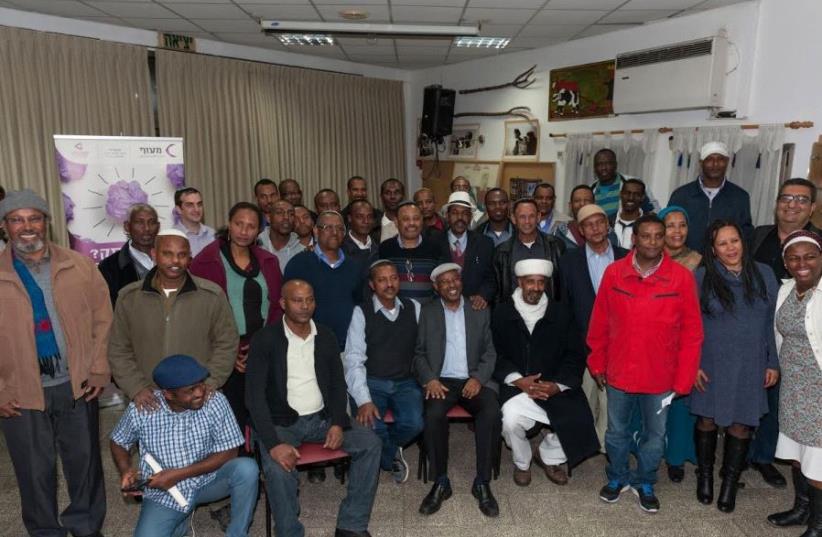 Addis Alam’s founders marked the end of the agriculture course in Ramle
(photo credit: YOAV NIR / STUDIOAB)
Advertisement
Far away from their native rural villages in Israel’s cramped urban centers and absorption facilities, many Ethiopian immigrants have abandoned their previous careers in agriculture.Two brothers, Ya’acov Almo and Uri Ben-Baruch, have decided to change this reality by setting up a new agriculture association called Addis Alam, which means “New World” in Amharic. The group is hoping to acquire a piece of land for Ethiopian immigrants to grow spices, medicinal plants and other crops that are not locally available in Israel, such as teff – a low-calorie, gluten-free grain that can be baked into bread or used to produce alcohol.“All our life we ate this, and then we got to Israel and it wasn’t here,” Almo told The Jerusalem Post on Monday.A common complaint among Ethiopian immigrants when they initially arrive in Israel is about stomach pains, as they begin to replace teff with wheat flour in their diets, Almo said. While some stores eventually began importing teff, the grain remains far more expensive in Israel than in Ethiopia – and often unaffordable for members of the immigrant community, according to Almo.“So we said, ‘What if we try teff in our land?’” he said.“The Holy Land can grow everything.”Almo and his colleagues began growing teff in Ofra, where he has lived for the past 32 years, as well as in an area near Beit Shemesh. Nonetheless, the farmers would like to expand the growth of teff and other traditional Ethiopian crops to a larger plot of land to meet their community’s needs.To realize their vision, Almo and Ben-Baruch turned to the Agriculture Ministry and the Economy Ministry for help, requesting that the government allocate its farmers a piece of land to cultivate, as the immigrants are unable to finance the plot’s purchase themselves; however, government officials agreed to allocate a piece of land for the farmers only after they completed an agricultural training course, according to Almo.At a ceremony in Ramle on Sunday night, Addis Alam’s founders marked the end of the course, developed for the organization by the Economy Ministry’s Maof department. Maof provides a variety of services to small businesses, including expert consultancy and assistance in obtaining financing for such ventures.The course, attended by about 30 would-be farmers, provided the immigrants with training in Amharic about land allocation, loan and grant acquisition and necessary approvals, according to the organization.Maof head Honi Natan praised the initiative and emphasized the importance of the collaborative work of the Economy Ministry and the Agriculture Ministry to move the program forward.“I hope that next time I will meet you in land plots that have been allocated, and we can enjoy the crops you are growing,” Natan said at Sunday’s ceremony.Attendees at the event included Agriculture Minister Uri Ariel and MK Avraham Neguise (Likud), himself an immigrant from Ethiopia.“The vision of traditional Ethiopian agriculture came true,” Neguise said. “It was only thanks to the vision and determination presented here. Entrepreneurship is a welcome thing and we must certainly invest in the issue of entrepreneurship among immigrants.”Ariel likewise praised the organization’s founders for taking the initiative to establish Addis Alam.“One of the greatest challenges in agriculture today is to increase and strengthen the desire to continue the tradition of farming for many years,” Ariel said. “The Addis Alam group is a group of idealistic farmers who are restoring something to its original splendor and want to return to working in farming and give a unique touch to the agriculture industry.”While Addis Alam has not yet received a plot of land from the government, Almo stressed his optimism that the farmers would be growing their traditional crops in the near future.“Now we are waiting for [the agriculture minister] to give us land. Where? He hasn’t yet said,” Almo told the Post. “We are waiting for him to tell us.“Our hope is that, with God’s help, next year we will have a celebration on the land of Addis Alam,” he added.