Mothers on Guard, a coalition of Ethiopian-Israeli mothers who oppose police brutality say they will continue until Alsheich turns in his badge. 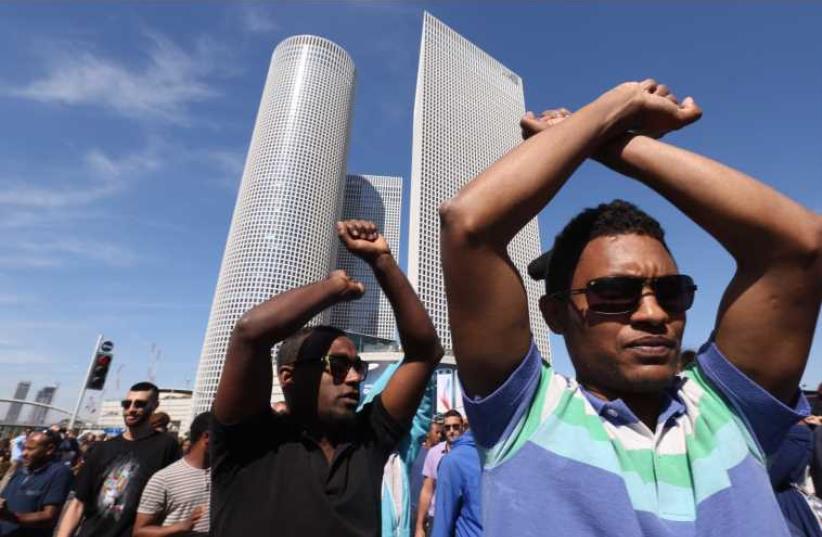 Ethiopian - Israeli protest against racism, police brutality in Tel Aviv.
(photo credit: MARC ISRAEL SELLEM/THE JERUSALEM POST)
Advertisement
Members of the “Mothers on Guard” held protests outside Public Security Minister Gilad Erdan’s house on Wednesday calling for Police Commissioner Roni Alsheich’s resignation. This comes amid increasing demands for Alshiech’s resignation from Ethiopian-Israeli civil society.Mothers on Guard, a coalition of Ethiopian-Israeli mothers who oppose police brutality say they will continue until Alsheich turns in his badge.A spokeswoman for the The Israel Association for Ethiopian Jews, who was present at the protest was adamant that Alsheich must resign, “how am I supposed to encourage my son to succeed, while the police commissioner is saying he is a criminal?,” she stated, “We have a serious problem. He is saying if someone is black he is a criminal and you have to fear him.”Gadi Yibarkan, who was a leader in the 2015 protests against police brutality told Yedioth Ahronot on Tuesday that Israelis of Ethiopian decent “are not migrant workers,” but “Jews who returned to their country after some 2,500 years in exile." He said Alsheich's comments were "not very smart for openly saying that Israel was a racist country.”