‘Even if a missile strikes our operations, we will keep the IDF’s network running’

The head of the Center of Computing and Information Systems talks about ‘augmenting reality’ for IDF fighters. 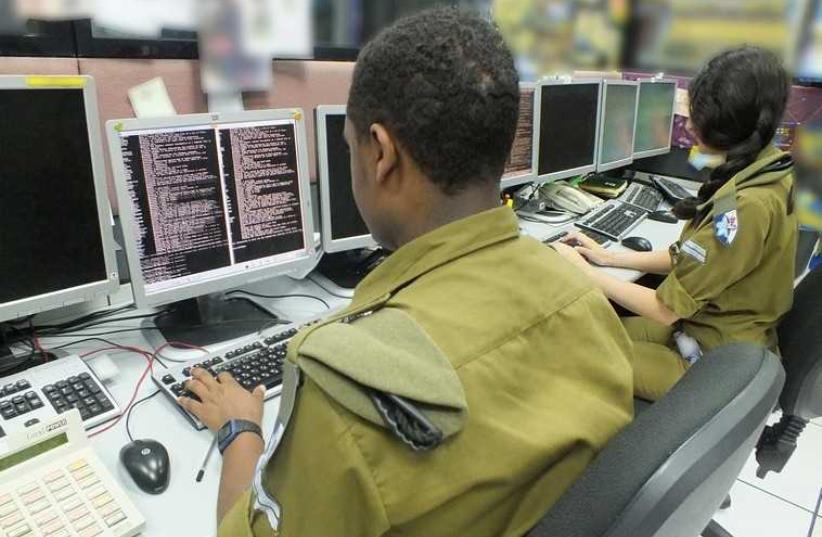 IDF's Center of Computing and Information Systems; soldiers with computers.
(photo credit: IDF)
Advertisement
On any given day, a fighter jet in the air, a field commander patrolling a hostile border, a tank in training, or a spy satellite in orbit will access the IDF’s cross-branch, operational digital network.The network, created by the army’s Center of Computing and Information Systems, known by its Hebrew acronym, MAMRAM, connects all of the military, and dependence on it is growing.Ensuring that the network is up and running at all times has become a paramount goal of the MAMRAM unit, its commander, Col. Hanan Iserovich, told The Jerusalem Post in recent days.Speaking at the unit’s headquarters in Ramat Gan, Iserovich explained the basic functions of the unit.“We deal in research and development for information systems, from servers to databases, all for enabling military operations,” he said.“We deal with tactical interconnectivity, mainly to serve military command centers. Today, we can see the results. A battalion commander in the field can communicate with a combat helicopter not just over the radio but also through a network-based dialogue. They can send video data,” he explained.“Imagine you are a battalion commander in the field. To you, the world looks flat. The helicopter pilot looks at things from above. It could take 15 minutes for both of them to figure out which building they are talking about – each has a different angle of vision,” he continued.With the new network, “I press on a house in the image. It gets a mathematical tag, and this is sent to the pilot. He gets a piece of information that allows him to look at the same place,” Iserovich said. “Finding territory on the map is a difficult process. The infrastructure we built enables the pilot to connect between a map and a photograph.“We have classical program writers, who work on solutions for operational needs. We have application writers and experts in other professions. In an emergency, the whole system joins together,” to make sure that the field battalion commander has access to the network around the clock, he added.“This is complex because of the components that can fail in the process. During emergencies, we must ensure that our information centers are not exposed to the enemy,” Iserovich said. “The enemy will try to harm our command and control. It once tried to target our antennae. Missiles can be fired at our centers.“We will keep running,” he vowed.Backup servers in underground locations are a part of the solution, he said.“The more technological we are, the more we are exposed. Cybersecurity is a paramount aspect of the unit’s activity. We must protect ourselves,” the commander added.“If systems come under cyber attack, we ensure that the network remains available. This is the essence of MAMRAM. Even if a missile strikes our center, the end user will not feel it,” Iserovich said.Along with the military’s growing dependence on the network, the workload faced by MAMRAM personnel has grown exponentially.Workload fatigue can be counteracted by instilling motivation, the commander said. This is achieved by clearly explaining to personnel that what they do is a matter of life and death.“We connect people to the operational mission. This includes taking them on visits to the borders with Gaza and Syria. We invest a lot of energy to make them see the connection between their work and operations,” he said. “We will take them to see Hezbollah through their own eyes. This creates an understanding of the significance of their work.”This also helps the unit retain its members even when defense companies try to hire them, offering far better conditions.“This is the only way we can beat the competition from industry,” said the commander.Iserovich came from the world of combat units. He fought in the Nahal infantry brigade’s reconnaissance battalion and commanded Nahal’s 50th Battalion. He then spent four years in the Arms Department within the C4i (Command and Control, Computers and intelligence) Corps. There, he set up a network-centered combat branch.This led to a range of projects, such as the intelligence-sharing Castle on the Lake encrypted military network and the data sharing network that enables swift strikes on enemy targets.Two years ago, Iserovich became commander of MAMRAM.“I have one foot in the operational world and the other in the technological sphere,” he said. “I understand that technology is an opportunity. What is needed is a merger between these two worlds.”The MAMRAM unit is taking steps toward augmented reality. In the future, fighters will get military applications that feed them with streaming data that enhance their awareness. Connecting the ground forces to the air force and navy has been “a huge project,” Iserovich said.The year 2010 was a watershed moment, Iserovich stated, since before then, most of the IDF’s computerized systems dealt with organizational infrastructure – personnel and logistics.Then, suddenly, small devices began taking over the civilian world, enabling GPS communications, maps, and real-time video.This enabled the military to mass produce its own devices.“We began pushing things to the edge and creating operational capabilities. Since 2010, gradually, our daring has increased. You can see the results in Operation Protective Edge last year, when we conducted network-based combat, using many of the things we have developed,” he said.At any given time, the unit handles hundreds of military video channels that broadcast simultaneously.“Every element can use communications to broadcast,” Iserovich said. “A sensor can be on the surface or in the air. Here, we do the processing. We process signals from the IAF, and send out signals to the Home Front Command that activate rocket alerts,” he continued.“We process the video from the air force, ground forces, and Military Intelligence. This enables all branches to attack targets.”Although the IDF could engage in combat without these systems, its performance would decrease considerably.“We make sure the systems are safeguarded, and that they are always available,” Iserovich said.