Until now, the IDF has on occasion attacked Hamas ministries or police forces, but only when it established that the object in question was being used directly militarily. 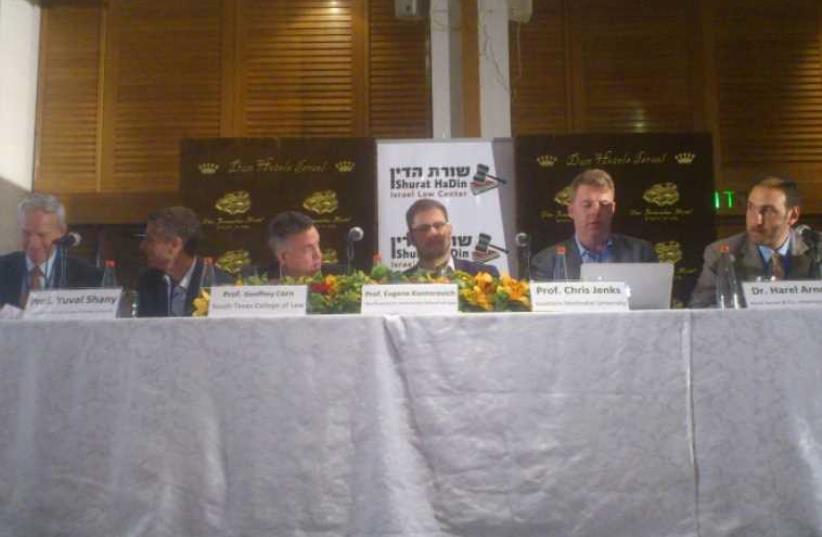 PROF. ROBBIE SABEL (far left) sits with fellow panelists yesterday at the Shurat Hadin conference in Jerusalem
(photo credit: YONAH JEREMY BOB)
Advertisement
A former top Foreign Ministry official speaking at a Shurat Hadin conference on Monday advocated for expanding the list of what can be viewed as legitimate Hamas targets to include its finance ministry and certain other government ministries.He pressed for this even if the ministry in play was not directly involved in fighting “so they will know there is a price to pay” for systematically attacking Israeli civilians and violating the laws of war.The former head of the ministry’s legal division and current Hebrew University Professor Robbie Sabel quickly qualified his statement to exclude from attack government ministries that have no connection whatsoever to fighting, including the Hamas welfare ministry and others.But his primary point was that ministries which indirectly and significantly impact Hamas’s war-making capacity, such as the finance ministry whose funds are likely used to finance terrorist attacks on civilians, should be fair game.Until now, the IDF has on occasion attacked Hamas ministries or police forces, but only when it established that the object in question was being used directly militarily, such as for command and control functions.Asked during a question and answer session by The Jerusalem Post if they agreed with Sabel, the other four panelists in a session on challenges associated with applying the law of armed conflict’s rule of proportionality had differing views.Prof. Geoffrey Corn, a former US army lawyer said that the question was too theoretical as it completely depended on a range of circumstances, such as exactly what role the financing was playing in an adversary’s war-making capabilities, but did not deny that it was possible.Hebrew University Law School Dean Yuval Shani somewhat echoed Corn’s insistence on establishing the specific circumstances and implied that the inclusion of a finance ministry as a legitimate target would not necessarily be a change in the current law, as much as it would be a new application.Prof. Christopher Jenks another former US army lawyer, noted that some countries were making a similar argument about attacking objects connected with the narcotics trade in Afghanistan to the extent that narcotics sales fund Taliban war-making, but added that the argument was in dispute.Northwestern University Prof. Eugene Kontorovich said that he was not sure that being able to attack such a target would make much of a difference, but recognized that Sabel was advocating potentially expanding the list of legitimate targets to include it.The panel on proportionality was one of the most dynamic at the conference.Shani said it was hard to assess proportionality, but that “those of us who know the IDF, and know that the IDF’s decisions are vetted by lawyers, give the IDF the benefit of the doubt,” while others look at the high volume of Palestinian civilian casualties and the small number of legal proceedings and criticize the IDF.In contrast, Shani said, “I have a lot of faith in these [the IDF] investigations and am awaiting their outcome.”Shani also pushed back though at conference participants who he thought were pushing too far to relax the IDF’s moral code in attacking Hamas.Corn said misunderstandings about proportionality and mistakenly equating the concept of excessive with the word disproportionate was making some argue for an unduly strict interpretation of proportionality.He added that militaries should keep, “proportionality where it belongs” with a “limit on [military attack] excesses that simply cannot be justified,” while focusing “efforts on implementing precautionary measures, which mitigate the risk to the civilian population, but enable military commanders to use force” to achieve their missions.Next, Corn said the law could not be thrown out, but that it was also a “disaster to allow it to be distorted” and that a greater focus on precautions could make analyzing military attacks more objective.Kontorovich said that the proportionality analysis needed to be based more on data and comparisons with comparable attack situations and less on vague and lazy generalities.Earlier, former commander of British forces in Afghanistan Col. (res.) Richard Kemp got significant applause for showering the IDF with praise.Kemp said that the “IDF takes even greater care than British soldiers for protecting civilians.”He explained that British soldiers who join the army want to fight, whereas Israelis are conscripts who do not want to fight and this impacts their outlook and actions.Regarding the conference’s topic and mission of changing the laws of war, while most speakers supported or walked around the issue, one speaker, Prof. Rachel Vanlandingham, a former US army lawyer, came out squarely against.She said that those wanting to change the rules “should be careful what they wish for” as many human rights activists want to change the rules, but in the opposite direction, to further limit military action.The conference was also attended by a range of other officials, including former top IDF legal official and judge Amnon Straschnov, senior adviser to cabinet secretary Gil Limon and others.