First Person: Sharing a hospital room – with all sorts 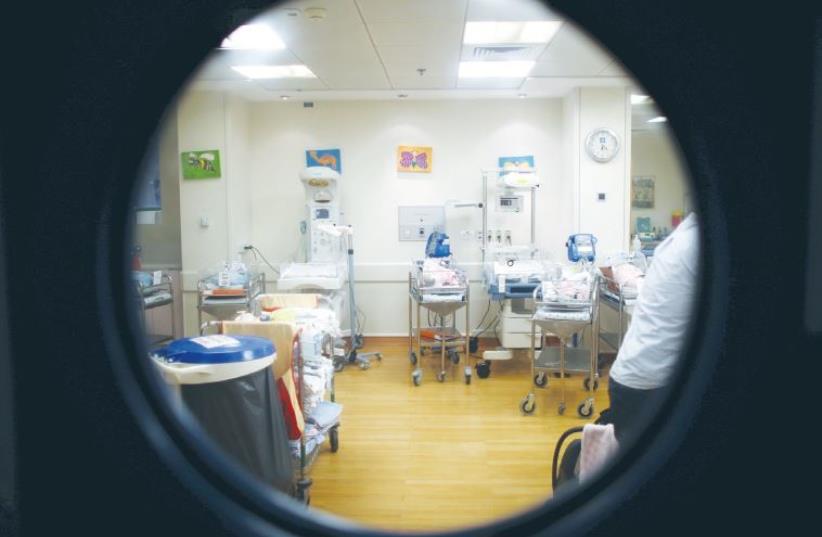 NEWBORN BABIES sleep in a nursery at a Jerusalem hospital in September.
(photo credit: REUTERS)
Advertisement
It was late one December night last year, when my wife texted me from her hospital bed in Tel Aviv with an alarming message – there was a strange man in her room.The man in question was the husband or significant other of a woman who was sharing the recovery room in the maternity room with my wife, who, like her, had just given birth. By this point I had already gone home for the night, during the hours before midnight when they kick the fathers out so the moms can recover.This guy hung back though, and according to my wife, took a shower, made himself at home, and spent the rest of the night and following morning lounging around the room in his pajamas.There was nothing malicious about his squatting in the recovery room, just something oblivious and stupid that betrayed a perplexing level of cluelessness.I’ve thought of that dad this past week, among the furor that has surrounded an Israel Radio report which stated that some hospitals have separated Arab and Jewish mothers in maternity wards after requests by the mothers, something both the hospitals and the Health Ministry have denied.The report last week might have been rather forgettable if not for far-right Jewish Home MK Bezalel Smotrich, who took it upon himself to aggressively defend racial segregation in the maternity wards in a series of tweets. These included the one where he said his wife isn’t a racist but (a sure sign something racist is about to be said) “after giving birth she wants to rest and not have the haflot [large parties] that are typical for Arab womens’ families after birth.”He added that his wife (again, not a racist) doesn’t want “to lie next to someone who just gave birth to a baby who in 20 years might want to murder her baby.”Watching this Twitter train wreck unfold was fascinating, and led me to pay a visit to the maternity ward at Wolfson Hospital in Holon on Thursday morning.The hospital is a rather maligned step-sibling of sorts to Ichilov in central Tel Aviv, and largely serves locals of Jaffa, Bat Yam, Holon and other working class areas of southern Gush Dan. In crime reporting, I typically only hear of it at the end of a brief police report about a random shooting in Jaffa, which ends with the victim being taken to Wolfson. In recent years it has also gained renown for its pediatric cardiology center, which has treated children from across the world, including a number who have been secretly spirited in from Syria for life-saving treatment.On Thursday, though, I was there to see if, like a broken clock, even a back bench extremist like Smotrich can be right twice a day, and if in the maternity ward there are Arab families throwing haflas and firing automatic rifles into the air in celebration.Alas, it was a muted affair on Thursday at the Wolfson maternity ward, where in the quiet, peaceful corridors, the exhausted and elated parents and families of newborns milled around short on sleep and not too up to date on the Israel Radio report.Boris and Dalia from Holon had just become the parents of twin girls and said that they’d heard talk about the report but that it wasn’t really relevant for their experience.“We had an Indian woman in our ward, that’s not really the same though,” Boris said, adding that they don’t care about the ethnicity of those being treated next to them, though he did add one caveat.“I heard at Meir [Hospital in Kfar Saba] it’s like that, but not here,” a reference to a hospital that serves not only the suburban Jews from Kfar Saba and Ra’anana but also Arab families from the often rough and tumble villages and cities of the Triangle region.A young father from Hod Hasharon named Amichai was walking to the elevator not long after his wife had given birth to a baby boy and seemed, hesitantly, to show some understanding for Smotrich’s comments.“Look, it is two different cultures. If it’s just a few people coming after the birth that’s fine but if it’s somebody bringing their whole village afterwards, that’s different.”Perhaps it was the heady mixture of sleep deprivation, elation and fear, but for the most part, people I spoke to in the maternity ward seemed unaware of the report and dismissive of the need for segregation.Grandmother Marcelle Nadaf said “I’ve already lived more than 50 years in Jaffa with Arabs, I speak Arabic, we live with them all the time no problems, why would this bother me at all if they’re here?” she said, leaving the maternity ward where her daughter was expecting to give birth in the coming hours.The man kicking his feet up in his pajamas in my wife’s recovery room at Ichilov Hospital and the dads who kept finishing the Turkish coffee I brought to the cafeteria weren’t Arab, they were just inconsiderate and at no point did their ethnicity seem to play a factor in it. Nor, for that matter, were the religious Jewish families who came in large numbers and gave the guards hell whenever visiting hours were over.That’s typically how it goes here – there’s no ethnic component that determines whether someone is inconsiderate or a pain in the neck – it’s an equal opportunity gene that affects members of all the Abrahamic religions.Perhaps that can explain the almost universal condemnation of Smotrich, even from politicians whose own politics may be racist, or who advocate final-status agreements that entail separation between Jews and Palestinians. Separation between the peoples is in many ways the norm here, but on a personal level, between perfect strangers experiencing one of the most overwhelming and emotional events in their life? It seems unnatural, bizarre, and may just be something that the majority of Israelis don’t seem to have time for, especially not after a sleepless night of emotion, pain and jubilation.