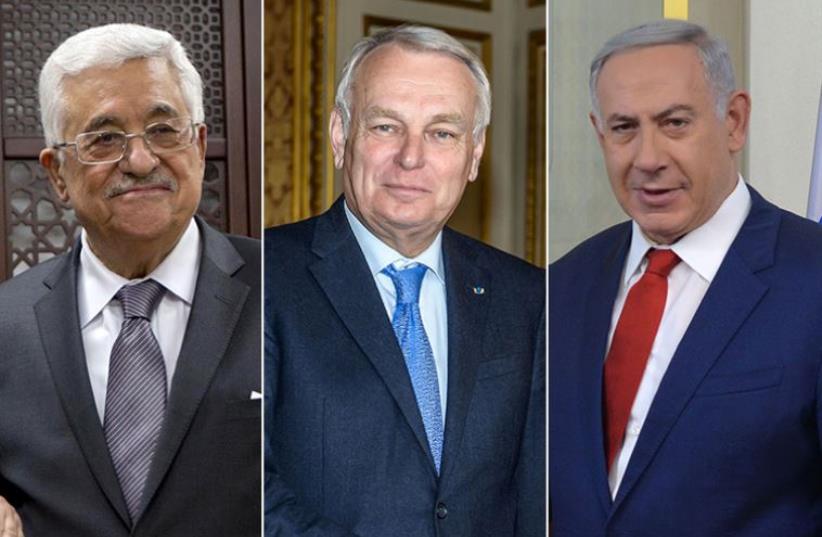 Netanyahu, Ayrault and Abbas
(photo credit: KOBI GIDEON/GPO,REUTERS)
Advertisement
An international peace process is necessary to stop the deteriorating Israeli-Palestinian conflict, French Foreign Minister Jean-Marc Ayrault told reporters on Sunday after separately briefing Prime Minister Benjamin Netanyahu and Palestinian Authority President Mahmoud Abbas on his country’s initiative to jump-start direct talks.“The process is frozen, so there is a need for international intervention because the situation is getting worse day by day,” he told reporters at a press conference in Jerusalem before he boarded a plane for China.Speaking in French, with the help of a Hebrew translator, Ayrault described a two-step process that includes a May 30 ministerial meeting with select countries to be followed by a larger international peace conference in the fall.“We have to act before it’s too late,” he warned.In advance of the ministerial meeting, the Middle East Quartet (the US, the EU, the UN and Russia) is set to publish, on May 25, a report on the Israeli-Palestinian conflict that will form the basis for the work at the conference.France also has formulated a position paper it has yet to make public.The ministerial gathering will be very much a working meeting that will set the agenda for the months leading up to the fall conference, including a diagnosis of the problems and an outline of how a new peace process should unfold.Some 20 countries have been invited to the ministerial meetings; the list of attendees has yet to be finalized.Israeli and Palestinian ministers have not been invited to the May 30 parley, but will be included in the larger peace conference in the fall.Abbas has welcomed the initiative, while Netanyahu has rejected it as problematic, in part because it is led by France, whose actions at the United Nations have left Israel wondering if it can be a fair broker.Last month, France supported a UNESCO resolution that ignores Jewish ties to the Temple Mount.“The scandalous UNESCO decision, which was supported by France, that does not recognize the Jewish People’s ties – which are thousands of years old – to the Temple Mount, casts a shadow on the fairness of any forum that France tries to convene,” Netanyahu told his weekly cabinet meeting on Sunday morning following his meeting with Ayrault.“He told me that this decision stemmed from a misunderstanding and that he would personally see to it that it does not recur. I told him that the only way to advance a true peace between us and the Palestinians is by means of direct negotiations between us and them, without preconditions,” Netanyahu said.Netanyahu told Ayrault he feared the French initiative would only strengthen Abbas’s resolve not to resume direct negotiations.“Our experience with history shows that only this way did we achieve peace with Egypt and Jordan and that any other attempt only makes peace more remote and gives the Palestinians an escape hatch to avoid confronting the root of the conflict, which is nonrecognition of the State of Israel,” Netanyahu told the cabinet.“[The Palestinians] simply avoid negotiating with us as part of their desire to avoid resolving the root of the conflict, which is recognizing the national state of the Jewish people, i.e. the State of Israel,” Netanyahu said.Ayrault later told reporters he hoped Netanyahu would get on board with the process by the time the fall peace conference is held.He was not surprised by Netanyahu’s words, because the prime minister’s opinion had already been well publicized in the media in advance of his arrival, Ayrault said.Netanyahu’s description is correct, Ayrault said. He is waiting for Abbas to respond to his invitation for talks, but this is not a new situation.The status quo cannot continue, so something else must happen, such as an internalized process that would include confidence-building measures to bring both sides to the table.“I know that Netanyahu does not agree. What I explained to him, is that things will happen in two stages, first the ministerial meeting and then a peace conference with the Israelis and the Palestinians to find a way out of this frozen situation,” Ayrault said.During their conversation he stressed to Netanyahu the importance of French-Israeli ties.“I came with a clear message, one that has always been true for me in my heart, of close friendship toward Israel. I told this to Netanyahu immediately,” Ayrault said.He stressed to Netanyahu that Paris believed that Israel had a right to live in peace and security alongside a sovereign Palestinian state with permanent borders, reminding him that France had looked out for Israel’s security concerns during the Iran talks last year.It is out of concern for Israel’s security that France wants to push forward a new initiative, he said. The threats that could prevent a two-state solution from occurring have grown, the French foreign minister added.The absence of direct talks, continued settlement building and violence against both Israelis and Palestinians have imperiled such a solution, while the lack of progress has fueled frustrations, which, in turn, has fed a growing anger and is slowly killing any sense of hope, he said.France also feels an obligation to act given that it is one of five permanent members of the United Nations Security Council, Ayrault said.Israel is not the only country skeptical about the process; the US, which has brokered all past peace processes, including the last one that fell apart in April 2014, has yet to confirm its participation or even to state its support for the process.US Secretary of State John Kerry spoke with both Abbas and Netanyahu by telephone prior to Ayrault’s arrival in Israel on Saturday night.PA Foreign Minister Riyad al-Maliki hinted that the US might end up attending the conference, telling reporters after Ayrault’s meeting with Abbas that the May meeting might be delayed by a few days to allow more participants to take part.The French foreign minister told reporters on Sunday that the US’s participation was important and that it would be willing to rearrange the date of the ministerial meeting to accommodate the schedule of US attendees.“The issue here won’t be a technical one,” he said.