Greek FM; Israel one of Greece's closest friends in world, 'certainly in the region' 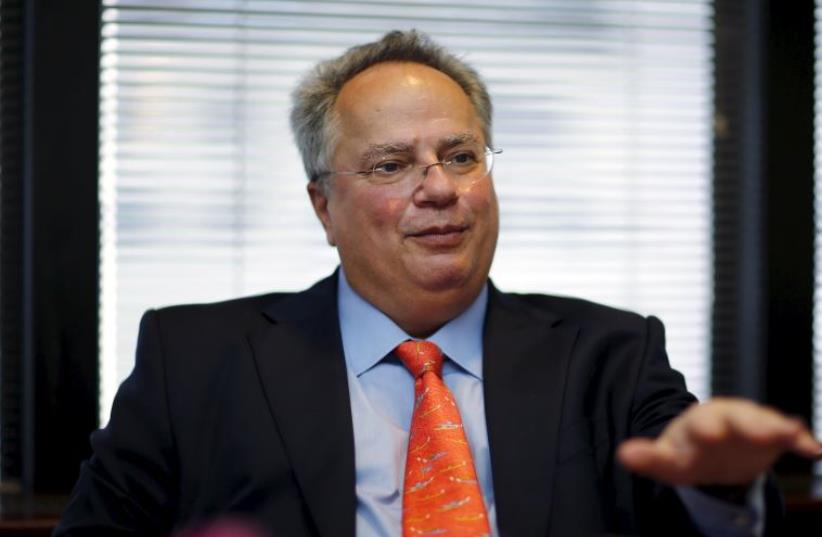 Greek Foreign Minister Nikos Kotzias
(photo credit: REUTERS)
Advertisement
Even amid massive uncertainty over the future of Greece and its economy, Greek Foreign Minister Nikos Kotzias held discussions on Monday with National Infrastructure, Energy and Water Minister Yuval Steinitz about future energy cooperation.Kotzias, who arrived in Israel on Sunday despite the dramatic referendum at home, discussed with Steinitz the possibility of creating an Israeli- Greek-Cyprus energy corridor and the laying of a gas pipeline between the three countries as a way of helping the Greek economy.The potential plan to lay a natural-gas pipeline stretching from Israel to Cyprus to Greece would provide a gateway to the European market for Israel. Thus far, Israel only has signed full-fledged and preliminary gas export arrangements with its immediate neighbors, Egypt and Jordan, though much discussion has taken place over the past few years about other opportunities for export to countries such as Cyprus, Greece and Turkey.In November, then energy minister and now Interior Minister Silvan Shalom expressed his support for a gas pipeline from Israel to Cyprus to Greece.On Monday, after also meeting with Kotzias, Shalom once again spoke of the idea of building such a pipeline, with a significant portion of the funding coming from the European Union.“The pipeline would make possible an additional source of gas for Europe, which is reliable and available,” Shalom said.In the past, an additional infrastructural plan between Israel, Cyprus and Greece touted by Shalom would involve the construction of a 270-km. underwater electricity cable from Israel to Cyprus and another 600-km. one stretching from Cyprus to Greece enabling a two-way power flow of up to 2,000 megawatts.At the start of Kotzias’s meeting with Steinitz on Monday, which also dealt with wider regional issues, Steinitz said Israel was carefully following the developments in Greece, which is “popular” among Israelis, and that Israel wished Greece well and expressing the country’s hopes that it would emerge from the crisis quickly.Thanking Steinitz for his comments, Kotzias said Israel was one of Greece’s closest friends in the world, “and certainly in the region.”