Absent a successful appeal, Azaria is due to start serving his 18-month jail sentence for manslaughter as of March 5. 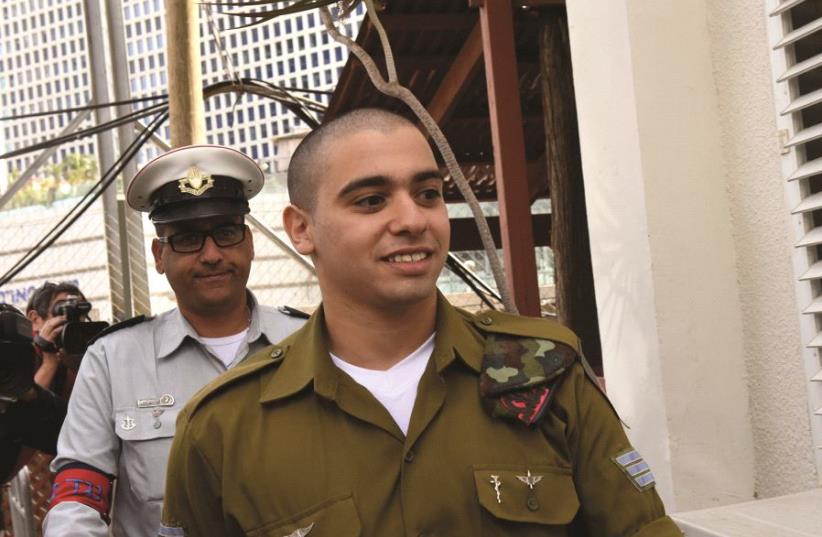 Le soldat Elor Azaria
(photo credit: REUTERS)
Advertisement
Pandemonium broke out once again in the Hebron shooter case, with most of IDF soldier Elor Azaria’s defense team quitting in protest over an appeal he filed on Wednesday against his manslaughter conviction.
Elor Azaria at sentencing hearing on Feb. 23 , 2017 (credit: REUTERS)
Absent a successful appeal, Azaria is due to start serving his 18-month jail sentence for manslaughter as of March 5.Azaria was sentenced in February for killing Palestinian terrorist Abdel Fatah al-Sharif on March 24, 2015, as he lay nearly motionless on the ground, around 10 minutes after Sharif had attacked two soldiers.At a press conference on Wednesday after filing the appeal, Azaria’s father, Charlie, said that the IDF was “trying to scare us, but we will not give up.”Charlie was referring to a meeting on Sunday between Azaria’s main defense lawyers throughout the trial, Ilan Katz and Eyal Besserglick, and Military Advocate-General Brig.-Gen. Sharon Afek. Charlie, and Elor’s only remaining lawyer, Yoram Sheftel, claimed that Afek tried to intimidate the family and prevent the filing of an appeal, threatening that the IDF itself would file a counter-appeal seeking a stiffer jail sentence if the family appealed.The IDF rejected this interpretation of the Sunday meeting, while refusing to discuss the actual content of the meeting.Katz and Besserglick also rejected Charlie Azaria’s and Sheftel’s claims. They said that they had opposed an appeal based on a realistic professional legal assessment, weighing the potential costs and benefits.It is not unusual for the state or IDF prosecution to file a counter-appeal if a defendant appeals, and negotiations over those scenarios are commonplace, with prosecutors justifying the negotiations on the grounds that they believe they would win on appeal, and may only decline to appeal out of mercy and to save additional litigation time and energy.Azaria’s appeal seemed focused on overturning the lower IDF trial court’s decision that Azaria had essentially incriminated himself by confessing to two different IDF personnel that he had killed Palestinian terrorist Sharif out of revenge for Sharif stabbing his friend 10 minutes earlier.At trial, both Azaria’s commander Maj. Tom Naaman and his co-soldier and close friend T.M. had testified that Azaria told them he shot Sharif out of revenge.T.M.’s testimony was particularly damaging, as he was clearly on Azaria’s side and tried in every way possible to help Azaria during his testimony.Countering this narrative, the appeal argued that Naaman and T.M. had been pressed by the Military Police to incriminate Azaria and had even been fed similar narratives by the Military Police to get them to testify about his confessions.The appeal states that the police improperly tampered with Naaman and T.M.’s minds and narratives to get them to help convict Azaria as part of a process polluted by then-defense minister Moshe Ya’alon, who accused Azaria of murder publicly, even before the IDF prosecution had decided on a charge.Supporting this argument, the appeal quotes Naaman as stating that until the B’Tselem video of the shooting was posted and went viral across the globe, the IDF was still leaning toward taking only disciplinary action against Azaria.It also notes that none of the extensive video footage shows Azaria confessing or even speaking to anyone. In other words, he could not have confessed if it is not on the video which the IDF prosecution has argued shows all key aspects of the case.In an unusual move, the appeal starts with a nonlegal, populist tone, declaring to the appeals court that “80% of the Zionist nation wants the immediate release of the appellant... the soldier, the son of all of us, from prison to freedom.”Azaria’s case has split the country, with most politicians calling for him to be pardoned.But Azaria cannot seek a pardon until he exhausts his rights to appeal, starting with the IDF Appeals Court and possibly going up to the High Court of Justice.