Female students with an aptitude for science and technology are increasingly opting to study different aspects of these subjects. 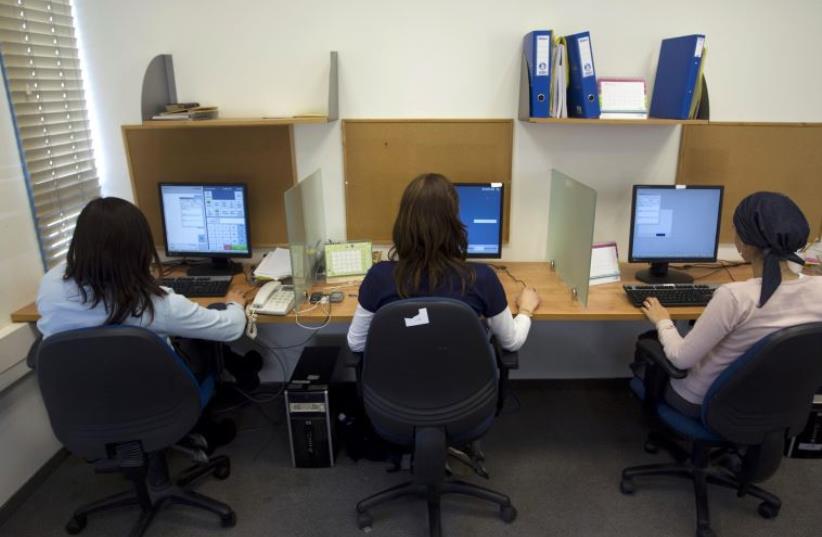 Ultra-Orthodox women work at Matrix Global, a hi-tech company, in the West Bank Jewish settlement of Modiin Illit April 3, 2011
(photo credit: REUTERS)
Advertisement
Just as law, which in Israel was long-regarded as a generally male domain, has become saturated with female judges, prosecutors and lawyers, not to mention a Justice Minister, the same trend may be true of hi-tech. This will certainly be true if other large-scale enterprises follow the example of Israel Aerospace Industries, which is recruiting future hi-tech engineers, innovators and programmers on the distaff side, while they are still in high school.Three years ago, IAI put out a call to high schools saying it was looking for female students of math, science, technology and engineering who might be interested in working for the company after completing their compulsory army duty.From more than 1,000 applicants, including from Druse schools, top management at IAI chose 300 young women and brought them together for an intensive three-month course, exposing them to much of what IAI does, giving them projects to work on in pairs and in groups and provided them mentors to guide them.The students were understandably very bright, and in some cases felt isolated in their various schools because they were either so much smarter than their classmates or because they were the only ones who had such a deep-seated interest in science and technology. When they met each other at IAI, they were thrilled to find intellectual soul mates.A group of these students, accompanied by IAI director general Yossi Weiss and chairman of the IAI board of directors Harel Locker, came to the President’s Residence in Jerusalem on Monday to discuss the future roles of women in hi-tech. The group included graduates of the first, second and third courses, including one from the Druse village of Abu Snan in the Galilee who spoke of how much they had learned in so short a time, how much pleasure they had derived from working together with other girls on projects, and how the whole experience had motivated them to continue with science and technology studies when they went to university.A graduate of the first course is already studying medical engineering.One from the second course, who at age 15 left home in Italy to live in Israel and learned to speak Hebrew fluently, was grateful for the opportunity to study science and technology in Israel. She has lost none of her passion for the country, even though her parents are still in Italy, and is looking forward to the day when as a science and technology university graduate, she can begin to make a contribution to the country.Although women are well-integrated into Israel’s work force, said Locker, not enough of them have been absorbed, and they have a lot to give to the country. “We want to integrate talented women into the technologies of Israel Aerospace Industries.”IAI already employs more than 6,000 hi-tech engineers, said Weiss, but has room for many more.He, and other senior people at IAI believed that women are a valuable resource that had not been properly tapped.So they invited 300 teenagers who would soon be women to see how they reacted in a working and learning environment.The results convinced them that there was definitely a place for women in the hi-tech sector of the Start-Up Nation. Female students with an aptitude for science and technology are increasingly opting to study different aspects of these subjects, said Weiss.President Reuven Rivlin concurred, and said that women are just as intellectually bright as men – sometimes more so, and that their talents are vitally needed in specific professions.Locker said that as a democracy, Israel is obligated to give females equal opportunities in education for the professions which they want to pursue.