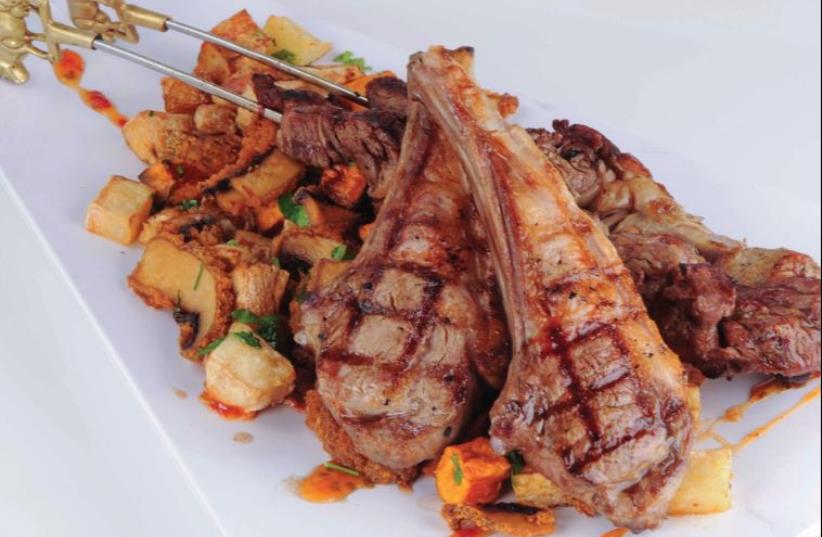 Bistro 56 restaurant
(photo credit: PR)
Advertisement
In a huge blow to the recent phenomenon of independent kashrut authorities, the High Court of Justice ruled on Monday that restaurants may not use the words “kosher” and “under supervision,” or present themselves as a kosher establishment in any way, unless they have a kashrut certificate from the rabbinate.The decision will strengthen the monopoly of the chief rabbinate over kashrut certification, since, until now, independent kashrut authorities have been able to issue supervision certificates and use the word “under supervision.”In particular, the ruling will have a heavy, and possibly crippling impact on the independent kashrut-licensing authority Hashgacha Pratit, which in recent years has provided Orthodox kashrut supervision for restaurants and businesses that did not want to use the rabbinate’s supervision.Hashgacha Pratit said in response to the decision that it would continue to operate and provide kashrut supervision to “the public, which has lost all faith in the rabbinate.”Because of reservations expressed by the justices about the rabbinate kashrut system, they ruled that the decision was effective for only two years.Hashgacha Pratit, which provides kashrut supervision to 26 restaurants in Jerusalem, Tel Aviv, Herzliya, and Kfar Saba, was established several years ago as an alternative to the rabbinate’s services, which have been strongly criticized for numerous problematic practices.The Law against Kashrut Fraud states, however, that only the chief rabbinate, through its local rabbinate branches, may issue kashrut certificates and only restaurants that have a rabbinate certificate may represent themselves in writing as kosher establishments.In May 2015, then attorney-general Yehuda Weinstein issued a ruling explicitly permitting restaurants and other culinary businesses to declare themselves to be “under supervision” even if the supervisors are not licensed by the rabbinate.The High Court decision, in a two-to-one ruling, reverses that decision, however, and closes this loophole – a step that will make Hashgacha Pratit’s continued operations extremely difficult, if not impossible.The ruling came in response to a petition filed several years ago by the Israel Religious Action Center of the Reform Movement in Israel on behalf of two restaurant owners who objected to the practices of kashrut supervisors from the Jerusalem rabbinate and decided to halt their rabbinate supervision.They stated, however, that they followed kashrut laws in their establishments and continued to advertise themselves as kosher restaurants.The restaurants were fined for continuing to advertise themselves as kosher without the rabbinate supervision, in accordance with the Law against Kashrut Fraud.The petition sought to have the fines annulled, arguing that, although the purpose of the Law against Kashrut Fraud was justifiable, the means for preventing fraud disproportionately harm the choice of restaurant owners to conduct and market their business as they see fit, even if they are not perpetrating fraud, i.e. they are in fact kosher.The petitioners also argued that if a restaurant presents itself as kosher and observes kashrut laws, the restaurant owners should not be defined as deceiving its customers by telling them the establishment is kosher and, therefore, should not be viewed as violating any laws.Justice Noam Sohlberg wrote in the ruling that kashrut laws are complex and require a great deal of knowledge and training to implement properly. He also wrote that a restaurant owner has an inherent interest of to present the business as kosher to increase the number of its potential customers, while at the same time kashrut observance incurs a significant financial cost.Therefore, Sohlberg said, the reasoning for the Law against Kashrut Fraud to prevent consumers from being misled is sound.The justice acknowledged that the law does do a certain amount of injury to the Basic Law: Freedom of Occupation, but said that such injury was unavoidable given the purpose of the law, and argued that the law does not ban a restaurant from presenting itself as kosher at all, but only from doing so without the authorization of the rabbinate.Sohlberg ruled, therefore, that the Law against Kashrut Fraud was constitutional and that without a kashrut license from the rabbinate, a business may not present itself as kosher, even if it does so in a way that does not mention the word “kosher.”He said, however, that the ruling was not designed to rubber stamp the rabbinate’s kashrut system, saying there were serious malfunctions in the current system.He mentioned kashrut supervisors who visit the restaurants under their auspices for just a few minutes a week; who do their work improperly; demand payment under the table; and supervisors who will not eat in the establishments they supervise.Sephardi Chief Rabbi Yitzhak Yosef welcomed the ruling, saying it would prevent consumers from being deceived, and said the rabbinate was making efforts every day to make things easier for consumers and business owners.Ashkenazi Chief Rabbi David Lau said, “Any decision that would have alternative kashrut licenses, some of which are fictitious, would have led to severe deception of the general public.”The petitioning restaurants said, however, that the ruling gave the rabbinate “an unprecedented monopoly over kashrut,” and pointed out that it went against the position of the previous attorney general.They added that, owing to the difference of opinion between the three justices, they would request an additional hearing in front of an enlarged panel of justices.”Hashgacha Pratit added, “Despite the decision we are not going anywhere...As the most professional and principled body in the country in the field of kashrut, we will not abandon the public to the hands of the rabbinate and will continue to provide quality kashrut services to Israeli citizens.”