His last words before being shot and killed were: ‘I will remain a Jew’

The Jewish Agency noted that more than 200 Jews have been murdered in anti-Semitic attacks since Israel’s establishment in 1948. 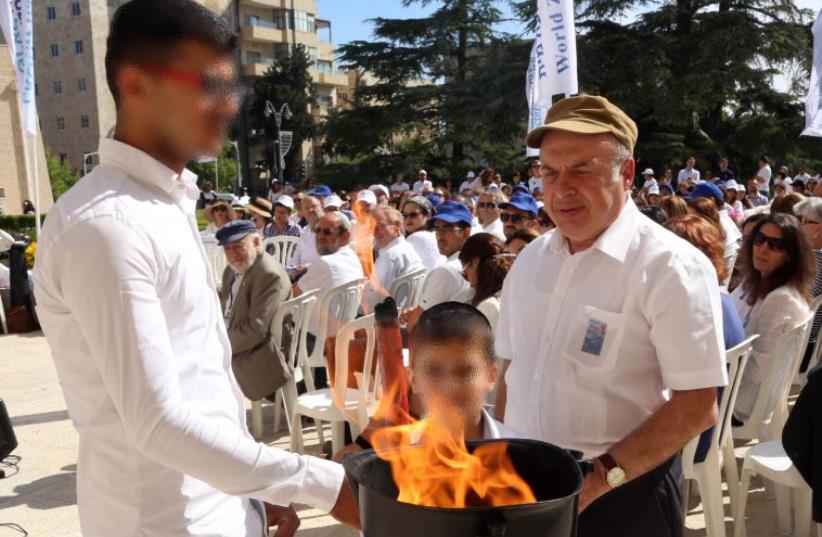 Jewish Agency Chairman Natan Sharansky kindles a memorial flame together with two members of the Nahari family
(photo credit: SASSON TIRAM)
Advertisement
The Jewish Agency honored a Yemenite Jew slain in the Raydah marketplace in 2008 at its annual Remembrance Day ceremony on Wednesday.Moshe Yaish Nahari, a 35-year-old Yemenite father of nine, was shot dead in December 2008 in Raydah when he went to buy groceries for Shabbat.Nahari, a teacher, and a leader of his local community, who was also responsible for ritual slaughter and circumcision was approached by Abdel Aziz Yehia Hamoud al-Abdi, who called out to him to accept the message of Islam. Nahari refused, telling his assailant, “You remain a Muslim, and I’ll remain a Jew.”After the murder, five of his children were brought to Israel by the Jewish Agency and their only contact with their mother and their younger siblings was via occasional phone calls.In August 2012, the family was reunited when the Jewish Agency brought the widow Louza Nahari and her four youngest children to Israel.Six months later they were joined by Moshe’s parents, Yisrael and Temeja Nahari. The family now lives in Bnei Brak.Jewish Agency chairman Natan Sharansky said Nahari’s story reminded him of that of US journalist Daniel Pearl whose last words to his captors in Pakistan before hey murdered him were, “I am a Jew.” Pearl was commemorated by the Jewish Agency three years ago.Sharansky noted that despite the increase in terrorist attacks, “Jews remain Jews.” He noted that this year more than 60,000 young people came to Israel on Jewish Agency programs.“Our weapon of defense is aliya,” he said, citing an immigration figure of 30,000 over the past year, mostly from France, Argentina and Ukraine.Leah Nahari, 16, spoke of her father as someone who was personable, popular and able to instantly connect with anyone. He was also a very pious Jew and “he was unwilling to give up his heritage and his tradition.”Her family had been shattered by her father’s death, she said. They were all afraid to go outside and were guarded by security authorities.The separation from her mother and younger siblings was painful. “I can’t express the joy we felt when our mother and younger siblings were brought to Israel,” she said. “We learned to live again.”Avraham Duvdevani, the chairman of the World Zionist Organization, said that over the past year 68 names had been added to the list of fallen soldiers and victims of terrorism since 1860, when Jews were first allowed to live outside the walls of Jerusalem’s Old City, which in total numbers 23,477. When each of these soldiers went to the army, they were anonymous individuals, he said, “but after they fell, they emerged from anonymity as the stories of their lives were told and their characters were described.”Sharansky, aided by Sasson and Gavriel Nahari lit the memorial flame and later, accompanied by Daniel and Yosef Nahari, he placed the first of several wreaths in front of a memorial board bearing the names of Diaspora Jews who had been murdered.