The theft comes weeks prior Jewish holiday of Rosh Hashanah, when honey is used by many families to celebrate the new year. 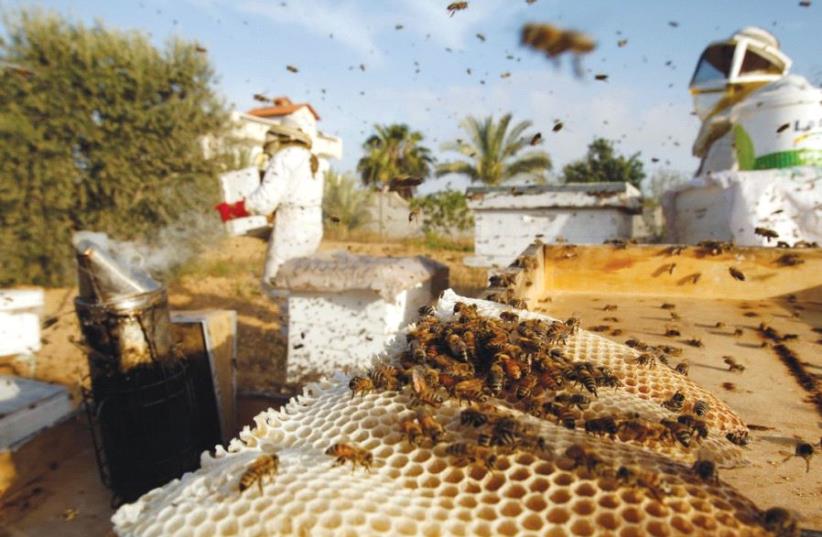 GLOBAL AGRICULTURAL production has taken a hit in recent years due to declining bee populations.
(photo credit: REUTERS)
Advertisement
Thousands of shekels' worth of honeybee hives with honeycombs were stolen from properties in the Western Galilee region of northern Israel, according to a press release on Thursday from the Honey Council and Organization of Beekeepers in Israel.In the last month, there has been a sharp increase in the theft of honeycombs and hives at the height of storage season, in light of the upcoming Jewish holiday of Rosh Hashanah, when honey is used by many families to celebrate the Jewish new year.Beekeeper Noga Reuven, who hails from Moshav Manot, was one of the victims of theft when she arrived at her hives Thursday to find that over 60 of them were stolen, while the others that remained were heavily damaged. Reuven's hives were previously stolen last month as well, accounting for a loss of thousands of shekels."Unfortunately, every year this season there are thefts of the big honey hives. This year there is an increase in the number of thefts. This morning I arrived at the hives in the Western Galilee. The sight of the ruined hives ... is a shaky and difficult experience to see, which broke my heart," Reuven said.  "The members of the beekeeper community around the country are also experiencing this, and we hope that the Israeli government will put agriculture in its priorities, because without the honeybee there will be no pollination, and thus there will be no fruits and vegetables."The Honey Council and Organization of Beekeepers in Israel said that thefts started to rise in July, with a total loss of 400 hives, 800 honeycombs and approximately 8500 kilograms of honey, a major increase from the previous year, when 100 hives were stolen during the same period. The total loss this year is estimated to be in the hundreds of thousands of shekels.The organization added that the purpose of hive and honeycomb thefts is for the illegal honey businesses ahead of the Jewish holidays, since the product plays a central role during the holidays. Zeev Meidan, CEO of the Honey Council, said that "The phenomenon of theft in the honey industry is widespread and very severe. The nature of the thefts in the last month of honeycombs relates to severe economic distress due to the corona, and it is evident that the increase was done prior to the holidays and festivals, and at a time when the hive is considered very economical and full of honey."The Unit for Enforcement and Investigations in the Ministry of Agriculture is investigating the honey thefts, aimed towards capturing thieves, deterring future thefts and ensuring the preservation of the honey industry, a critical agricultural sector in Israel. In addition, the honeybee itself is instrumental for the pollination of flowers and plants. The theft of raw agricultural products is a common phenomenon around the world. In 2011 and 2012, criminals in the Canadian province of Quebec stole nearly 3,000 tons of maple syrup valued at CAD $18.7 million.