A doctoral candidate made an unprecedented discovery during excavations in the Hula Valley. 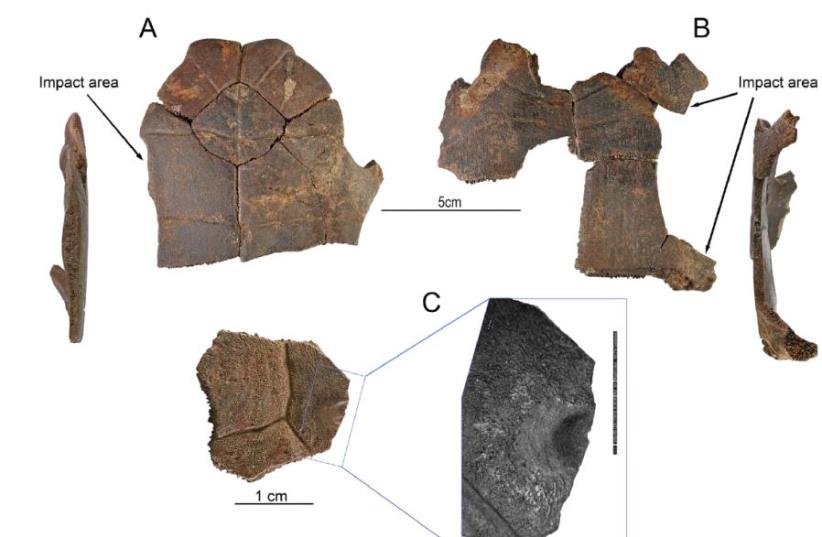 Freshwater turtle remains from 60,000 years ago.
(photo credit: ASSAF UZAN)
Advertisement
A Hebrew University of Jerusalem doctoral candidate made an unprecedented discovery during excavations in the Hula Valley, proving humans hunted freshwater turtles in Israel 60,000 years ago.The findings, published in the Journal of Archeological Science: Reports, were made by Rebecca Biton following years of excavations and analysis of the turtle remains from the Middle Paleolithic site, adjacent to the paleo-Lake Hula and swamps, located in the northern Jordan Valley.Biton, who made international headlines three years ago after discovering the remains of an extinct frog species in the country, studies at the university’s Institute of Archeology.She’s including the recent analysis as a chapter in her dissertation, which she is submitting next week.According to the young researcher, the earliest evidence known of humans exploiting freshwater turtles for sustenance dated 1 million years ago in Africa, making her discovery a quantum leap in her field of study.“I’m studying amphibians and reptiles from the Hula Valley and looking at various sites, the oldest of which is from 800,000 years ago,” Biton said on Tuesday. “I was looking at the bones of the amphibians and reptiles to understand which species were in the Hula Valley 60,000 years ago, and if the humans back then exploited them somehow.”Biton noted that there are two known species of turtles indigenous to the area: the Mediterranean spur-thighed tortoise, which lives on land; and the Western Caspian turtle (freshwater turtle), which inhabits water. However, while it’s well-documented that tortoises were consumed by humans in Israel, there was never evidence until Biton discovered more than 300 bones from both species during digs at the site every summer between 2008 and 2014.“In Israel, at every archeological site you will find some evidence of the exploitation of tortoises, which do not have much meat, but were consumed,” she said, adding that deer, gazelle and cows were also well-known food staples during the Middle Paleolithic Period.“This is the first time that we found any clear evidence in Israel that freshwater turtles were also exploited for food,” Biton said.Among the bones unearthed in the three-to-four-meter digs near the water, Biton said 60 were identified as freshwater turtle remains.“This is important because it shows that humans not only exploited animals on land, like the tortoise; but also from the Hula Lake and swamps,” she said. “They not only hunted on land, but also in the water before learning to fish.”Biton said the remains illustrate that humans shattered the turtles’ shell and carefully removed the meat using a flint knife.“They took the turtle and smashed the shell and cooked whatever meat they could extract,” she said.Biton’s adviser, Dr. Rivka Rabinovich, curator and manager of HU’s paleontology collection, praised the PhD candidate, whose dissertation is titled: “An Archeo-zoological Study of Amphibians and Reptiles from Pleistocene Archeological Sites in the Hula Valley.”“Rebecca also made an important discovery that made a lot of noise three years ago when she identified the bones of the extinct Lagonia frog in the Hula Valley,” said Rabinovich.“She is going to be a great researcher,” added Rabinovich. “I believe in her.”