Hundreds of thousands take to the outdoors for Succot

Israelis enjoy the parks and forests of the country, despite litter. 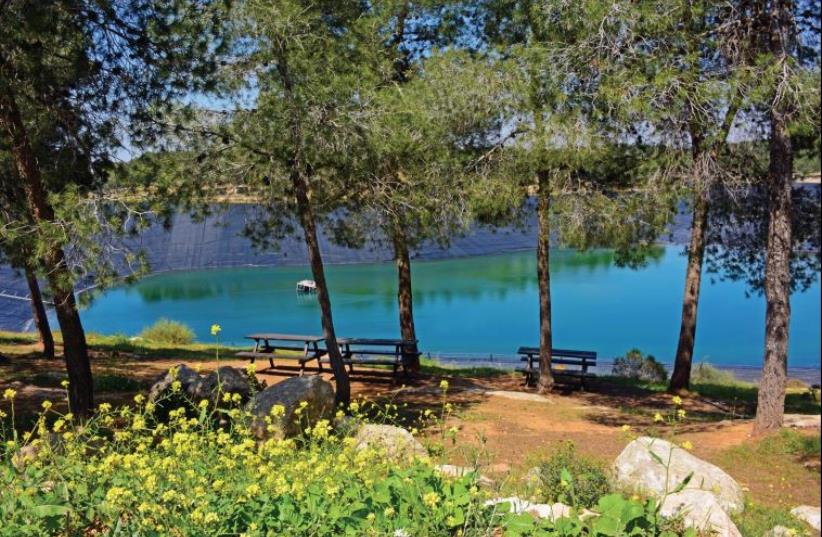 A good place for a picnic is the Yatir water reservoir
(photo credit: ITSIK MAROM)
Advertisement
Amid the expansive green pine trees in central Israel’s Hulda Forest, a familiar smell of roasted meats wafted through the still warm autumn air on Tuesday afternoon.“We are friends from the neighborhood, and we decided to have a fun day,” Ketty Ezra told The Jerusalem Post from her picnic table, shared with two other families from Holon.“We collected the kids, took food and got into the car,” she continued.“We came for a little bit of quiet, without our phones.”“And to juggle,” a small boy added.All across Israel, travelers took to the country’s forests, nature reserves and national parks on Tuesday to celebrate Hol Hamoed, or intermediate days of Succot, in the outdoors. The Israel Nature and Parks Authority reported about 150,000 visitors at its nature reserves and national parks, while Keren Kayemeth LeIsrael-Jewish National Fund said that hundreds of thousands of people arrived to the organization’s forests and parks.“We wanted to be a little out in nature,” said Niv Namer, who came to Hulda with his extended family from Hod Hasharon, Yavne and San Francisco. “It’s a nice forest, so we like it here.”While Hulda Forest serves as a beacon for holiday picnickers and hikers in central Israel, the KKLJNF site also houses a memorial for Theodor Herzl. After Herzl’s death in 1904, the forest at Hulda was planted, and a building now called the “Herzl House” was constructed in his honor. Today, the forest spans more than 20 hectares (49 acres), and boasts a marked trail for visitors to walk among the trees.Within the forest is a pool at the edge of an olive grove, which supplied water to Jerusalem during the War of Independence through a pipeline after the city’s main water supply was cut off, according to KKL-JNF. Other places of note within Hulda Forest are a stone quarry, a grove of trees for Rachel the Poetess and a memorial for Efraim Chisik, who defended Hulda from attackers in 1929, when the site was an isolated farm.While not too crowded on Tuesday, families filled up the large picnic tables that pepper the forest that afternoon, and enjoyed food, games and music together.Blanketing the forest floor, however, was a combination of crisp leaves, dried out pine needles and he carelessly strewn food wrappers and cigarette butts that are an all too frequent marker of Succot celebrations.“Relative to previous years, it’s cleaner, but it’s not clean,” said Tsahi Namer, who was visiting his family from San Francisco. “In nature they don’t grow cigarettes on trees. And also the flies – if it was clean, there wouldn’t be flies. But it’s an improvement, in the right direction.”Dalia Namer said that despite the litter still visible on the ground, this improvement was likely due to the plastic garbage bags distributed by the rangers at the entrance to the site.At the nearby picnic table where Ketty Ezra’s family members were enjoying their afternoon, she and her friends from Holon likewise discussed the litter problem that plagues Israel’s parks and forests.Ezra’s neighbor Hili Muchtar said she felt that Hulda in particular looked “relatively clean” this year and praised the rangers for bringing bags to picnickers, but she too stressed that the situation could be better.On the other hand, their friend Eran Bar Sela told the Post that he was annoyed by the presence of litter at the site.“At the entrance, a very nice man is standing giving out bags,” he said.“So it’s possible to clean up, and anyone who doesn’t is disgusting.”Among Israel Nature and Parks Authority parks and nature reserves, the heaviest traffic on Tuesday was recorded at Caesarea National Park, Ein Gedi Nature Reserve, Zippori National Park, Masada National Park, the Stalactite Cave, the Banias and Ein Prat, the authority said.Some of the most popular KKLJNF sites in the North on Tuesday were Biriya Forest, Goren Park, Agamon Hahula, Adamit Park, Park Hayarden and Emek Hatchelet.The most commonly visited sites in the country’s Center included Ben Shemen Forest, Aminadav Forest, Sataf Forest, Nahal Hashofet Park, the Eshtaol Forests, Canada Park, British Park, Ilanot Forest, Haruvit Forest and Rosh Haayin Forest. Meanwhile, in the South, Israelis arrived en masse to Hamalachim- Shahariya Forest, Lahav Forest, Nahal Gerar and Yeroham Park, KKL-JNF reported.