Prosecution asks for 3- to 5-year jail term, as Azaria’s lawyers ask conviction be thrown out 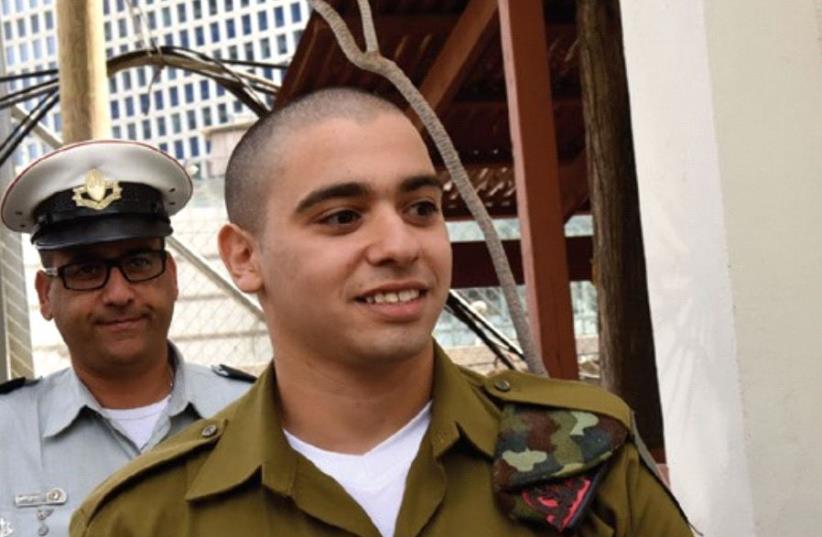 Elor Azaria
(photo credit: REUTERS)
Advertisement
The Jaffa Military Court on Tuesday will deliver its sentence for the manslaughter conviction of IDF Sgt. Elor Azaria, who shot and killed Palestinian terrorist Abdel Fatah al-Sharif as he lay wounded in a Hebron street.The shooting, which occurred around 10 minutes after Sharif was wounded while attacking an IDF checkpoint on March 24, 2015, was filmed. The video went viral, leading the International Criminal Court and countries around the world to follow the criminal proceedings.The IDF prosecution has requested a three-to-five year sentence, based on past manslaughter cases. Azaria’s lawyers, Ilan Katz and Eyal Besserglick, have requested no jail time and even asked the court to toss out the conviction because of alleged pressure by the IDF on Azaria’s family not to appeal the ruling.Tweets by jeremybob1

At Azaria’s conviction hearing at Tel Aviv Military Court on January 3, hundreds of supporters protested outside, clashing with police, counter- protesters and media.Reports broke on January 11 about a meeting between Azaria’s Kfir Brigade battalion commander, Col. Guy Hazot, and his father, Charlie Azaria, during which the IDF allegedly offered lenient treatment to end the public relations headaches and social divisions the case created in the army and throughout the country.The defense team brought Hazot to the Jaffa Military Court as a witness on January 31 in a special hearing about the impact of his meeting on the proceedings. The defense hoped to use his testimony to get the court to toss the conviction, or to give a lenient sentence in light of allegations that the IDF, through Hazot, tried to pressure Azaria into expressing regret in exchange for more lenient treatment.But despite Katz and Besserglick’s efforts to tear Hazot down or to get him to implicate members of the IDF high command in a conspiracy against Azaria, he took sole responsibility for the dialogue.He said he thought, after reading how damning the court’s conviction of Azaria was, that the period directly following the ruling was the last opportunity to save Azaria from a longer jail sentence, if he were willing to cooperate.Regarding sentencing, IDF Prosecutor Lt.-Col. Nadav Weissman has argued that any time spent in open detention on an army base should not count toward jail time.
Trial of Sgt. Elor Azaria
On one hand, Weissman said that Azaria could be dealt with severely, as he has expressed no regret and killed with intent. On the other hand, he said Azaria deserves some leniency from the 20-year maximum sentence, since he shot a terrorist in a moment of high stress and had been regarded as a distinguished soldier up until the incident.Azaria would face an uphill battle if he were to appeal the conviction, as the Jaffa Military Court head, Judge Col. Maya Heller, carefully addressed each of the defense’s arguments.Alternatively, Azaria could ask IDF Chief of Staff Lt.-Gen.Gadi Eisenkot for a pardon. If Eisenkot refuses the request, Azaria’s last shot at avoiding jail time would be to ask Defense Minister Avigdor Liberman to recommend that President Reuben Rivlin pardon him.Domestically, a pardon would be popular. Internationally, it could create a new scandal.In the incident, Sharif stabbed another soldier, a friend of Azaria’s, but was then shot several times and fell to the ground. By the time Azaria arrived on the scene, other IDF personnel in the area did not view Sharif as a threat.Azaria’s job as a medic was to attend to the wounded, but instead the world watched as he shot Sharif in the head, killing him execution-style.Azaria claimed self-defense, saying he was concerned Sharif would attack again with a knife or was wearing a concealed explosive vest. However, the court rejected all his defenses as being invented after the fact and convicted him based on his original explanation – that he shot Sharif out of revenge.They pointed to testimony of his officers and, critically, of his friend and fellow soldier T.M., who was at the scene and testified that Azaria said Sharif needed to be killed out of revenge for stabbing a fellow soldier.The defense’s cross-examination of T.M. failed to refute his testimony, the judges contended.Azaria’s confession, that he was motivated by revenge to kill, is uniquely, objectively credible, the court said, adding that he did not mention fear of an explosive device until after the fact.Heller took the prosecution’s side, saying that Azaria changed his story five times and that the final story lacked credibility.The court also accepted paramedic D.S.’s testimony that Azaria never mentioned a bomb, saying that the witness had no incentive to lie. The judges added that Azaria had been evasive during cross-examination.
Advertisement
Subscribe for our daily newsletter