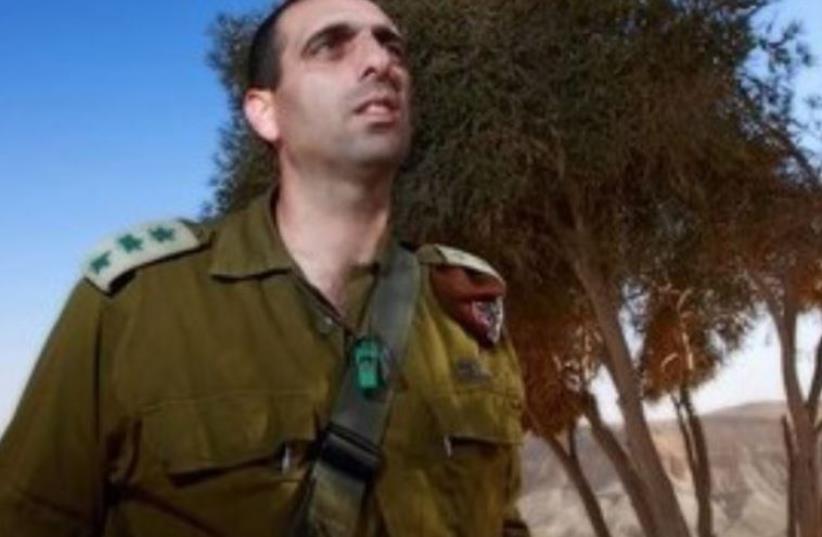 IDF Brig.-Gen. (res.) Ofek Buchris
(photo credit: ELI DASSA)
Advertisement
The IDF legal division on Thursday filed an indictment against Brig.-Gen. Ofek Buchris, 47, on three counts of rape and 13 counts of other sex crimes between July 2012 and January 2013, bringing a saga which has captivated the country for five months to a decisive point.The decision was made personally by Military Advocate- General Brig.-Gen. Sharon Afek with a “heavy heart” in light of Buchris’s stellar record as a combat officer.Buchris and his lawyer, IDF Public Defender Col. (res.) Asher Halperin, responded that, “We are saddened by the decision... and believe it is a mistake,” noting that they had found holes in the prosecution’s case, and that they are “sure they would succeed in the struggle to prove the innocence” of Buchris.The Jerusalem Post has learned that the extensive hearings and Afek’s delay in deciding whether to indict Buchris could indicate that he saw the case as borderline, and opted to let the courts make the final decision.According to the indictment filed by top military prosecutor, Col. Sharon Zigzagi, Buchris perpetrated three counts of rape along with seven other sex crimes against ‘A.,” a low-ranking soldier serving under him, and another six sex crimes against “L.,” an officer working for him.The highly graphic indictment describes Buchris forcing A. to have sexual relations with him in multiple positions, as well as to perform sexual acts on him.Some of the repeated incidents are said to have taken place over a period of years, but the indictment specifically identifies Buchris as having raped A. on April 1, 2011, at a weekend rental home at Bnei Yehuda, a moshav near Katzrin on the Golan Heights.A. also accused Buchris of touching her without her consent all over her body, specifically in April 2011.The indictment states Buchris sent A. text messages about his missing her, his kissing her until another officer walked into the room, and his touching her breasts and other parts of her body during drives while his chauffeur was present.The indictment does not describe A. as resisting, but rather as freezing up and neither responding nor cooperating.In one instance, A. told Buchris that she was having her period and so he refrained from touching her in her groin area, but touched her on the rest of her body.In another instance, A.warned Buchris that someone might walk into the room, and that he should stop and leave the door open.L. resisted far more, according to the indictment.On March 6, 2012, Buchris pinned L. to the wall and started caressing her breasts, with L. telling him “No, no.This is forbidden,” and eventually putting her hands up between their bodies. Once L.put up this resistance, Buchris stopped, and the two of them conducted a meeting that had been scheduled.Between January and June 2012, Buchris repeatedly undressed in front of L. He lay in bed with her until she left the room, not wanting to have sexual relations with him.On several other instances, Buchris kissed and touched L.against her will. L. eventually left the area so that he would stop. In one instance, he asked her to go up to the bedroom to have sexual relations with him, and she responded “That is not happening.”On September 9, 2013, L. was involved in a minor car crash with Buchris’s car. He suggested her could help her with the incident and again tried to touch her against her will.She left telling him she did not need his help.Apart from the 2013 incident, all the alleged incidents occurred when Buchris was a colonel and commander of the Golani Brigade. The last incident took place after he had been promoted to brigadier- general.Thursday’s indictment comes after a June 21 hearing between Buchris, Afek and Halperin. At a hearing of only a few hours, Halperin requested to present additional evidence to Afek, who allowed one more day to the unusually long pre-indictment hearings.Buchris had previously been accused of five incidents of rape by A and of sexual harassment by L. The allegations, which broke in early March, have already cost him a promotion to be head of IDF operations within the Operations Directorate, and have halted the career of an officer who many saw as a future IDF chief of staff.Reports indicated that Afek was leaning toward indicting him, though reports have varied on how serious the charges might be.The Buchris case has seen a gamut of dramatic moments, including leaks to the media, lie detector tests, and a confrontation between Buchris and his accusers. A.’s testimony has held up under extreme scrutiny, and has been backed by other witnesses. As well, Buchris has not successfully pinned on her any motivation for A. to bring false testimony.In addition, the lawyers for the two women said at the time that IDF lawyers, including top military prosecutor Col. Sharon Zigagi, told them that the lie detector tests also showed that Buchris was not telling the entire truth in denying the complaints against him.