The move to the South stems from changes to the IDF outlined by the Gideon multi-year working plan. 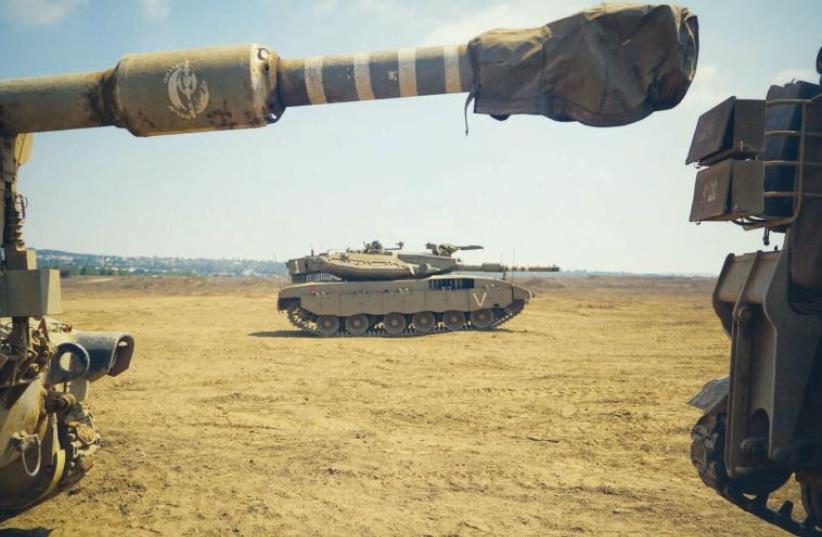 IDF tanks
(photo credit: IDF SPOKESMAN’S UNIT)
Advertisement
This week the IDF’s Armored Division 162, also known as the Steel Formation, officially moved from the Central Command, where it has been based for nearly 40 years, to the Southern Command, marking a significant step in realizing plans by IDF Chief of Staff Lt.-Gen. Gadi Eisenkot to prepare the military for future challenges on Israel’s borders.In the face of hybrid, heavily armed terrorist armies building up their capabilities to disrupt daily life in Israel, Eisenkot is planning to develop three multi-arena, all-purpose wartime divisions, designed to swiftly mobilize and take the fight to the enemy.Division 162 is one of the three. The move to the South stems from changes to the IDF outlined by the Gideon multi-year working plan, an army source told The Jerusalem Post on Wednesday. This is part of the response the IDF is preparing against current and future expected challenges, he added.“Southern Command received a quality division. It is clear that it will be significant in future conflicts,” the source said.Armored Division 162 left the Southern Command 35 years ago, after the peace treaty with Egypt, moving to the Central Command. It has taken part in all of Israel’s wars, and is now returning to the Southern Command, though its form has changed considerably since it was last there.Receiving it has been a “very complex procedure, with many aspects, including logistics, operations and personnel,” lasting several months, the source added.The Steel Formation moved south six months ahead of schedule, and received the Givati infantry brigade under its command as well. It will no longer be in charge of the Jordan Valley Territorial Brigade, which remains under the Central Command and secures the area from the northern Dead Sea to Beit She’an.Although based in the Southern Command, Division 162 units will focus on preparing for battle on any front. The division is made up of Nahal and Givati infantry brigades, the 401 Armored Corps brigade, the 215 Artillery Corps brigade and the 179 Reserve Armored Corps brigade.In a ceremony at the Armored Corps Museum in Latrun on Tuesday, Eisenkot shed further light on the significance of the move, saying it “strengthens the IDF’s offensive capability and subordinates it to the Southern Command to improve its ability to crush the enemy, and completes a process to strengthen the three central offensive divisions,” Eisenkot said.“These divisions will act anywhere – in the North, South and Center – wherever we will need them, and we want them better equipped, more ready, and more trained, with excellent personnel who know how to act in any mission we give them,” he added.“This will strengthen our deterrence and the IDF’s defensive capability, which has become more relevant now than in the past,” Eisenkot said.OC Southern Command Maj.-Gen. Eyal Zamir said at the ceremony that the division “knows how to carry out defensive and offensive battles in all arenas, to maneuver in depth of the battlefield, and to activate firepower in complex areas against existing challenges and those taking shape on Israel’s borders.“In the Southern Command, we are following, preparing and adapting our operational response to potential threats in various sectors. Since the end of Operation Protective Edge, Hamas has been trying to rebuild its professional capabilities.We are following developments in the Gaza Strip and we are prepared for any scenario. We will respond to any attempt to harm our communities and our forces,” Zamir warned.