There have been many European delegations that have visited the facility on matters of prisoners' rights, but this was the first time that an official had come to learn from its work methods. 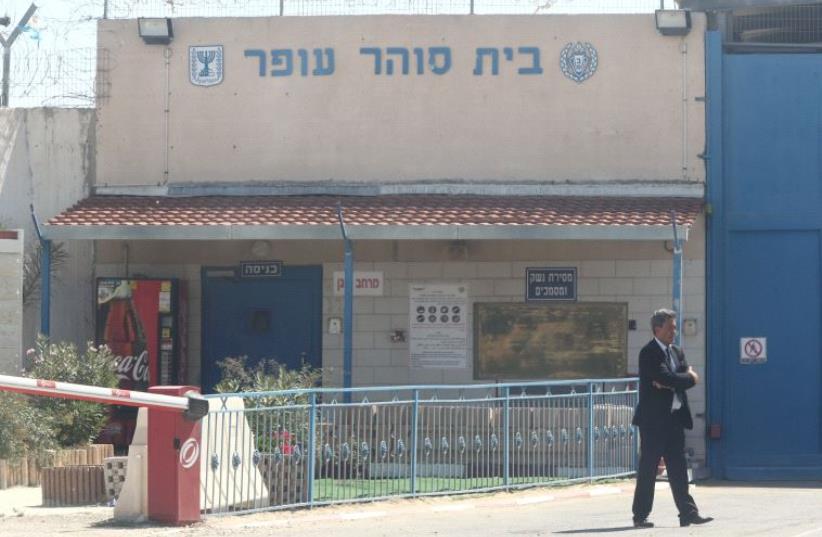 French opposition MP Georges Fenech at Ofer Prison, September 15, 2016
(photo credit: MARC ISRAEL SELLEM)
Advertisement
A French politician and top anti-terrorism expert who has urged his country to adopt the practice of administrative detention visited Israel’s Ofer Prison on Thursday morning, to learn more about how Israel uses the controversial procedure.The Jerusalem Post has learned that the official, Georges Fenech, the French counter- terrorism “czar” and head of the country’s inquiries into its failure to block major recent terrorist attacks and an opposition MP, met with IDF Judea and Samaria Court President Col. Netanel Benishu during his visit.There have been many European and UN delegations that have visited the West Bank facility in the past to criticize Israel for its treatment of Palestinian- defendants and detainees, but this was the first time that an official had come to learn from the facility’s work methods.The IDF Spokesperson’s Unit had no official comment.A spokeswoman at the French Embassy said that Fenech made the visit as a member of parliament, and that the embassy was not involved in organizing it or in any of the logistics behind it.She had no comment when asked whether the embassy believed the visit was a positive or negative development.Many security detainees, both tried and those under administrative detention, are held at the prison located west of Jerusalem on Route 443 in the West Bank.The Israeli practice of administrative detention sidesteps the right to a criminal trial with more streamlined judicial proceedings, and allows the presentation of secret evidence in court. However, detention can only occur if approved by a court at least once every six months. The IDF says that it is only used in extreme cases to prevent expected attacks, and that it is permitted under the Fourth Geneva Convention.Critics say that the around 700 Palestinians in administrative detention is far too high a number to comply with international law limitations.Most of the international community, especially in Europe, until now has been critical of Israel’s administrative detention policy, though the US, Australia and some others have undertaken similar measures.On Wednesday, Fenech dropped a political bombshell by asserting that in France “we need to have administrative detention.” Without specifying a time, he announced that he planned to visit Israel’s detention center at Ofer Prison as a possible model.The official made the comments at the IDC Herzliya Conference on Counter-Terrorism on the university’s campus.“I know as a judge that it is hard to reduce civil liberties,” he said. “But when someone is on the S register [in France], not the 15,000 [suspicious] people, the first few hundred on the list – should we wait for them to act or should we act before them? If you want to insist, you can wait for them to have a lawyer, but in the meantime people are killed. Or you can sacrifice a little of your freedom, arrest them before they act, put them in detention centers to evaluate how dangerous they are.”The French lawmaker added that “all of this is in the framework of the law.”Fenech noted how “people said you want to build a French Guantanamo. Of course not.There is no detention without control. We don’t want people humiliated. We want the minister of the interior, when he wants to decide to put someone in administrative detention, that within 48 hours a judge will approve the decision with information provided by the intelligence services.”Further, he said, “the detention will be limited in time. This is the main debate today in France.”He explained that the opposition, including his preferred candidate for president Nicholas Sarkozy, wants to maintain democracy, but thinks France must do far more to protect the country against terrorism, even if it means rolling back some freedoms. In contrast, he said France’s ruling Socialist Party has made only minor and insufficient legal changes to fight terrorism.“On the Left, they think everything has been done, and if we do any more, we will hurt democracy. In the opposition, like me, we think democracy must adapt to the threat,” he said.Under current polling, the opposition would win the 2017 elections.Earlier, Fenech also complimented Israel’s security regime at Ben-Gurion Airport as an example for other countries to copy to improve their security, and noted his meeting with the Shin Bet (Israel Security Agency) to improve terrorism-fighting techniques.Besides his discussion of Israel, Fenech also gave a detailed postmortem on what had gone wrong for French intelligence to miss stopping the major terrorist attacks in recent years and what needed to change.Herb Keinon contributed to this report.