While ties between the Czech Republic and Israel have not always been close, Prague was crucial in the establishment of the Jewish State and was its major arms supplier. 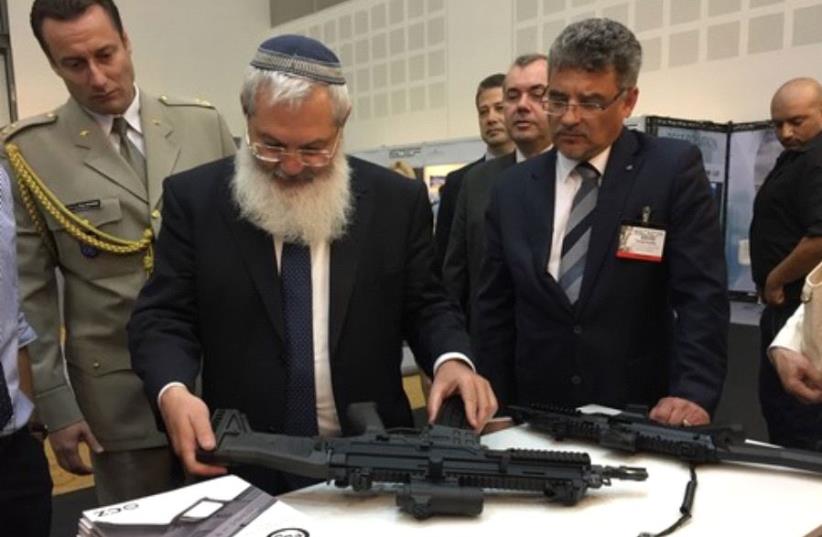 Deputy Defense Minister Eli Ben-Dahan examines assault rifles alongside Czech Deputy Defence Minister, Mr. Tomáš Kuchta, Czech Military and Air Attache LTC Pavel Petrasek and Deputy Head of Mission Karel Pazourek
(photo credit: MIRI SHIMONOVITZ)
Advertisement
The Czech Republic is planning to send a defense industries attaché to Tel Aviv who will be in charge of research, development and defense purchases, the country’s deputy defense minister, Tomás Kuchta, told The Jerusalem Post on Tuesday.The posting is part of a pilot project that will begin in August, Kuchta said at a three-day annual Israel Defense Exhibition, or ISDEF. The eighth annual show attracts officials and delegates from dozens of countries and this year will feature more than 250 exhibits.Kuchta said that Prague “decided on Israel because, in the defense sector as well as the defense industry, it’s the best country to partner and cooperate with.”In January, Czech Defense Minister Martin Stropnicky said that Prague would spend some $7.1 billion over the next 10 years to upgrade the country’s armed forces. According to Kuchta, the new position will help Czech defense companies know their Israeli counterparts better and vice versa.Deputy Defense Minister Eli Ben-Dahan, who opened the ISDEF exhibition on Tuesday, said that while Israel is a small country, it is a “powerhouse in the field of security and the fight against terrorism.”“Terrorism has no mercy,” Ben-Dahan said. “The struggle against Islamic terrorism requires military power, political power and, above all, cooperation between states.”While ties between the Czech Republic and Israel have not always been close, Prague was crucial in the establishment of the Jewish state and was its major arms supplier, providing almost 35,000 rifles, pistols, machine guns, mortars, ammunitions, bombs and 25 Avia S-199 fighter jets to the fledgling IDF.“The Czech Republic was there for Israel at a crucial moment,” Deputy Head of Mission Karel Pazourek told the Post.Prague is currently in the midst of finalizing a NIS 500m.deal with Israel’s IAI/ELTA systems for eight 3D mobile air-defense radars to cover the country.The production of the systems will be a joint Israel-Czech project with 70% of the system made in Israel and the other 30% by Czech military electronics company RETIA which has partnered with ELTA for the past few years.The eight ELM-2084 multi-mission radar (MMR) systems allows for the monitoring, tracking and interception of several airborne projectiles simultaneously at an altitude between 100 meters to 3,000 meters and cover a wide area of about 250 kilometers.The ELM-2084 MMR system, which is used by the Canadian Armed Forces as well as by the IDF – as part of the newly operational David’s Sling and Iron Dome anti-missile defense systems – is expected to be delivered no later than 2021 and will replace obsolete Soviet-made radars that the Czech military received in 1991.In late May, the Czech parliament approved a resolution recognizing Jerusalem as the capital of Israel. It also condemned UNESCO following its recent anti-Israel resolutions and called for the nation’s government to stop paying membership fees to the UN agency until the organization stops its anti-Israel bias.It has also endorsed a two-state solution and called for direct Israeli-Palestinian peace negotiations without preconditions.Prime Minister Benjamin Netanyahu praised Prague for a “correct, worthy and courageous decision that others should copy.”