Some 35 teams of fire fighters and eight fire-extinguishing planes worked to quell the flames and prevent them from reaching offices. 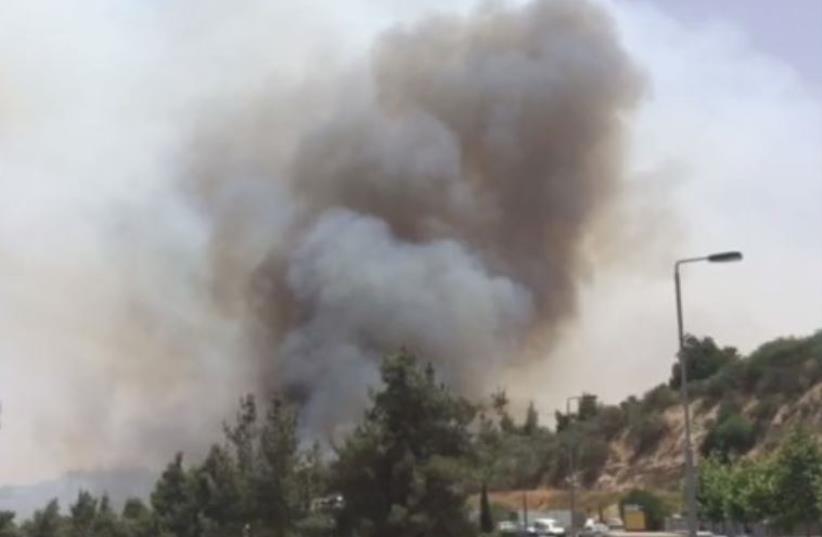 Forest fire in Jerusalem, June 15, 2016
(photo credit: screenshot)
Advertisement
Dozens of firefighting teams worked to control a forest fire that broke out Wednesday near the offices of the Israel Electric Corporation in the Givat Shaul neighborhood near the entrance to Jerusalem. A spokeswoman for the Israel Electric Corporation told The Jerusalem Post that the fire had approached their Jerusalem district offices but had not reached the building. All workers were evacuated as a precaution.
Fire in Jerusalem
She added that the fire was not expected to cause service disruptions.Employees at the President's Residence were also evacuated from their offices in light of the fire. Due to the blaze, authorities also cordoned off the major Route 1 thoroughfare that runs from Tel Aviv to Jerusalem.Some 35 teams of fire fighters and eight fire-extinguishing planes worked to quell the blaze and prevent them from reaching the structures as winds spread the flames in the Jerusalem Forest area and Givat Shaul's industrial zone.As high temperatures surged, emergency crews have requested residents in the area to remain indoors and shutter their homes to prevent smoke inhalation.