Israel invests less in healthcare than most OECD countries 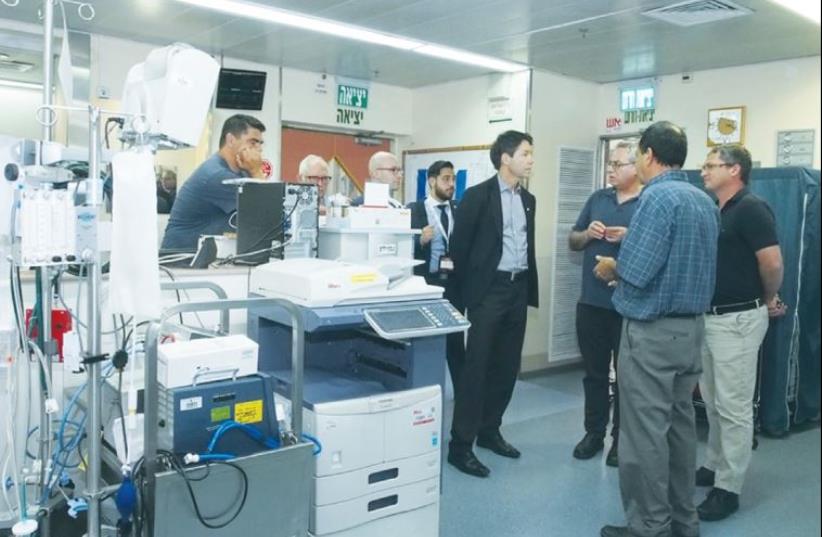 ONTARIO HEALTH MINISTER Dr. Eric Hoskins (center) visits Wolfson Medical Center in Holon last week for a close up look at its famed Save a Child’s Heart program.
(photo credit: SACH)
Advertisement
Israel invests less in healthcare than almost any other OECD country, according to a new report comparing key indicators for population health and health system performance across OECD members, and candidate and partner countries.According to “Health at a Glance,” which was published on Thursday, health expenditure in Israel is around $2,780 per person per year, while the average OECD country spends $4,000 per person. Spending is only about 7.5% of GDP – also lower than the average for OECD countries, which is 8.8%. This average has basically remained unchanged since 2013, the report said.Only 15 countries spend less than Israel. These include Turkey, Mexico and India.In contrast, the United States spends the equivalent of more than $10,000 for each resident – higher than all other OECD countries and representing an expenditure of about 16% of GDP.The report’s authors recommend that financial reforms be implemented in OECD countries to enable long-term financial sustainability of the healthcare system.It is expected that Israel will only increase spending in the next decade by about 1.3% to reach 8.8% of GDP by 2030.Challenges in Israel’s healthcare system and its infrastructure have continuously been reported in recent months, and the OECD report reiterated that the lack of public money invested in the system continues to limit expansion.“The report shows the future trends expected in the country,” the Health Ministry said in a release on Thursday. “Here, the picture shows that there will be some major challenges in the system in the coming years.”For example, despite the number of general hospital beds in Israel continuing to rise in comparison to population growth during the last four-and-a-half years, the country is not keeping up. Israel remains near the bottom of the list of OECD countries; there are three beds per 1,000 Israelis, compared to an average of 4.7 hospital beds per 1,000 people in the rest of the OECD nations.There is also an acute lack of medical personnel, and Israel’s doctors are aging, too. The report shows that the proportion of doctors in Israel aged 55 and over is among the highest in the OECD countries and stands at about 50%, with only Italy ahead of Israel at a rate of 55%.In the US, the proportion of doctors aged 55 and over is 37%. Turkey is at the bottom of the list with only 18%.Israel has only 5.1 nurses per 1,000 people, as opposed to the OECD average of 8.8.Strikingly, Israel has the highest mortality rate from avoidable causes, which includes death by some cancers that are preventable through public health measures – the main causes of preventable mortality (32% of all preventable deaths).Other major preventable causes were external ones such as road accidents and suicide (25%); heart attack, stroke and other circulatory diseases (19%); alcohol and drug-related deaths (9%); and some respiratory diseases such as influenza and chronic obstructive pulmonary disease (8%).Respiratory illnesses, such as influenza and pneumonia, have caused more mortality in recent years than before, especially in the elderly. This should not be surprising to Israelis; there was a countrywide delay in the arrival of flu vaccines to Israel this year.Flu vaccines are usually distributed from September in most years, but they just arrived and began to be distributed this week.The good news is that despite the high rate of mortality by avoidable causes, life expectancy in Israel, which stands at 82.6 years, is higher than the average in the OECD countries.And, when it comes to certain diseases, Israel fares well. The diabetes rate among adults in Israel was 6.4%, low compared to Mexico (13.1%) or even the United States (10.8%).Obesity rates continue to rise in most OECD countries. In Israel, the proportion of overweight or obese adults is 51%, slightly lower than the average in enterprise countries (56%). However, the proportion of overweight/obese children between the ages of five and nine is 38% – 5% more than the average of 33%.Deputy Health Minister Yaacov Litzman said that he welcomed the findings of the report, “which again point to the system’s excellence, as well as the challenges that are expected in coming years.“I am committed to implementing needed changes with the establishment of a new government,” he concluded.